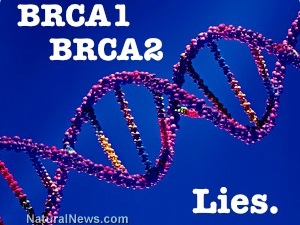 Hour 1 – Angelina Jolie and the breast cancer that wasn’t there and more!

Conventional medicine openly admits to confusion over BRCA1 gene “It is important to note, however, that most research related to BRCA1 and BRCA2 has been done on large families with many individuals affected by cancer. Estimates of breast and ovarian cancer risk associated with BRCA1 and BRCA2 mutations have been calculated from studies of these families. Because family members share a proportion of their genes and, often, their environment, it is possible that the large number of cancer cases seen in these families may be due in part to other genetic or environmental factors. Therefore, risk estimates that are based on families with many affected members may not accurately reflect the levels of risk for BRCA1 and BRCA2 mutation carriers in the general population. In addition, no data are available from long-term studies of the general population comparing cancer risk in women who have harmful BRCA1 or BRCA2 mutations with women who do not have such mutations. Therefore, the percentages given above are estimates that may change as more data become available.”

RSB Show listeners can get the 4-DVD set for free with purchase of one bottle of Oxylift! RSB interviewed Ed on May 7 and also at the Natural Products Association SE Expo last December and you can listen to it by clicking this link: Ed McCabe’s Oxygen and More! Show notes for that appearance are here.

The Illinois Senate has voted to approve the use of marijuana for medical purposes, which if signed into law would make it the second-most-populous state after California to do so

A new virus in the same family as SARS — found for the first time in humans in recent months — has infected 40 people, most of them in the Middle East.

Chlorine is supposed to take care of most of the microbes floating around in pools, but human waste, it seems, is stubbornly resistant to being sanitized.

In the years I’ve spent writing about infectious diseases I can only think of a handful that have made me squirm: Guinea worm disease, which involves painful extractions of long worms from the human body (blech); Naegleria fowleri, the brain-eating amoeba (pretty self-explanatory); Ebola (because, well, it’s Ebola); and Staph A (full name, Staphylococcus aureus).

A review of past research finds that fever-reducing drugs have no effect on the speed of children’s recovery from an infection, contrary to the fears of some doctors and parents. Researchers have debated for decades whether lowering a sick child’s fever helps the recovery process or interferes with the body’s ability to fight the infection. Some previous research has shown that giving children fever-reducing “antipyretic” medications, such as acetaminophen, after vaccinations interfered with their immune responses to the vaccines, for example.

Proponents of fluoridating Portland’s water supply had no trouble getting the local Urban League on board. Here in the biggest city in the country that still doesn’t treat its water to prevent tooth decay, studies show that low-income children …