What’s the truth about the events in Boston? Was it an intelligence operation? Or just two dumb brothers who made everyone feel their pain?

We can’t answer the question by looking at the bombing by itself. We have to dolly back and ask ourselves where we are living.

Where do we find the center?

We’re between the resource that makes modernity possible, and the group or groups of people (like the Project for a New American Century, the makers of 9/11) keeping it flowing through subversion, deception and brute force.

Let’s make it a square.

3. Saudi Arabia teetering on fears of a revolution,

If Saudi Arabia falls, the U.S. military occupies. But how? Can we hold a gun at the heads of two States while borrowing bullets from each of them?

Let’s make it a hexagon.

5. Israel failing to keep its role as ‘our proxy’ in the Middle East because of their Governments murders in Palestine,

6. 9/11 so well understood to have been the uber-Reichstag of modern history by so many intellectuals, scholars, activists, military, ex-military and citizens…

7. A looming monetary crises about to be unfoled because the international/no-nation Federal Reserve has pimped out too many ‘aero’ dollars, meaning that…

8. The entire jigsaw is about to collapse inward.

The Fed has overprinted paper money, causing prices to soar – and we’re just at the beginning of inflation. The American Way of Life, as it’s been sold to us since the mid-1950s, is unraveling, the rug is coming undone beneath our feet; the thread is slipping away as if tied to a boulder hurtling down a cliff – and off into an abyss….

And we’re back to:

9. Peak Oil. Because that’s what makes it all go round. 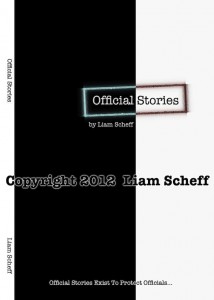 Western energy use will dictate that we continue to manage the downward spiral of modernity, until we’re all habituated to not moving around very much at all. Until we’re all used to staying at home, because it’s the only way to “stay safe.”

The reality? It’s inevitable that our way of life will change over the next 10 years. But the “they” at the top can’t tell us that — if they even understand it themselves. So we’re going to do it the old-fashioned way:

Or, you could… if you really wanted to….pull out of the crumbling building now, and head for greener pastures where you can grow some food and develop a community that will withstand the crashing waves.

Liam Scheff is author of “Official Stories,” because “official stories exist to protect officials.” Available at Amazon.com and on Kindle, MAC and PC. http://www.amazon.com/dp/147756134X