Yesterday, we talked about dietitians, drunk with the power of the state, attacking bloggers who healed from disease and dared to share their nutritional journey! http://www.youtube.com/watch?v=R653E4OXJzc&feature=youtu.be Today, we’ll talk about doctors with no nutritional training that are granted special powers by the state to bypass the arteries that became clogged because naïve patients were mistaken in their assumptions. What assumptions? That licensed and duh-greed medical professionals are actually trained in nutrition for prevention of disease. Also, if you or your child were diagnosed with an eye infection of any kind, would you know how to get over it without resorting to antibiotics or other petrochemical medicines? Hi-ho, silver to the rescue!

And then, the three amigos are back together! Cover your ears and hide the kids! Richard Pearl of Simply Natural and Pearls of Health radio joins the fray with superhero sidekick Liam Scheff and RSB. https://www.facebook.com/profile.php?id=1099517522#!/simplynaturalcafe and http://liamscheff.com/ We’re going to talk about whatever comes up, but we’ll try to hit a few stories: 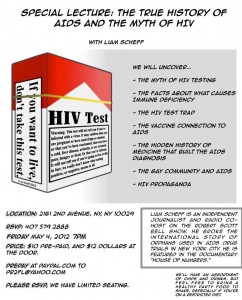 HIV fraud! 911! Oh, yeah – did Shakespeare really write Shakespeare? What about the Treyvon Martin case? We’ll get past the “race war” rhetoric and review the sensational news story in a more rational way than the other media! Enjoy and abundant consciousness – you know we will!

How much nutritional training in prevention do cardiovascular docs actually get? A  smidgen of a speck… http://www.healthnews.com/en/news/Prevention-a-low-priority-in-heart-docs-training/1$iACMwf9ABf8baxiI9eHh/?utm_source=feedburner&utm_medium=feed&utm_campaign=Feed%3A+us%2Fhealthnews+%28HealthNews+Articles%29

Another victim of the Heart Attack Grill? Could it have been the margarita, cigarettes and hormone/antibiotic infested factory-farmed meat? http://www.reuters.com/article/2012/04/24/tagblogsfindlawcom2012-legallyweird-idUS90215278320120424

3 common myths about vaccines disassembled by a vaccine shill. Laughable if it were not so sad. http://www.medicalnewstoday.com/releases/244502.php

Ron Paul wins Washington and is on track to gain the Republican nomination, despite the mainstream media blackout! http://runronpaul.com/election/ron-paul-wins-washington-on-track-to-be-nominated-at-2012-gop-convention/ and http://www.policymic.com/articles/7460/ron-paul-wins-washington-on-track-to-be-nominated-at-2012-gop-convention

Is the “Stand Your Ground” law in Florida more like to Old West? http://southtownstar.suntimes.com/news/crime/11991942-474/mcgrath-stand-your-ground-laws-recall-the-wild-west.html

Are in or near Atlanta this weekend? The Alive Expo is happening April 28 and 29! If you attend, you can meet Jonathan Wagner from http://choosetobehealthy.com/! http://aliveexpo.com/ticket_info.php

Are you in the San Francisco Bay area this weekend? The New Living Expo is happening April 27-29! If you attend, be the first RSB Show listener to visit Stephen Rogers at Shentrition’s booth will earn a bottle of an amazing adaptogenic superfood FREE! http://www.newlivingexpo.com/tickets.html 3 winners/1 per day (Friday, Saturday & Sunday)

Dr. Buttar will be speaking this Saturday, April 28th at the Best Answer for Cancer Foundation’s 10th Annual International IPD/IPTLD Integrative Cancer Care Conference. He will be speaking for the general public at 11:30 AM – Saturday, April 28th at the Hilton Dallas/Southlake Town Square in Southlake, Texas.  For a complete schedule and/or to register, download this PDF file: http://iptforcancer.com/conference/docs/2012-conference-public-agenda.pdf If you are a physician, Dr. Buttar will be speaking to Doctors at 8:00 AM.  If you are a physician, visit: http://www.iptforcancer.com for more information about IPT For Cancer.

Will you be at the Autism One Conference in Chicago May 23-27, 2012? Hope to see you there! http://www.autismone.org/content/2012-autismone-conference

In case you missed my broadcast from Sunday (04/22/12) http://www.robertscottbell.com/?p=6180 on GCN from this past Sunday when RSB hosted a special Earth Day broadcast. David Steinman, editor of the Doctor’s Prescription for Healthy Living, dropped by to update us on his race against Henry Waxman in California’s 33rd District. Did RSB really endorse a Green Party candidate? http://www.steinman2012.com/ You’ll have to download it to find out! Plus, 30 mind-blowing reasons why you should be “happy” to pay your “fair” share! You gotta hear it to believe it! Listen here: http://www.gcnlive.com/programs/robertScottBell/archives.php