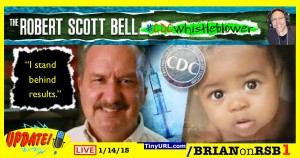 Wednesday on The Robert Scott Bell Show 7-9PM EST: Despite the mainstream media blackout, or maybe because of it, #CDCwhistleblower had achieved 750,000,000 impressions on Twitter! Brian Hooker, PhD, returns with updates on the CDC’s William Thompson’s admitted manipulation of data regarding the increased risk for autism after MMR vaccination, particularly among African American boys. Hooker conducted a re-analysis of data and published the findings this past August stating that there exists a 3.4 times increased risk of autism among those who received the shots prior to 36 months of age, rather than later. There is a blatant cover-up and we shall endeavor to shine more light so that no other children are needlessly harmed. We’ll also discuss the acknowledged link between thimerosal and neurological tics. CDC’s Tom Friedan had a chance to come clean on the issue, but elected to muck up the works with Ebola incompetence and distractions. Will there be Congressional hearings? Then, RSB, Ty Bollinger and 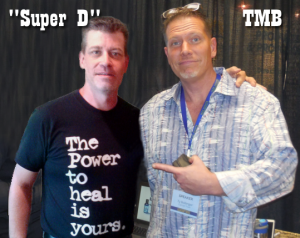 Super Don reveal even more medical kidnappings and talk with the father of a child recovering from cancer who is being threatened with forced chemo even though he is cancer-free.  Call with your questions at 1-866-939-2355. Listen in at www.NaturalNewsRadio.com.

It’s time for Ty Bollinger and Outside the Box Wednesday as TMB and RSB talk about the growing number of medical kidnappings taking place in the land of pharmaceutical liberty. How many children have to be stolen from their families under the guide of medical neglect or abuse before enough is enough? Forced chemo? Mandated vaccinations? The courts and Child Protective Services regularly side with allopathic doctors and the hospitals they represent, even in the face of strong and sincere family objections, or merely the request to seek a second opinion. How did we get here? We’ll talk with the Shoars family about their horrific ordeal after their youngest child died while under the care of a conscientious babysitter. Why has the state taken all seven of their children? Josh Zamora shares his tale of threats of forced chemotherapy on his son Ezra, even though he has tested free of cancer. Finally, how will your children protect themselves from a school intruder? An Alabama middle-school has suggested the use of canned goods. Seriously. Finally, there is more evidence that vaccines cause Sudden Infant Death Syndrome, thanks to the Italian courts mandating the release of hidden evidence from Big Pharma. Have you gotten your Carnivora yet? Special thanks to Better Way Health for making Outside the Box possible! And remember the superfood of superfoods: Zija Moringa. Click here to get some and work with Ty and his team! Get ready for Ty and RSB as they go way Outside the Box! Ty’s websites include www.CancerTruth.net and www.SurvivalHerbs.com. The new book by TMB and RSB is available now! Get ready to Unlock the Power to Heal!

Tabitha and Jeff Shoars – The unthinkable happened to a family in Arizona. Their three-year-old daughter mysteriously collapsed while her parents were away from home, and she died shortly after. As horrible as that tragedy was, Khloe’s death was only the beginning of the devastation to the Shoars family. Child Protective Services immediately came in and took away all seven of their other children, placing them in various foster home settings around the area.

Josh Zamora tells us the following: Our son Ezra was diagnosed with a kidney cancer (clear-cell sarcoma of the kidney) the first week in Nov 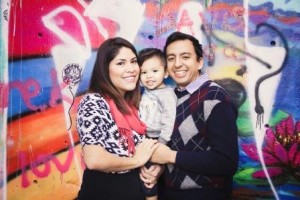 2014. Dell’s Childrens Hospital operated on him and removed the tumor along with the kidney it was surrounding. We then started researching alternatives and what would be effective for him. Dell’s contacted CPS (Child Protective Services) to try and force us to give him treatment claiming that their treatment was the only effective method. He is currently under the supervision of a dr who practices NET. This doctor has found deficiencies in him and he is currently on a regimen of organic foods, supplements, essential oils, kangen water, and is getting treated for all other imbalances. This is to improve his immune system as well as his overall health. CPS determined that we are fit parents who provide for his mental, emotional and physical well-being and that we are not putting our son in any immediate danger. Our son was scanned in Jan 7 and 8, 2015 and all MRI, CT and Bone Scans were clear. The oncologist had to admit that he was cancer free. However, chemo/radiation is still being forced on our son for the possibility that something can come back in 2-3yrs. The only evidence that supports current ‘standard of treatment’ is a study that is inconclusive, as it does not include all methods of treatment or all the people who get the illness. The only people included in these studies are those who qualify and those who present themselves medically. After a conference meeting with an admin, the oncologist and CPS, the member representing CPS asked if this treatment was preventative to which the nurse practitioner agreed that it was but the oncologist disagreed. This then shows that the case for treatment was not proven adequately to the majority present. We currently need help with the following: looking for an oncologist who would tolerate treatments other than chemo/radiation so that we can scan him regularly and those who are well-versed in family law. 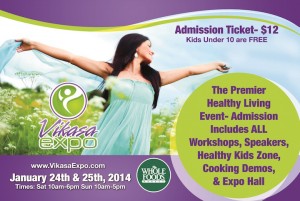 Forcing Chemo on a 17-Year Old Is Deadly, Research Reveals

What keeps RSB and TMB strong through the stress of travel and colder winter months? Beta 1,3D Glucan from Better Way Health! Call them at

Take advantage of this incredible deal on One World Whey! 1-888-328-8840! www.oneworldwhey.com  HAPPY NEW YEAR! We’re celebrating the New Year by giving you 20% off on all One World Whey purchases now through January 12th, 2015. We appreciate your business. Due to an overwhelming response we decided to extend our sale until 1/19/2015. Enjoy 20% off on all One World Whey purchases! Customers like you make doing business a real pleasure! Call to order or buy online and use offer code: nyr20.

Immune modulation from the botanical world? Of course. What do RSB and TMB and family use? Carnivora, of course! Call 1-866-836-8735. Click Here To Receive Our Free Video Newsletter