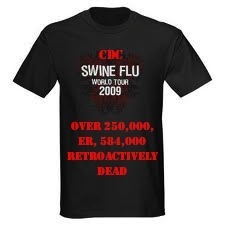 The CDC and WHO are at it again, this time retroactively declaring 250,000 to 584,000 additional deaths to the Swine Flu of 2009. How do they do that? What is the source of their black magic? Investigative reporter Jon Rappoport returns to reveal the bullsnot behind the pharmaceutically conflicted medical veil. www.nomorefakenews.com and  http://www.robertscottbell.com/?p=6705
More creativity from Jon Rappoport:

Leslie Carol Botha joins RSB from the Society for Menstrual Cycle Research to discuss some major female endocrine health discrepancies and medical malfeasance.  In 2006, the HPV vaccine Gardasil touted to prevent cervical cancer was introduced to a public generally unaware of the Human Papillomavirus or its threat to adolescent girls and women. However, the public was quickly informed of the dangers of the virus when Merck launched an aggressive advertising campaign designed to capture the attention of girls/women ages 9 to 26 with a catchy jingle and their now famous line: “One Less Girl to Get Cervical Cancer.” Adolescent girls were dancing and singing that they will be ‘one less girl’ in unison with the award-winning TV commercial. Six years later, it appears that ‘one less’ is now turning into ‘one more’ as reports of abnormal pap smears, cervical dysplasia and cervical cancer are appearing in the HPV vaccine targeted market. http://menstruationresearch.org/2012/06/26/when-one-less-becomes-one-more/

Call us at 1-866-939-BELL (2355) with your questions or comments! We’ll take a call on magnesium stearate – is it dangerous, benign or beneficial? Mercola says dangerous, Chris Barr says the food sourced version is benign and Byron Richards cites studies showing benefit! So which is it? http://www.wellnessresources.com/health/articles/the_facts_on_magnesium_stearate/

It’s National HIV Testing Day! Only the government could lie about a medical test so blatantly that it would gain its own government sanctioned web site. What section of the Constitution authorizes it? http://aids.gov/news-and-events/awareness-days/hiv-testing-day/

Swine Flu in 2009 likely caused 250 quadrillion deaths according to the CDC and WHO. Why do they make such $%!+ up? http://ca.news.yahoo.com/swine-flu-likely-claimed-quarter-million-lives-study-232858163.html

Action Alert! Don’t let Congress do an end around the GMO labeling issue and the courts! http://www.anh-usa.org/dont-let-the-gmo-industry-make-an-end-run-around-the-courts/

It should be National TSA Testing Day, where they would all fail the Constitution! Did they really just dump grandpa’s ashes on the floor and laugh about it? http://www.dailymail.co.uk/news/article-2164989/TSA-agent-opens-jar-mans-ashes-spills-floor-stands-laughs-grandson-scrambles-gather-up.html

Watch the TSA fail at its most basic task: http://www.youtube.com/watch?v=_WN6Gw9yNsY

Why do women have more cervical dysplasia after getting Gardasil? http://menstruationresearch.org/2012/06/26/when-one-less-becomes-one-more/