Why does RSB interview people who do not fully agree with him about vaccines, for example? Why does he not attack them for their views that vaccines still may provide some good? How many people who have once believed in vaccines are now ardent warriors to awaken others of their danger? Would it be better to attack vaccine-sympathists into expanded consciousness? How many times have you been convinced by violence to change your views? It’s one thing to defend yourself from the likes of vaccine-shill Paul Offit, but what about the research scientists and doctors who are very close to coming over to the light side? Where is the real danger? Only government can “legally” use force to medicate, vaccinate or steal your children. Do I exaggerate? Could it become a crime to heal your children from vaccine damage without approval by state and federal authorities? RSB has often claimed that the greatest danger we face is not from a foreign enemy, but as our Founding Fathers warned, from an out-of-control government! Dr. Wakefield has written of (and will reveal) such a real life example that will shock you! 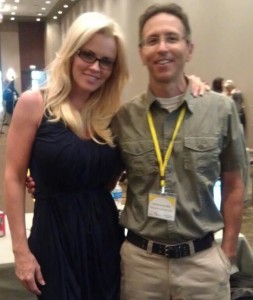 Jenny McCarthyjoins RSB from Autism One Conference to discuss vaccines, autism and her upcoming projects in film and television. She riffs on what was happening when she first discovered that her son, Evan, was vaccine-damaged – how have things have changed. What does she mean by greening vaccines? Why won’t she come out fully against all vaccines? Jenny shares her perspective on who is most at risk. Are there any other celebrities willing to step out and acknowledge vaccine dangers? Why or why not? Jenny feels that it was her destiny to come out and risk her career over this issue so that other children will not have to suffer the way her son did. Were they listening 5 years ago when she first related her story? Why are many doctors still not acknowledging the real risk? What is it about a mother’s intuition/maternal instinct that simply must not be ignored? She’ll also reveal details about her new reality show “Surprise!”  http://generationrescue.org/ and http://www.nbcumv.com/mediavillage/networks/nbcentertainment/surprisewithjennymccarthy

How deep does the GMO corn hole go? Monsanto and other biotechnology firm continue to claim that their products are perfectly safe and even necessary to feed the world – but are they really? Jeffrey Smith returns to reveal more of the science and reports coming from farmers in the field and how GMO feed affects the animals. What about children and animals producing pesticides in their own intestines? How is the gut responding to the foodstuffs of genetically engineered products? Could Round-up Ready crops accelerate nutritional the deficiency syndrome? Manganese levels are dropping. Selenium, too. We’ll talk endocrine disruption, cancer creation and GMO antibiotic effect on the microbiome. Jeffrey is working on a new documentary to reveal the many effects of GMO’s on farmed animals. Will the EPA and FDA finally do their jobs and protect the people? Don’t wait! Share your story with Jeffrey right now: healthy@responsibletechnology.org. http://www.responsibletechnology.org/ and http://www.labelgmos.org/ and http://www.nongmoshoppingguide.com/ and http://www.responsibletechnology.org/autism

reverse the damage with biomedical/natural treatments? That would be great, right? In Arizona, Child Protective Services attacked the family of 5 children who were previously in the autism spectrum BECAUSE they recovered. Dr. Andrew Wakefield relates this outrageous story in his new book “Waging War on the Autistic Child: The Arizona 5 and the Legacy of Baron von Munchausen.” While England descends further into a medical police state, are we that far behind in the U.S.? What is it about America that has Dr. Wakefield hopeful despite modern medicine’s descent into vaccine tyranny? http://www.amazon.com/Waging-War-Autistic-Child-Munchausen/dp/1616086149 and http://callous-disregard.com/ and http://www.drwakefieldjusticefund.org/

Encore! Are you ready to Restore the Republic? FDA Dragonslayer Jonathan Emord returns to reveal the pathway to reduce the size and scope of the federal cancer. Is there a way to salvage Social Security, revamp it or scrap it? What are inalienable rights? How do we get the criminals out of power? Despite many foreign incursions by the U.S., why has Congress abrogated its authority to declare war to the Executive branch? Have they or any president since even read Article 1 Section 8 of the Constitution? http://restoretherepublic.co/ and http://www.emord.com/restoretherepublic.html

Do you like the bumper music played on The RSB Show? Super Don has put our recent selections on a YouTube playlist for those interested: http://www.youtube.com/watch?v=VJrbHapH5pM&feature=autoplay&list=PL088135ED9A6E2E9D&playnext=2

How many more soldiers must we medicate? http://www.naturalnews.com/036001_soldiers_psychiatric_drugs_veterans.html

What might you need to consider about the pending financial collapse of the Western world? http://www.naturalnews.com/035999_financial_collapse_gold_silver.html

In case you missed my broadcast from Sunday (05/27/12) on GCN http://www.robertscottbell.com/?p=6451 from this past Sunday when RSB interviewed Jenny McCarthy about vaccine damage, Brian Hooker on bringing down the CDC with its vaccine lies, Barry Smeltzer on the healing properties of camel milk, and Katheryne Pirtle on the Weston Price perspective on Performance Without Pain, you can listen here: http://www.gcnlive.com/programs/robertScottBell/archives.phpSign up for email alerts here: www.NaturalNews.com/RobertScottBell