Are New York Democrats jealous of California ones? Nanny-state public servants in the Empire State are attempting to pass legislation that would allow kids to consent to Hep B and HPV vaccines! Where are the parents? In NY, as in California, progressive politicians believe that government-medical monopolies know what’s best for the health of your children. When will they wake up? Perhaps when they figure out that U.S. Government Monopoly Medicine has nothing to do with health care and everything to do with disease management… 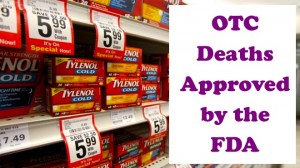 Do you think that if Echinacea or Goldenseal were responsible for even one child death that those herbs would be allowed in your favorite health food store tomorrow? Then why is it that OTC and prescription drugs can kill children indiscriminately at ever-increasing rates and there’s nary a whimper from Dick Durbin and Henry Waxman? How about the identified causes of the autism spectrum? Dick and Henry are strangely silent. Are you ready to stop looking to Washington, D.C. to solve the very same problems they facilitate and then cover for? Instead of approved cough and cold medicines, might you consider homeopathic Antimonium tartaricum, Drosera rotundifolia, Spongia tosta and Bryonia alba? How about some Shentrition and Immune Tree Colostrum?

Dr. John Apsley is back to reveal the secrets of earth’s healing waters! We live, thrive, or decay according to the properties of our body’s water. We are approximately 90% water when we are born in perfect health, and less than 65% when we pass away. Healing waters the world over are known to induce miraculous healing while rehydrating ravaged bodies. Would you like to learn and implement more? The Regenerative Lifestyles workshops teach all attendees the remarkable properties of

healing water — how to transform your diet and liquids to turn on your body’s ability to repair and regenerate. You will complete our workshop with the know-how and ability to transform your health and your life forever. Call 1-704-528-8220 for more information about the upcoming event in San Diego May 25-27, 2012. http://doctorapsley.com/RegenerativeLifestyles.aspx and http://www.eventsbot.com/events/eb703873551

Superhero sidekick Liam Scheff checks in from Washington, D.C. and reveals the pharmaceutical propaganda behind the latest study to claim that Omega-3 essential fats do nothing to help people with Multiple Sclerosis. We call BS on their interferon-laced MS study! Also, we’ll cover options for any neurodegenerative concerns, including various EFA’s, Silver Hydrosol, Silica, Colostrum and more!

Another casualty in the war on FDA approved drugs? Wait. There is no war on those drugs. Government sanctioned, pediatrician prescribed drugs (and the people who approve them) have declared war on children. Casualties? Another 5 year old child loses the battle… http://www.foxnews.com/health/2012/04/16/5-yr-old-overdoses-on-over-counter-medications/?utm_source=feedburner&utm_medium=feed&utm_campaign=Feed%3A+foxnews%2Fhealth+%28Internal+-+Health+-+Text%29

A bit of good news? Injury deaths drop for children. What’s the flip-side? Childhood deaths to FDA approved prescription drugs are up a whopping 91%! Where is hypocrite Sen. Dick Durbin on this? http://news.yahoo.com/injury-deaths-drop-among-us-kids-study-183551141.html

California did it, so why not New York? The Democrat-controlled government there wants to bypass parental consent on Hepatitis B and HPV vaccines… http://www.naturalnews.com/035594_New_York_children_vaccinations.html

In case you missed my broadcast from Sunday (04/15/12) http://www.robertscottbell.com/?p=6128 on GCN from this past Sunday when RSB and Michael Badnarik discussed Tax Slavery Day, rights versus privileges and restoring the Republic. Chris Barr also returned to discuss Antoine Béchamp, the Law of the Terrain, Lymphatic Health, whooping cough, nebulizing silver, grains and more! Listen here: http://www.gcnlive.com/programs/robertScottBell/archives.php