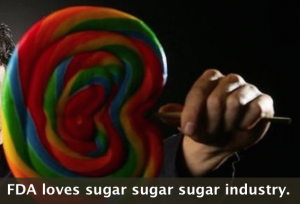 Tuesday on The Robert Scott Bell Show 7-9PM EDT: In the endless war on drugs, the government forgot to mention one that may be more dangerous than all the others: sugar. Yes, the consumption of refined sugar has created more disease, suffering and death than even heroin. Studies show that it is equally addictive and since hundreds of millions more use it on a regular basis, it’s not much of a stretch to declare it more dangerous (which is not an endorsement of illegal narcotics, by the way). Considering its known addictive and disease-causing properties, you would think that the FDA would clamp down on its use in processed food. Last year, the FDA proposed that the nutrition label declare how much added sugar a food contained but refused to establish a DRV, claiming that there was no “sound scientific basis for the establishment of a quantitative intake recommendation [from] which a DRV could be derived. According to the Alliance for Natural Health, “this was correct: to imply that we need any amount of added sugar is false and misleading.” Now there’s a new Super Size Me style documentary called That Sugar Film. It

confirms what RSB has said for years: all calories are not the same. Refined sugar messes up your metabolism, calorie for calorie, compared to any whole food you can eat.

Got diabetes? Steve Cooksey, the Diabetes Warrior, used to, until he began to eat real food. Then he was considered to be a criminal by the NC Board of Dietetics for blogging about his recovery by changing his diet. What was the problem with that? None of the foods were on the approved list by those multinational food companies that fund dietetics in America. Pepsico does not to take too kindly to former-diabetics speaking ill of their products. Steve is back to talk about his 6-year anniversary and the latest threats to the First Amendment regarding the dissemination of nutritional information unapproved by dunderheaded diabetes doctors and dietitians. We’ll help you reduce your blood sugar, naturally. In the mean time, seek out doctors and nutritionists who have no conflicts of interest with Big Food manufacturers.

The vaccine apologists and mandaters (think SB277) are changing tactics again. They admit that they are unsuccessful in convincing you that vaccines really are safe and effective. Whatever will they do if they cannot rely on their religion of science to impress the unscientific heathens? The skepducks are ready to incorporate logical fallacies, like anecdotal stories of moms describing what it was like to have a child go through measles. Remember the cigarette packages with horrific pictures of people with lung cancer? Now they want to show you pictures of really bad measles rashes. Appeal to emotion? Where’s your science? Where’s your compassion for the many children and families harmed by vaccines? Is $3 billion not enough paid out to those families since the inception of the National Vaccine Injury Compensation Program? Medical collectivists

have lost their collective minds on the issue of childhood shots. To what will we appeal? To your common sense and a fully supported and functioning immune system!

Did you hear that the NIDA Director Admits CBD Is Safe Medicine? The Federal restrictions on the many forms of the Cannabis plant are crumbling in real time! Thankfully, we can already access the CBD from the industrial hemp plant in all 50 states! Stuart Tomc, Vice President of Human Nutrition at Cannavest is back with the latest scientifically validated updates on why you should consider integrating CBD into your daily dietary regimen. RSB does everyday!

More breaking news about GMOs? Texas introduces legislation ot mandate GMO labeling! Will it be enough to thwart the anti-federalist DARK Act as it makes its way through the Senate in Washington, DC? What about GMO science? Did you hear that the rock star of GMO food varieties, Golden Rice, has lost one of its primary supporting peer-reviewed scientific papers? It was retracted due to numerous problems, including issues with consent and an unrealistic diet. Take that. Or don’t. Africa is better off without it.

RSB answers a Question of the Day about reversing degenerative disc disease. And finally, why should parents put chickens on their heads?

Question of the Day: Hi RSB! I have a friend that has a degenerated disk due to mild scoliosis, per her doctor. They currently have her taking prednisone to reduce inflammation and recommended spinal injections and of course in the expected allopathic way they mentioned the possible need for a fusion. Is there trace mineral that could improve the disk and homeopathic remedies that you would recommend, such as Arnica montana for pain. Thanks! Michelle

The Sugar Film: One interesting fact that comes out of Gameau’s self-abusing ordeal is that even though he has been eating the same number of daily calories—a normal 2,300—as he did before, he has packed on 15 pounds mostly around his waist. His acquisition of a dad-bod physique might suggest that all calories are not created equal and that certain sources might affect the body more aversely, something sugar manufacturers with a vested interest vehemently deny. ~ Susan Wloszczyna

Why parents should put a toy chicken on their heads