Sunday on The Robert Scott Bell Show 1-3PM EST: We’ll discuss the many non-drug options for ulcerative colitis and other inflammatory conditions of the G.I. tract. What about pain and nerve injury? Are there options other than addictive narcotics? How about microwaving your nerves? I wish I were kidding! Also, Carol Alt may drop by with more amazing healing stories from her show, “A Healthy You!” on FOX News. Are doctors attempting to sell you on off-label methamphetamines for your active child? Are your kids even real? How dod you know if they are not registered with the state? If you sign up for an Obamacare health exchange, is it unreasonable of you to think that they will not erroneously debit your bank account? What’s worse – sugar or fat?  Is exercise as really as good or better than drugs for cardiovascular health? Finally, why are old people exhibiting less fatigue than their younger counterparts? Call 1-866-939-2355 with your questions or comments. Listen in at www.NaturalNewsRadio.com. 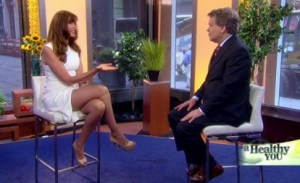 treated her and saved her life. He explained to FOX viewers another treatment for cancer- A scientifically driven 100-year-old pancreatic enzyme therapy, which is based on the research by embryologist Dr. John Beard.  In 1902 Beard proposed that pancreatic digestive enzymes represent the body’s main defense against cancer.  In 1911 Beard wrote a book that “should have changed the course of medicine and cancer treatment, but didn’t”–and said that enzyme therapy would be useful as a treatment for all types of cancer. After Beard’s death in 1926, the research was all but forgotten.  It resurfaced in the 1960s by when Gonzalez met Dr. Kelly at Sloan-Kettering, when he was diagnosed with pancreatic cancer and given 6 to 8 weeks to live—and used the therapy himself. You can watch the interview by clicking this: Alternative Cancer Therapy Through Pancreatic Enzymes

Carol is aback to talk more about her healing journey and how it has become possible to reveal such healing stories on a mainstream news network! She currently serves as host of FOX News Channel’s (FNC) “A Healthy You & Carol Alt” (Saturdays and Sundays 4-4:30PM/ET). Based in New York, she joined the network in 2013.  The weekend show features guest professionals and celebrities as well as Alt’s signature tips for maintaining health and wellness. Additionally, each installment of the show ends with a segment called “Ask Carol” where Alt will answer questions she receives on Facebook and Twitter.  Both a supermodel and lifestyle expert, Alt launched her successful modeling career in 1980 when she was featured on the cover of Harper’s Bazaar and has since appeared on over 700 magazine covers. Early on, she adopted a well-balanced routine to help her stay fit and youthful, which included following the raw food diet plan for more than 20 years.  Alt is the author of several books such as Easy Sexy Raw, The Raw 50 and Eating in the Raw and has shared her tips and experience across all media platforms, including “FOX & Friends,” “Good Morning America” and “The View.” Alt has been featured as a key lecturer at health and nutrition conferences and seminars across the country.

Questions of the Day: 1) Dear Robert, I listen to your show as much as I can I have to download to podcast and listen when I can – love the show. I always learn something new.  I’m an RN trying to learn natural health but between work and home life I am still way behind in reading all of the material I have. The questions I have concern my husband who is 60, works in an underground coal mine (for 40 yrs.) He was dx with ulcerative colitis/crohn’s 4 years ago. The last GI MD says it looks more like UC. and from what I’ve read i don’t think it is Crohn’s. This year he has had 4 flare-ups and one right now. He has been having chronic diarrhea and bloody stool

since Thanksgiving. I have him on Dr. Ohhira’s probiotics (for 4 years), Digestacure, Lopressor, Sovereign Silver, New Chapter multi 50+, George’s Aloe juice/gel, EFA from Youngevity, 6-9/day, lomital, Immodium when out of lomital, intesanew cap., New Chapter zflamend, metamucil fiber caps (2/day), dirreahastop, dirarex herb formula from Himalaya, essential oils from young living and ancient legacy in a diffusor. Finally got him off of sodas and working on alkaline/gluten free diet but, it’s hard as he is so picky. I do have a safe allergy home test kit from Life Extension for food allergies I need to do and send off. I’m at my wits end and I need some help as to what to do next. He doesn’t like alot of veggies so, I’m working on getting him to eat more fruit and veggies. I can get him to drink an occasional green smoothie but, not everyday. I’ve read alot of articles even most on natural news but, I can’t find what do in the flare-ups. What can I do? I do have cinnamon I’m trying to get him to take for the bleeding. He won’t take powders or teas. He will take pills. What remedies can you recommend? He is wheat sensitive I’m sure if it is an allergy as he can tolerate white bread, also lactose intolerant I use almond, coconut, flax milk. No soy. He does pretty well with those. I know he diet is the key but, not sure which one. He was on Asacol until Sept. but, it wasn’t doing any good. The GI MD wants to put him on immune suppressing drugs and i don’t want to decrease the immune system. I want to treat this naturally. Any suggestions?  Thanks,  Luana

2) Robert, My cousin Jim has major back pain. He gets driven 25 miles every day of the week for a morphine shot to help him deal with the pain. He is in his sixties now and his back pain started as a teenager when he was run over by a tractor. His pain has been getting worse the last few years. The doctors last week tried to microwave his neck to deaden his nerves, but so far it hasn’t helped. It makes me think that they are going to start experimenting on him to see what works. I sent him the link to Hempmedspx. Maybe that will help with his pain. His side of the of the family thinks M.D.s walk on water, so they are really not open to anything that their doctor doesn’t spew out. Do you have any suggestions to help him with his pain? Thanks. ~ Norwin

Thursday, December 19: Robert Scott Bell hosts The Robert Scott Bell Radio Show Live at the Vitality Bistro (with a very special guest) from 3 to 5 p.m. followed by RSB’s Talk at 6 p.m. (Health Sovereignty and G. I. Recovery: The Power to Heal is Yours!)