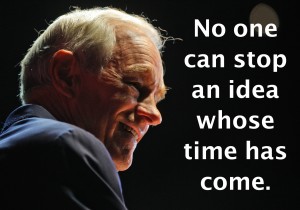 “My personal goal with politics and my personal life is that a free society provides me an opportunity to seek virtue and excellence. And that should be a personal goal. If the government takes over the rule of trying to make you a better person, an excellent person and make you virtuous, it’s all over. That is the seeds of authoritarianism.” – Ron Paul

Authoritarianism? Meet Barack Obama and Mitt Romney. Ben Swann, from an independent FOX News affiliate in Cincinnati, asks Romney about his power grab in the Republican Party to strip duly elected Ron Paul delegates and allow the central party authority to hand-pick future delegates no matter who is selected at the

state level. The Canary Party’s Ginger Taylor reports live from the RNC on the outrage bubbling to the surface and threatening the Romney scripting of this week’s Tampa Republican National Convention. It’s not over ‘till it’s over… For the details on what is happening, go to: http://preservetheparty.com/

There is another case of the State threatening to steal a child from her parents in order to force chemotherapy on her. Yes, Illinois, there is a state sponsored religion and it is called Modern Medicine, Oncology

denomination. We have updates on this upsetting story of Selena Matthews from her father, Jay. The doctor and hospital threatens to take custody if he does not sign permission to give her a CT Scan, despite having one only 3 weeks earlier. From Joni Cox: “In addition to the information I’ve sent you regarding Jay Mathews, he has just contacted me with disturbing news that Oncologist, Paul Kent at Rush in Chicago has now discovered online articles and comments about the family’s fight for 8 year old Selena. Their parental rights fight to get her released from Rush hospital to seek care in NYC from the doctor who most recently performed a surgery on her just 2 weeks ago, is coming to a hostile crossroads. Dr. Paul Kent is threatening Jay, has become very verbally and visibly angry and agitated and REFUSES (even worse now than ever) to release Selena. He has insisted Jay writes a formal letter of retraction regarding their beliefs on chemo and they generally seem scared, as does the hospital.” Here are phone numbers for Rush Hospital: http://www.rush.edu/rumc/page-1144692722632.html

Soldiers are now mind-control subjects. (Have they always been?) But now, beyond the intimidation and breaking of the will that’s de rigeur in basic training is the added poisoning of extensive involuntary vaccination and SSRIs and pharma head drugs dispensed like PEZ candy to soldiers. Can you be brainwashed in a psych ward? Investigative reporter

Jon Rappoport says “yes” and he joins us to describe precisely how – and why the great danger to individual liberty is found in modern psychiatry! Even though Big Government and Big Media are complicit in spreading the goodness of their drug agenda, you can refuse to participate. We’ll share how, why and more! http://www.robertscottbell.com/?p=7488

Then, Liam Scheff chimes in with his personal history; as a teen, Liam was a prisoner of a mountain-top ‘reform’ school, based on the rantings and ravings of Charles E. Dederich, founder of Synanon. Liam talks about the Chinese communist (“Manchurian Candidate”) programing tactics used in these schools, in military training and in all cults (including, to a real degree, our political parties). http://liamscheff.com/surviving-cedu/?page_id=418 & http://www.cafety.org/ & http://astart.fmhi.usf.edu/ & http://www.paulmorantz.com/the_history_of_synanon_and_.html & http://www.rickross.com/groups/synanon.html Synanon, Charles Dederich and the brainwashing of youth for profit. http://en.wikipedia.org/wiki/The_Gulag_Archipelago & http://en.wikipedia.org/wiki/One_Day_in_the_Life_of_Ivan_Denisovich

Listener feedback: “Thanks a bunch for all the advice!!! It was so nice of you guys to respond to me on your radio show. I’m also a huge Ron Paul fan and I make sure to spread the ideas of liberty throughout the school . If you have any time at all, I would like to hear if you have an opinion on the Maharishi School in Fairfield, Iowa. I realize it is good to study on my own but I would just love to find a community of like-minded people to be with. Thanks again for everything you do. You are a truly inspirational person to me!” – Scott Vondy – What other health-focused show has teenage listeners?

Woman outraged by doctor’s refusal to treat her because she weighed too much… http://wtvr.com/2012/08/26/woman-outraged-by-doctors-refusal-to-see-obese-patients/

Portland Oregon plans to poison its citizens with tap water thanks to its delusional mayor McFluoride. http://www.naturalnews.com/036965_Portland_water_fluoridation_toxic_chemicals.html

Politics not as usual? Ron Paul’s “We are the Future Rally” unlike any other political event | Washington Times Communities

RSB will be lecturing at Abby’s Health and Nutrition September 6, 2012 beginning at 7 PM EDT. See you there! http://www.abbyshealthandnutrition.com/retailer/store_templates/shell_id_1.asp?storeID=31P2KHB77SUS9MB3PX56R5G71BFTEKF1