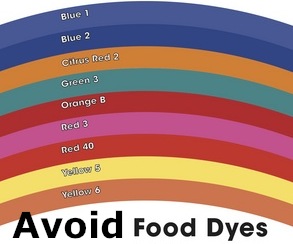 The Robert Scott Bell Show January 17, 2013 Did you miss the broadcast? Click here to listen now.

Eat the colors of the rainbow? Yes, everyday, unless those colors come from a food dye manufacturing plant. RSB has been warning of the dangers of food dyes for years, yet parents continue to allow their children to drink day-glo power-drinks, glow-in-the-dark yogurt, breakfast cereals and other assorted neon candies as if they are organic superfoods. They are actually very dangerous destroyers of cellular metabolism, even in small amounts. RSB explains what the latest scientific findings reveal. What else causes cancer? I mean besides doctors. Miss D.C., former Miss America contestant Allyn Rose has declared that she will have her breasts removed even though she does not have cancer. We’ll explore why she is making this decision with the hopes that no one else followed in her pending surgical footsteps. And if Super Don has his way, we’ll give a weather report from the Bush White House, sort of like a gastrointestinal time machine. You’ll have to tune in to find out what that means…

Doctors and other mental health professionals play an important role in protecting the safety of their patients and the broader community by reporting direct and credible threats of violence to the authorities. But there is public confusion about whether federal law prohibits such reports about threats of violence. The Department of Health and Human Services is issuing a letter to health care providers clarifying that no federal law prohibits these reports in any way.

What happens to doctor-patient confidentiality? While they may be questioning your symptoms to determine what drug to prescribe, will they take notes more akin to an interrogation session? Do you believe it is the role of doctors to spy for an out-of-control federal bureaucracy? Will the feds develop a quota system that doctors must meet each month in order to retain their license? “Dr. Smith, we see that your intake exams have not resulted in any gun confiscations this month. We’ll have to put you on Obamacare’s double-secret probation until further notice. In the mean time, you will not be reimbursed for any patients not fully immunized or on Ritalin.” Will there be a new disease category called the Bill of Rights psychosis for any patient who believes that the government does not have the authority to remove any of the first ten amendments to the Constitution without an act of Congress? 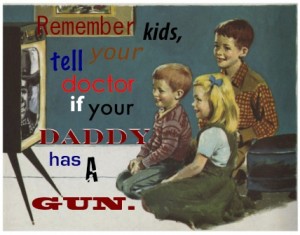 Jon Rappoport is back to discuss the Psychiatric Police State in New York. Patient confidentiality has gone the way of the Dodo bird in the Empire state. Did you know that psychiatrists have been released from all liability for releasing your medical records to the government there? How did this happen? Jon reveals the playbook by which the medical-media-government complex is operating in order to strip you of your rights by prescription. Beware of those with licenses in NY, particularly the shrinks. We’ll also discuss the latest on the Sandy Hook massacre. What do we know? What is still a mystery? Can it get more bizarre? Read Jon’s latest article on how television will be used to disarm your kids and grandkids in the near future.

Question of the day: My Father takes Oxycodone for pain from severe back pain and Fibromyalgia would it be safe for him to try and take Arnica with the Oxycodone it doesn’t give him much relief anymore. Thank You. Marlene — RSB answers: There are no known contraindications for utilizing homeopathic Arnica while on any pain medication.

Food dyes: Are they in you and your children? They are not benign colors of the rainbow. They disrupt cellular respiration and more.

Did we really need more reasons to be cautious around doctors? Obama looking to allopathic physicians for help on gun control!

Check out the full list of Obama’s 23 Executive Orders. Has the emperor spoken?

Spin and bias in late stage cancer drug trials? Say it isn’t so! Sorry, can’t do that; it is.

Not only do they exaggerate the benefit of chemotherapy medication, they’ll give it to you even if you do not have cancer!

White House releases letters from little kids calling for gun control. What about the kids who were killed precisely because there was no one at Sandy Hook Elementary armed and capable of defending them?

Now that psychiatrists are being made the gatekeepers of your rights, should we not also consider the 5 strange similarities shrinks have with prostitutes?

How does the CDC disclaim itself from itself and all of its pharmaceutical lies and propaganda?

Did we really want to know? A gastroenterologist specializing in gastric bypass surgery explains why Al Roker pooped his pants at the White House.