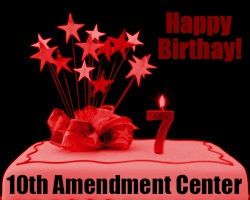 “I don’t think President Obama is here tonight, but I’m sure he’s listening in.” — Mick Jagger, during last evening’s concert by The Rolling Stones. Uh-oh. When rock n’ roll lefties defect from Obama, the establishment is in trouble. That is as it should be. Where is the rule of law? Gone with the whims of G-men who pretend to protect us from boogie-woogies while trampling on our privacy. The Supremes (not the musical group) repealed aspects of the Voting Rights Act today. Does that mean minorities will no longer be able to vote? The bigger question is: Why do you still think that your vote will change anything on the Federal level? The NSA has everyone at that level by the gonads. You want action that actually makes a difference? Learn about the power of no. Nullify unconstitutional edicts that stomp your freedom flat. Happy Birthday to the Tenth Amendment Center!

Should NSA whistleblower Ed Snowden run off to Ecuador? Mike Adams, the Health Ranger, thinks that he ought to think twice before doing so. Why? What AP doesn’t know — and neither do most Americans — is that the U.S. government has a well-established track record of running covert kidnapping and abduction operations in Ecuador to capture anyone they want. How does he know? Mike is the journalist who used to live in Ecuador and who broke the bombshell story of herbalist Greg Caton being kidnapped by U.S. authorities in Ecuador in 2009. He was then stuffed onto a U.S.-bound jet at the airport in Guayaquil and flown to Miami. That full story is published here on Natural News.

Also today, Mike and RSB are going to reveal how transhumanism is a dangerous, irrational death cult shrouded in the language of geeky cybernetics. In fact, the entire idea that you can “upload your mind to a computer” is complete junk science quackery, as you’ll soon hear. In case you’re new to the term, “transhumanism” means uploading your mind to a machine, discarding your body, then achieving immortality by living forever through machines and robots. Google’s director of engineering, Ray Kurzweil, has been pushing this cult for many years, and just recently he promised that by 2045, humanity would achieve what he calls the “singularity,” where our minds can be uploaded to computers. Get ready to plug into (or unplug) one of the most bizarre stories of the year!

Ready for some political healing? Richard Pearl is back to reveal the cognitive dissonance remaining in those who do not speak out against the Obama Administration’s violation of the 4th Amendment. Where is critical thinking? Where is the concern for the outcome for all Americans? We’ll talk transparency, GMO labeling and the many promises that turned out to be less than empty. Why? Is there a way out the corporate structure of control and manipulation of the political world? We’ll even travel back to the War of 1812. Have you watched the news lately? Truth is definitely considered treason in an empire of lies. Did you hear what ABC’s David Gregory said to investigative journalist Glenn Greenwald? Are we really at the tail end of the life cycle of a democracy? What are the 14 points of fascism and how many are already in play here? Stop trusting the man, Richard Pearl is ready to let loose!

Questions of the Day: 1) Hi Robert! I’ve read a few times that we should be taking a break from our supplements from time to time. The protocol I’m thinking of following is taking a week off once a month and supplementing with milk thistle to help clean out my liver. I’m wondering if you know anything about this practice. I’m also wondering which types of supplements would be considered for this practice and which would not, particularly my astaxanthin. I’m concerned it will lose its sun-protection potency. I take several of the standard vitamins and minerals, but I also take chlorella tabs, Orgono Living Silica liquid, and probiotics. I can’t ever remember your covering this subject, so if you have, please direct me to the broadcast date so I can listen. I discovered you on Natural News and have been listening to both your shows via Podcast while I’m cleaning, cooking, and driving. Your show has become a familiar, comforting part of my day and I dearly appreciate you. Thank you so much! ~Tina

2) What is the best possible long term water storage, and or way to ensure water supplies for a long time? For a community. I don’t know of anyone in my community that has thought of this. Thanks a bunch! ~ Kristi

Welcoming new sponsor for health freedom and healing liberty to The RSB Show! Mr. Oxygen 1-800-247-6553 What is my solution for chemtrails? OxySulfur!