Please join me for a special remote broadcast from the Natural Products Association SOHO EXPO in Orlando, Florida.

Stuart Tomc, national educator from Nordic Naturals joins me with more fatty fun! We’ll cover chronic inflammation and reverse it with EFA’s supported by real science. Dr. Scott Minton, PhD, adds to the scientific validation with EPA/DHA pathway revelations. What is it with cellular membranes that rely so crucially upon adequate intake of Omega 3’s? What of the plague of plaque on the brain? We shall discuss memory loss, dementia, Alzheimer’s and brain aging. Finally, how do you know if you are consuming enough EPA and DHA? No, I mean how do you REALLY know? Check out the special offer from Nordic Naturals to save $100 on the RBC Omega 3 blood spot test! Simply go to http://omega3test.com/ and enter the special offer code “NORDIC” to get the deal.

Why did Ron Paul turn down the Trump invitation to the debate? http://www.forbes.com/sites/erikkain/2011/12/03/ron-paul-turns-down-donald-trumps-debate-invitation/

Kevin Boulton, from the Organic Racing Team and Harmony Cone kicks off hour 2 with a serious discussion of the Senate’s attempt to pass a bill (S.1867) that would allow the U.S. military to arrest, detain and imprison Americans indefinitely until the War on Terror is ended. Sen. Rand Paul made it difficult to pass the worst language by quashing a voice vote, but it did not stop the entire bill. We’ll discuss what it all means…

Rand Paul Single Handedly Stops Amendment that Would Have Allowed the Government to Detain American Citizens Indefinitely http://www.economicpolicyjournal.com/2011/12/rand-paul-single-handedly-stops-bill.html and http://www.dailypaul.com/190445/rand-paul-single-handedly-stops-amendment and http://thehill.com/blogs/floor-action/senate/196943-paul-calls-senates-bluff-kills-terrorist-detainee-amendment-

Senator Paul’s statement on the defeat of the detainee amendment: http://paul.senate.gov/?p=press_release&id=399

Doc Harmony returns with an amazing update on Harmony Cone’s lawsuit against the FDA in defense of ear candles! Could this go all the way to the Supreme Court? Also, what is it about Ron Paul that makes him so unique among the so-called defenders of the supplement industry like Hatch and Harkin? The NPA is not going to like what we say, but it must be said.

Finally, we’ll wrap it up with some economic healing. How can micro-economic centers save us from impending economic doom? Tune in to find out! 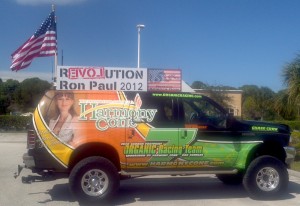