Thursday on The Robert Scott Bell Show 3-5PM EST: Americans, you’ll be happy to know that it’s not just the TSA. Transportation security theater is a global phenomenon. You’ll never believe what happened to Woody’s toy gun at a UK airport! This is the same mindset from which the FDA operates when it prohibits terminally-ill cancer patients from using anything other than chemotherapy, radiation or surgery. Don’t believe me? Ask Sammy Hagar’s drummer’s wife. Why is there a war on integrative medicine? And what about government-sanctioned shots? If vaccines are really mercury-free, why is the government of Chile discussing banning the toxic metal from all vaccines there? The scifientists must be in an uproar, claiming that mercury in vaccines has nothing to do with anything. Stephen Heuer, from SGN Nutrition, returns to talk about the many nutritional benefits of non-denatured whey protein. Did you hear that One World Whey is the 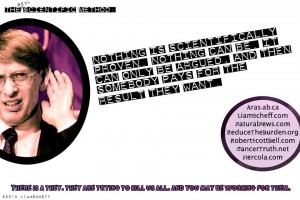 cleanest protein powder tested by the NNFFL? Super Don and the Health Freedom Express report from the Southern Oregon Permaculture Institute with Chuck Burr. Also, Liam Scheff is back with more information on lying scientists. Why do scientists lie? What does Liam really mean by that? Listen in at www.NaturalNewsRadio.com.

Restoration Seeds was founded in 2008 by Chuck Burr as a family farm and home of the Southern Oregon Permaculture Institute (SOPI). Our mission is to preserve open pollinated genetic diversity and offer sustainable agricultural education. Pictured Restoration Seeds staff with Permaculture Design Certificate (PDC) students. Seed grown by Restoration Seeds has been Certified Organic by Oregon Tilth for three years. However in 2013, the U.S. Congress eliminated the USDA Organic Cost Share program for Oregon and other states that reimbursed farmers for organic certification fees. 700 farms in Oregon alone relied on this

program. We have chosen not to re-certify for 2013 because the cost of certification is prohibitive. However, we continue to strictly follow the USDA National Organic Program guidelines. Seed grown at Restoration Farm starting in 2013 will no longer be labeled as certified organic but now just Organically Grown or Safe Seed Pledge. Seed from other farmers and suppliers will be labeled as they are certified.

Question of the Day: I was wondering if you could recommend a brand of coffee? ~ Stephanie