Wednesday on The Robert Scott Bell Show 7-9PM EDT: Say what you will about Donald Trump running for the presidency, he sure is shaking the status quo up a bit. Whether you ultimately decide to vote for him, or vote at all, it is a least a little bit refreshing to see the establishment taken aback by someone who does not play by their rules. Remember, Official Stories are there to protect the officials and the Donald does not appear to be timid in calling out politicians and the media on its inadequacies. But what may be most upsetting to the mainstream elite controllers is his view on vaccinations. Yes, he says that he is pro-vaccine, but the fact that he knows and acknowledges that children are being harmed by the excessive shot schedule is causing some liberal reporters to go apoplectic. We’ll talk some more about he link between vaccines, autism and even

mental health. Do guns kill people or do imbalanced patients on FDA approved medications under the care of licensed medical doctors do the dirty work?

Got kids? The more you have the more you should be afraid of germs! At least that is what germ theory aficionados of the medical mafia want you to be. Be afraid? Not if you understand and abide by the Law of the Terrain. It seems that doctors at the University of Utah School of Medicine are blissfully unaware of Antoine Bechamp. We’ll school them.

When is a dietary supplement not a dietary supplement? When the FDA compliance guide is in conflict with itself. A ten-year-old document is causing conflicts within the regulatory and legal framework governing what you must say on a bottle of milk thistle or selenium. Can a Federal

It’s time for Ty Bollinger and Outside the Box Wednesday as TMB and RSB talk about the CVS drugstore chain overcharging for drugs that people did not even need to begin with! They jacked up the prices for people paying with insurance while the cash customers got a deal! Maybe having medical insurance is the bad deal? Remember those cops busted for trashing a medical marijuana dispensary and eating all the pot brownies? They say that the video that captured their high misdemeanors violated their right to privacy. That’s precious! Just put ‘em in the pokey with all the Doritos they can eat and leave us all alone! We’ve got a serious Question of the Day to answer from someone concerned about his father with brain cancer. Is there a way to integrate natural therapies with surgery and a gamma knife procedure? We’ll reveal some options. Finally, how do you celebrate  your great grandma’s 101st birthday? Would you believe that it involves a tank? Speaking of which, a grateful son made his war hero dad a wheelchair built like a tank. Cool! Have you gotten your Carnivora yet? Special thanks to Better Way Health for making Outside the Box possible! And remember the superfood of superfoods: Zija Moringa. Click here to get some and work with Ty and his team! Get ready for Ty and RSB as they go way Outside the Box! Ty’s websites include www.CancerTruth.net and www.SurvivalHerbs.com. The new book by TMB and RSB is available now! Get ready to Unlock the Power to Heal!

Finally, if you are a wise sheriff, how do you catch drug dealers? Post notices that you will help them eliminate the competition! Seriously.

Question of the Day: My name is Jesus R. and I am writing to you in desperation for any help I can get for my father. My dad was diagnosed with stage IV prostate Cancer and recently the Cancer spread to his brain. At first the doctors told us to get our affairs in order because due to the size of the tumor and his age there was nothing they could do. Hearing the news of my father’s prognosis was devastating, it doesn’t matter if he’s 84 and I’m 43 and I’ve had all these years with him; it doesn’t make losing him any easier and I might as well be 10 years old. I’ll always need my dad and be his little boy. Our family lost our mother to Cancer over 24 years ago and we’re not quite ready to say goodbye to our dad yet not that we ever will be.

Just as we were doing our best as a family to cope with the tragic news a neurosurgeon came along and said he thought my father despite his age was a good candidate for brain surgery and that he could possibly remove all of the tumor. I didn’t know if I could trust that because I’m always skeptical when it comes to conventional medicine but after speaking with my dad and weighing the pros and cons with him he chose to do the operation. I can admit that I was ready to let my dad go, to end his suffering and ours. The man I saw in that hospital bed was a shadow of the man I knew as my father. I wasn’t sure my dad would make it out of the surgery alive and even if he did what if there were complications? What if my dad ended up in a vegetative state? Would he really want that for himself and us? He told me awhile back ago he would not want to live that way, he would hate to be a burden. I don’t see him as that and never have, it’s a blessing to be there for him and to take care of him as he did all of us (children and grandchildren alike) but he wouldn’t see it that way. Even if there were no complications whatever motor skills he lost he would not recover (at least that’s what we were told), they said some improvement perhaps but not much. They also said we would only be extending his life for a couple of more months and would it be fair put him through that for just quantity of life versus quality of it.

We were encouraged I would say to move him back home under hospice care. My dad had other plans, he opted for the surgery. The day of the 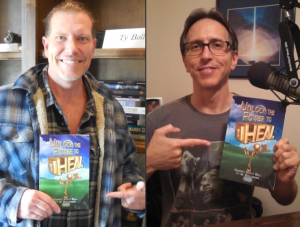 surgery was one of the most nerve racking of my life but I’m happy to say he came out of it without any complications. He has also retained most of the motor skills he lost. He’s currently in rehabilitation and doing remarkably well. He’s eating by himself, standing up, and even walking. I’m glad my dad made the choice to fight because I don’t know that I would have made that choice for him. In fact I blame myself for him being in this position to begin with. Had I not waited so long to take him to the hospital we would have caught this in time and none of this would have happened. Perhaps if I had chosen a combination of conventional and alternative medicine he wouldn’t be in this mess? I don’t know all I do know is that I am racked with guilt.

Having the conversation with my father about his Cancer and how it has spread and about the timeline for his life was the hardest talk I’ve ever had to have in my life. This up and down my family has been through has taken a toll on all of us. I want off this roller coaster as soon as possible. No one ever told me hope can be frightening, my heart can’t handle any more hope. We get good news then bad news then good news again and I’m just waiting while my life is on pause to hear the bad news. It’s been tremendously difficult indeed. I am writing to you because if there’s one thing my dad has taught me through this experience it’s that if there is still life in us to live then we’re gonna live it and we’re not going into the night gently but in a drag out fight.

I need some guidance. We were advised to do a procedure to remove what’s left of the tumor (through the operation they removed 95% of it) known as gamma knife radiation. The surgeon said these tumors start to return in about three weeks. The radiation is scheduled for next week. We are planning to get my father on the Gerson diet and to detoxify his body using as many holistic protocols as possible. We are thinking that maybe we can still fight it or at least we’re gonna give it a try. His Cancer started in the prostate and spread to his bones, they believe it’s by his eye sockets and that’s where the tumor in the brain came from. If there is any advice you can offer on how we can fight this thing it would be greatly

appreciated. You don’t know what this would mean to us. ~ Sincerely, A loving son, Jesus F. R.

Trump Flies Off About Vaccines And Autism: ‘Tiny Children Are Not Horses!’

What’s behind the ‘anti-vax’ movement?