The Robert Scott Bell Show February 13, 2013 Did you miss the show? Click here to listen to the mp3.

I have often related the fact that ADHD is not evidence of a Ritalin deficiency disease. Could it be that the government finally agrees with The RSB Show? While they admit that the chemical kissing cousin of PCP/Angel Dust (PMP/Ritalin) does not really work and that there is no chemical test to confirm a diagnosis of ADHD, what do they propose as a solution? It’s absolutely incredible and RSB will reveal it today on the united States and world of health talk radio! He may also reveal what really works, even though the FDA might not approve. Listen at your own risk!

It’s time for some more Health Freedom Expo preview! This is one of the premiere events during the calendar year for those who love liberty and health, as does Dr. Robert O. Young, who drops by The RSB Show for the first time! Dr. Young has ways of describing the digestive processes of the body that you may never have heard based on a new biology. Does the stomach produce

hydrochloric acid or is it a byproduct of bicarbonate release during the food liquefaction process along the alimentary canal? His book “The pH Miracle for Diabetes” contains some shocking revelations related to the growth of Type I Diabetes in children, specifically. How do we get the bad stuff out of the body? Urination, Perspiration, Defecation and Respiration. The acid-alkaline balance is on tap today like never before! What does your gut tell you? What does the science reveal? Are they in conflict? Major revelations surrounding constipation in kids will be discussed as Dr. Young chooses to educate, rather than medicate! See you at the Health Freedom Expo!

It’s time for Outside the Box Wednesday with Ty Bollinger! If your child died after receive a vaccine, would you look to the government to determine how to react? Government audacity reaches new levels today as they tell parents not to be alarmed by such tragedies. Really. Another government study reveals that parents are OK with HPV shots for boys. Who are these parents? The cultural disparities in trust for the government-medical complex may shock you, but we’ll dare to reveal it! Should we not at least seriously consider homeschooling all children? A german family wants to do just that and they are seeking asylum in the U.S., but the Obama Administration’s Eric Holder is fighting it. Are you surprised? Would you like some chicken with your 12-piece antibiotic value bucket? That is the question in China nowadays. Conquering communism may be as simple as introducing fast food there. We were not going to get the flu

shot. Really, we weren’t, but now that they have genetically engineered insect viruses in them, we can’t wait to roll up our sleeves! Not. Where hath common sense gone? Maybe it went away with the heavy metals that the government sprayed on unsuspecting inhabitants of St. Louis. Finally, a Moment of Duh that helps us recognize that diet plays a role in stroke creation or stroke prevention. Or is it just another NY media attempt at denigrating Southerners? Did the FDA approve police Tasers as a new treatment for epilepsy? Listen to Ty and RSB go Outside the Box each Wednesday to find out! Remember to plug into “58 Holistic Health Nuggets For A Healthy Family”, too. Ty’s websites include www.CancerTruth.net and www.SurvivalHerbs.com. Would you like to “Work With your Doctor” – Ty’s new book with Dr. Michael Farley at http://medicaldreamteam.com/ is on sale! Special thanks to Better Way Health and their Beta 1,3D Glucan for making this possible!

Government admits that ADHD drugs do not work! 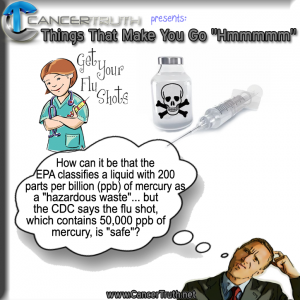 Southern Diet Might Explain the ‘Stroke Belt’ – moment of duh