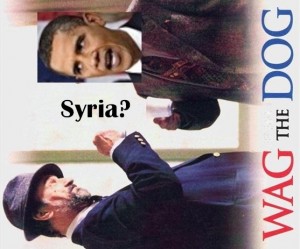 Who is wagging the dog now? Does anybody remember when the U.S. government claimed that Saddam’s Iraq had WMDs? Now it is Assad’s Syria that has exploded chemical munitions? In order to believe the claims in the mainstream media, you must also believe that Assad wants the global community to rally behind forces that want to overthrow Syria and oust him. How better to do that than to commit war crimes on the evening news! In America, the only thing less popular than Congress right now is the thought of going to war against the Syrian government. Yet, the Obama Administration is rattling sabers of impending missile strikes without a declaration of war. Are you sure that Bush is not still the president? We’ll discuss this potential kinetic military action by the Nobel Peace Prize winning shrubbery-like Commander-in-Chief. Peace? Just a little piece of Syrian oil is all we need… Loads of breaking news coming up on The RSB Show today, including new flu shot mandates for the fall. Call 1-866-939-2355 from 3-5PM EDT.

What of radiational challenges? (NaturalNews) After a 29-month cover-up, the Tokyo Electric Power Co (Tepco) is now calling for international help and has all but admitted Fukushima’s radiation leaks are spiraling out of control. In addition to the leaking water storage units that are unleashing hundreds of tons of radioactive water each day, Tepco now says 50% of its contaminated water filtration capability has been taken offline due to corrosion. The result is that radiation leaks are escalating out of control and attempted remediation efforts are faltering. This is in addition to the fact the Japanese government’s attempted brainwashing propaganda campaign has also been exposed. It attempted to convince people that if they drank beer or smiled, they would be immune to radiation poisoning. (Yes, this is how desperate they’ve become…) Continuing coverage of the Fukushima freefall, what it means and how you can keep your kids healthy despite increasing radiation levels. 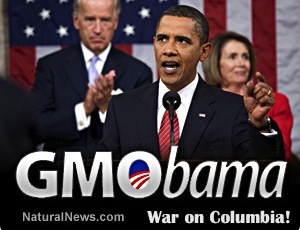 What is free trade? A real definition would include the non-coerced agreement between two or more parties to engage in economic exchange free of government-imposed encumbrances. The Orwellian definition imposed by globalist free traders (WTO) is managed trade to the detriment of the local populace and to the benefit of multinational corporations with no allegiance to any nation or state. Phil Pepin joins RSB to discuss the undeclared war on Columbia by the Obama Administration and Monsanto. (NaturalNews) It’s not an exaggeration to say that Colombia might be on the verge of Revolution. There is a virtual blackout of coverage by the American mainstream media concerning the national protest under way in Colombia. What little coverage I’ve found is biased towards the Colombian Government’s version of events. The media’s focus is not on the cause of the protest but rather the Colombian Government’s accusation that radical Communist groups are infiltrating the protest. The planned protest that started August 19th led primarily by farmers and truckers, has grown to include other groups in opposition to Government policy. Phil Pepin is the host of Pursuit Of Freedom on Natural News Radio Wednesdays 12pm EST.

You can help get the Robert Scott Bell Show carried in your local talk stations! Just call the station and request they carry the show. Ask them to contact GCN by calling 877-996-4327 ext. 123 and asking for “John” who manages the affiliate broadcast relationships. John can get any local AM or FM radio station connected with the global feed so that they can carry the show.

How can you make you dietary supplements 50 times more efficient? You can learn more about Asea and redox signaling molecules at www.rdxnatural.com, or call 800-284-8045 for more information. There is a risk free 30 day money back guarantee with Asea.

Oxygenate and mineralize for health freedom and healing liberty! Mr. Oxygen 1-305-933-4219 RSB Show listeners can get the 4-DVD set for free with purchase of one bottle of Oxylift! Plus 20% off all products! What is my solution for chemtrails? OxySulfur!