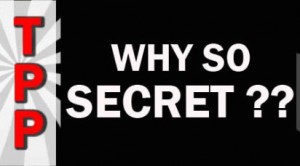 “In acting, sincerity is everything. If you can fake that, you’ve got it made.” — George Burns

In a previous article, I asked: on what legal basis must US (and other nations’) legislators obey a code of silence about the Trans-Pacific Partnership treaty?

They can only read partial drafts and summaries of the trade pact, and then they can’t tell anyone what they’ve read.

It’s a version of “pass the bill and then you can read it and find out what’s in it.”

No problem, except a significant chunk of 12 nations’ futures are riding on the details of this treaty, which, from the leaks we’ve seen, is a boon for mega-corporations and a nightmare for populations.

In the US, Senators, who must vote for the treaty in order for it to pass, go into sealed rooms and look at text—excerpts from drafts, summations—and then emerge, knowing they can be arrested if they open their mouths to anyone.

A source close to the treaty negotiations has given me the legal basis for this law of omertà:

What? That old justification?

Yes. The relevant laws and regulations are long-standing. They are enforced by the Department of Justice. Various levels of classified data are set by agencies within the Executive Branch.

I asked this source (he has read TPP draft-sections and summaries) what the punishment would be for revealing what he knows.

Applying “Secret,” “Top Secret,” or other classifications to a treaty that must be voted on, in order to become law, is a unique situation.

It’s one thing to say a federal scientist can’t publicly publish details on how to build an H-bomb. It’s quite another thing to say US Senators can’t reveal, to the American people, what they’re voting on.

There is no Constitutional basis for such an assertion. In fact, it’s a direct violation of the Separation-of-Powers principle.

By assigning National Security secrecy-status to the details of the TPP, the Executive Branch is arbitrarily muzzling the Congress.

Knowing they’ll be arrested, Senators should be spilling details of the TPP to anyone who’ll listen. They should be intentionally creating a Constitutional crisis.

They should be blowing the whistle on the covert attempt to put all Americans under the gun of a secret treaty.

Oh, but wait. That would be a Senate with conscience, and with balls. Not this menagerie of sold-out puppets and twits and party hacks and drunks and shysters and blackmail bait.

That would be a Senate out of some old Hollywood movie, which as a body suddenly rises up in a moment of great decision.

Obama has the chutzpah to tell dissenting members of Congress their criticisms of the TPP “aren’t specific.” He’s baiting them and tickling them, because he knows they’re not allowed to be specific about what they know.

Is there even one Senator who will accept the dare, who’ll step forward, in front of cameras, and recite everything he knows about what’s in the TPP?

If the FBI arrests him, that would set the stage for a fantastic courtroom scene.

We could use a good Constitutional crisis.

It could create a sudden acceleration of fizz in the rotting decaying swamp of Washington DC. It could loosen a few tongues, and a few more choice stench-ridden secrets could come spilling out.

But oh, there I go again, talking about a fictional Senate, one that would require men and women, not ruined shells.

Not hideous caricatures, pretending to be honorable by obsequiously obeying “see something, say nothing.”