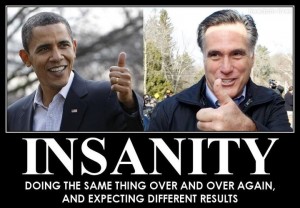 That reporter would be me.  My reply, for starters, is a video cartoon.  Watch it here:

I’m tired of celebrities who don’t have a clue, who think this election is really about the differences between Obama and Romney.

This election is about the pretense of differences.  As any awake American knows, we have one political party in this country.  It has two heads.  Its heads are corporate.  Its heads are Globalist.

Globalism has never been a campaign issue in any presidential election.  That should be a clue, since what is happening in this world is, to a large degree, guided by Globalist forces.

Their goal is a New World Order.  Not the narrow one Democrats think the Republicans fomented.  The N.W.O. embraces both parties.  Whenever there is a piece of legislation before Congress that would expand mega-corporate power at the expense of everybody else, such as the GATT, NAFTA, and CAFTA treaties, requiring Senate approval, both sides of the aisle manage to engineer enough cooperation to pass it.

It doesn’t matter who is president.

Globalist banking forces have been busy bees in the last few years, torpedoing national economies, shoving populations over the cliff, preparing to install some version of a new currency that will encompass the planet.  This currency doesn’t have to be paper, nor does it have to win formal approval of governments. In its first phase, it can simply rearrange debt.

Wait, the US and European bailouts have already been doing that.  And now we have QE3 in America, which is a label for the endless “printing” of Bernanke dollars out of thin air.

Celebrities who think they have a grip on the real role of political parties in this country are absolutely clueless.  In Mr. Jackson’s case, the fact that Barack Obama is black is about as important as a fragment of dust on Mars.

Obama and Romney are tools.  Instruments.  They front for forces over which they have no control.

When people like Matt Damon, Madonna, Brad Pitt, Ben Affleck, and Clint Eastwood make public pronouncements about their favorite politician of the moment, they’re doing nothing more than contributing to the confusion and deception in which American politics has been mired for generations.

They have the right to say anything they want to.  But imagining they have the slightest clue about what is going on is laughable.

Wake the f**k up, America, in their mouths really means: go back to sleep for four more years.  It means: be a sheep.  It means: take your news from the mainstream media.  It means: fall into the trap of believing one of two puppets will cure what ails us.

Are these issues, just to name a few, too hot to handle?  Would coming out of the closet on these matters put a quick end to their careers?  And if so, what, yes, global forces could cast those actors aside like so much debris in the wind?

Living inside the Hollywood bubble can be a precarious proposition, when the truth is on the table.  That’s when these actors, who play fictional heroes, starting sweating for real, back up a step, and sense their fame and fortune is at stake.  And then they feign ignorance and shut up.  They disappear.

If you’re reading this article and are a committed Democrat or Republican, all I can say to you is: Wake the F**ck up.

Only I mean it.