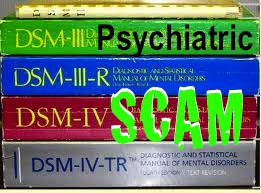 The medical cartel, one of a handful of evolving super-cartels that strive for more power every day, is rife with so much fraud it’s astounding.  In the psychiatric arena, for example, an open secret has been bleeding out into public consciousness for the past ten years.

THERE ARE NO DEFINITIVE LABORATORY TESTS FOR ANY SO-CALLED MENTAL DISORDER.

And along with that:

ALL SO-CALLED MENTAL DISORDERS ARE CONCOCTED, NAMED, LABELED, DESCRIBED, AND CATEGORIZED by a committee of psychiatrists, from menus of human behaviors.

Their findings are published in periodically updated editions of The Diagnostic and Statistical Manual of Mental Disorders (DSM), printed by the American Psychiatric Association.

For years, even psychiatrists have been blowing the whistle on this hazy crazy process of “research.”

Of course, pharmaceutical companies, who manufacture highly toxic drugs to treat every one of these “disorders,” are leading the charge to invent more and more mental-health categories, so they can sell more drugs and make more money.

But we have a mind-boggling twist.  Under the radar, one of the great psychiatric stars, who has been out in front inventing mental disorders, went public.  He blew the whistle on himself and his colleagues.  And for 2 years, almost no one noticed.

His name is Dr. Allen Frances, and he made VERY interesting statements to Gary Greenberg, author of a Wired article: “Inside the Battle to Define Mental Illness.”  (Dec.27, 2010).

Major media never picked up on the interview in any serious way.  It never became a scandal.

Dr. Allen Frances is the man who, in 1994, headed up the project to write the latest edition of the psychiatric bible, the DSM-IV.  This tome defines and labels and describes every official mental disorder.  The DSM-IV eventually listed 297 of them.

In an April 19, 1994, New York Times piece, “Scientist At Work,” Daniel Goleman called Frances “Perhaps the most powerful psychiatrist in America at the moment…”

Well, sure.  If you’re sculpting the entire canon of diagnosable mental disorders for your colleagues, for insurers, for the government, for Pharma (who will sell the drugs matched up to the  297 DSM-IV diagnoses), you’re right up there in the pantheon.

Long after the DSM-IV had been put into print, Dr. Frances talked to Wired’s Greenberg and said the following:

“There is no definition of a mental disorder.  It’s bullshit.  I mean, you just can’t define it.”

That’s on the order of the designer of the Hindenburg, looking at the burned rubble on the ground, remarking, “Well, I knew there would be a problem.”

After a suitable pause, Dr. Frances remarked to Greenberg, “These concepts [of distinct mental disorders] are virtually impossible to define precisely with bright lines at the borders.”

Frances might have been referring to the fact that his baby, the DSM-IV, had rearranged earlier definitions of ADHD and Bipolar to permit many MORE diagnoses, leading to a vast acceleration of drug-dosing with highly powerful and toxic compounds.

Finally, at the end of the Wired interview, Frances flew off into a bizarre fantasy:

“Diagnosis [as spelled out in the DSM-IV] is part of the magic…you know those medieval maps?  In the places where they didn’t know what was going on, they wrote ‘Dragons live here’…we have a dragon’s world here.  But you wouldn’t want to be without the map.

Translation: People need to hope for the healing of their troubles; so even if we psychiatrists are shooting blanks and pretending to know one kind of mental disorder from another, even if we’re inventing these mental-disorder definitions based on no biological or chemical diagnostic tests—it’s a good thing, because people will then believe there is hope for them; they’ll believe it because we place a name on their problems…

If this is medical science, a duck is a rocket ship.

If I were an editor at one of the big national newspapers, and one of my reporters walked in and told me, “The most powerful psychiatrist in America just said the DSM is sheer b.s. but it’s still important,” I think I’d make room on the front page.

If the reporter then added, “This shrink was in charge of creating the DSM-IV,” I’d clear more room above the fold.

If the reporter went on to explain that the whole profession of psychiatry would collapse overnight if the DSM was discredited, I’d call for a special section of the paper to be printed.

I’d tell the reporter to get ready to pound on this story day after day for months.  I’d tell him to track down all the implications of Dr. Frances’ statements.

I’d open a bottle of champagne to toast the soon-to-be-soaring sales of my newspaper.

And then, of course, the next day I’d be fired.

Because there are powerful multi-billion-dollar interests at stake, and  those people don’t like their deepest secrets exposed in the press.

And as I walked out of my job, I’d see a bevy of blank-eyed pharmaceutical executives marching into the office of the paper’s publisher, ready to read the riot act to him.

Keep in mind that Dr. Frances’ work on the DSM IV allowed for MORE toxic drugs to be prescribed, because the definition of Bipolar was expanded to include more people.

Adverse effects of Valproate (given for a Bipolar diagnosis) include:

life-threatening inflammation of the pancreas;

Adverse effects of Lithium (also given for a Bipolar diagnosis) include:

Adverse effects of Risperdal (given for “Bipolar” and “irritability stemming from autism”) include:

restless muscles in neck or face, tremors (may be indicative of motor brain damage).

Dr. Frances self-admitted label-juggling act also permitted the definition of ADHD to expand, thereby opening the door for greater and greater use of Ritalin (and other similar compounds) as the treatment of choice.

So what about Ritalin?

In 1986, The International Journal of the Addictions published a most important literature review by Richard Scarnati. It was called “An Outline of Hazardous Side Effects of Ritalin (Methylphenidate)” [v.21(7), pp. 837-841].

A recent survey revealed that a high percentage of children diagnosed with bipolar had first received a diagnosis of ADHD.  This is informative, because Ritalin and other speed-type drugs are given to kids who are slapped with the ADHD label.  Speed, sooner or later, produces a crash.  This is easy to call “clinical depression.”  Then comes Prozac, Paxil, Zoloft.  These drugs can produce temporary highs, followed by more crashes.  The psychiatrist notices the up and down pattern—and then comes the diagnosis of Bipolar (manic-depression) and other drugs, including Valproate and Lithium.

In the US alone, there are at least 300,000 cases of motor brain damage incurred by people who have been prescribed so-called anti-psychotic drugs (aka “major tranquilizers”).  Risperdal (mentioned above as a drug given to people diagnosed with Bipolar) is one of those major tranquilizers.  (source: Toxic Psychiatry, Dr. Peter Breggin, St. Martin’s Press, 1991)

This psychiatric drug plague is accelerating across the land.

Where are the mainstream reporters and editors and newspapers and TV anchors who should be breaking this story and mercilessly hammering on it week after week?  They are in harness.

And Dr. Frances is somehow let off the hook.  He’s admitted in print that the whole basis of his profession is throwing darts at labels on a wall, and implies the “effort” is rather heroic—when, in fact, the effort leads to more and more poisonous drugs being dispensed to adults and children, to say nothing of the effect of being diagnosed with “a mental disorder.”  I’m not talking about “the mental-disease stigma,” the removal of which is one of Hillary Clinton’s missions in life. No, I’m talking about MOVING A HUMAN INTO THE SYSTEM, the medical apparatus, where the essence of the game is trapping that person to harvest his money, his time, his energy, and of course his health—as one new diagnosis follows on another, and one new toxic treatment after another is undertaken, from cradle to grave.  The result is a severely debilitated human being (if he survives), whose major claim to fame is his list of diseases and disorders, which he learns to wear like badges of honor.