for the Robert Scott Bell Show and Natural News Radio 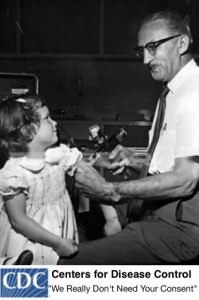 On Tuesday’s Robert Scott Bell Show (10-10-11) April Boden, vaccine activist, blogger and mother of a vaccine-damaged six-year-old in California, reveals her deeply insightful take on the politics of the two – count them, two – vaccine bills, that were just passed by Governor Jerry “Drug-Fever” Brown.

According to April (http://aydansrecovery.blogspot.com), “The whole thing was entirely calculated. On one hand you have bill AB499 which allows a minor to consent to vaccines without parental knowledge, on the other you have SB946 which is about autism insurance reform.”

These two bills were put to Governor Brown for approval on the same day, a crass calculation says April, as they pit one and the same group of activists – those concerned or mortified by vaccine damages – against each other. The first bill, AB499, allows students in public schools – and minors all over the pharma-crazed State of California – to be given drugs for any presumed sexually transmitted disease, including the Gardasil vaccine injection.

But is HPV truly an STD? It occurs in some 80 percent of the human population. It is a harmless wart virus that does not – I repeat – does not “cause cervical cancer,” despite what the pharma propaganda machine tells the sleep-walking public. According to even the mainstream’s statistics, close to 99 percent of women who ever have the ‘virus,’ never get the disease! How’s that for ‘proof of causation?’

The reality is this: HPV is an entirely common nothing of a virus, which like most “viruses” is expressed under cellular stress, and which is suppressed or made completely inactive in a healthy, well-regulated cell.

Cells which are nurtured and fed essential nutrients, like essential fatty acids, selenium and glutathione regularly stop the expression of “viruses.” Cells which are dysregulated, starved for nutrients and intoxicated by chemicals, pesticides, heavy metals and neurotoxins often express viruses. We encourage viral expression in bodies which are starved and abused. And let’s stop to note that the very chemicals and agents which damage cells are precisely those which constitute vaccines!

But the once “hippy” Governor isn’t interested in nutrition, or cellular health, or even that long-forgotten concept of “choice” that Liberals claim to care for with such passion. No, he wants children to be able to “opt in” to eugenic ‘science’ programs that would make Goebbels blush with pride. Now ten-year-olds can be propagandized at school with the anxiety-provoking lie that they have to be afraid of getting genital cancer from something that almost everybody in the world has at one time or another.

And now they can ask for – and receive – the dangerous Gardasil or Cervarix vaccine. And ‘dangerous’ is not hyperbole. This injection has already killed close to a seventy girls, young women and some boys, whose parents trusted the State-pharma complex.

The second bill, SB946, is supposed to help parents with vaccine-damaged (‘autistic’) children pay for medical care, rehabilitative education and special needs. But April, in reading the fine print, found that the bill is like the electronics you buy at Best Buy on a whim – it is obsolete before you get it out of the store. The bill expires in two years, at which point cash-strapped parents will have to muster more free time to fight the state again.

April writes: “[The bill] only pertains to private pay insurance; State-paid insurance will be exempt.”

In other words, those who can afford to pay for insurance are getting a hand. Those too poor to purchase exorbitant insurance, are stuck with a broken and decrepit State system.

And April notes, “It does not prevent insurance companies from raising rates as a result. In the meantime California is reducing its State funded programs for autism left and right – so what happens when the insurance companies start picking up the tab?”

“People won’t notice that their State funded programs have been removed until 2 years later when they are saddled with higher insurance premiums and no services. But people have short term memory and will have completely forgotten how they got there.”

How deeply has big pharma parasitized the State of California? April spied a rider to the bill that’s a real blood-sucker: “There is an additional, tag-along clause in SB 946 regarding HIV reporting.”

But what does “HIV reporting” have to do with Autism? Or even Gardasil? The answer is – California is broke, and in order to make up its endless budget shortfall, it is selling its children into pharmaceutical slavery.

Here’s how it works. Beyond asking for Gardasil, children in California can receive handfuls of the FDA’s most deadly drug – AZT – for another phony diagnosis – that of “HIV positive.”

AZT is a bone-killing, blood-suppressing, liver-destroying drug, recycled as a failed chemotherapy agent into the gay community in the late 1980s. It was given to gay men who were told they were “HIV positive,” but it did not help. The shameful and oft-hidden reality is that the death toll attributed to “HIV” in the 1990s was a direct result of AZT. Hundreds of thousands of gay men took high doses of the drug, though they were not sick, and died a short, agonizing death as a direct result.

The numbers tell the story – before the introduction of AZT, the “AIDS” death toll in was a little above 10,000 per year. After AZT, the number jumped to close to 50,000 per year, and stayed there until AZT was reduced from 1200 milligram doses, down to one or two hundred milligrams. AIDS researchers claimed a victory at that point, but the reality was that they just stopped killing so many patients so quickly. This is a well-known and ‘open secret’ in the AIDS community, but like all uncomfortable truths, it is swept under a rug, out of sight of the American public.

But the biggest open secret in ‘HIV care’ is the tests themselves. HIV tests come up “positive” or reactive for hundreds of reasons – there is no end to the number of cross-reactions that occur with this obscenely immoral test. HIV tests do not test for any particular particle – they are cross-reactive with proteins that every human body produces daily. The medical literature demonstrates ably that HIV tests come up positive for the ingredients contained in – get this – HIV tests! That’s right. Taking an “HIV test” can itself make you “HIV positive.” And so can being vaccinated! Having the flu! Drinking milk! The list goes on and on.

And if a child of a parent who has been given this false diagnosis requests a test, in California, she or he can receive one without parental consent, or even awareness – and the drugs will follow: AZT, its many clones, and the drugs which replaced it – less toxic in the immediate dose, but fatal in the long-term.

A parent never has to know. Your child can go to school, be filled with anxiety and dread about diseases which they do not have, request drugs which will kill them, and receive them, eat them, swallow them, and be poisoned by them, all without your consent or awareness. You never have to say “yes.” You never even have to know.

And your child can come home, and fall ill with a mortified liver, or unheard of gastric problems, or skin that peels off in bloody swaths – such are the well-recorded effects of Gardasil, AZT or Nevirapine. And no one will ever be able to tell you why; and no one will be responsible.

Increasing the Numbers, Selling Children to the State

April revealed the ‘insurance’ bill as a wholesale scam to get insurance companies off the hook for vaccine damages. The poor get nothing, the State removes the help it now offers, and two years later the whole thing disappears. But these agents of pharmocracy have also crafted an add-on, one that will increase the number of “HIV positive” young people – especially lower-income victims of government schools. April writes, “When a person comes up HIV positive it must be reported to the State Health Officials. This generates revenue for the State. However, there’s a lengthy form that many don’t bother to fill out.”

But, says April, the insurance bill “does away with the form, allowing them to put the person diagnosed with HIV on a list, thereby increasing the number of reported cases, and increasing the revenue for the State.”

So what’s the harm, you ask? We’re reporting more cases to the State. But remember, these tests and diagnoses are criminally negligent, and allow doctors to sell the most toxic – and most expensive drugs – to entire populations. But what if the populations can’t afford the drugs?

That’s where you come in. The tax-payers pay drug companies to give deadly drugs to the “HIV positives,” in California, and around the world.

“And you’d better believe that in the next reporting cycle we’ll see headlines reading ‘California HIV rates soar.'” says April. “People will have no idea this is due to this change in law, and will be begging for the HIV vaccine. Low and behold there is already a law in place that will allow minors to – you guessed it – take the HIV vaccine without parental consent.”

“Moonbeam knew what he was doing.” She says. “Both of these bills were to be signed as planned on the same day as a mirage. Parents will think, ‘Victory on one side, defeat on the other.’ But really the only one who wins is Big pharma; increased revenue for the State so they can continue their raids on health food stores. And Brown probably confused people enough to get re-elected.”

The result of this crisis is that there will be more dead children. More deaths from vaccines and deadly chemicals given to minors – both U.S. citizens and illegal aliens. Is this an undercover targeting of the poor in California? Or are do-gooding liberals so in love with the myth of ‘better living through chemistry’ that they can’t be bothered to read one single package insert from an actual drug or test that they mandate?

Either way, the only solution to this crisis is to nullify Brown’s ruling. Parents must withdraw all consent from the State to perform medical procedures on their children, even if that means pulling them out of public schools, and starting a home-schooling or charter school in your area – or in your home. Further, ‘we the people’ have to share medical information openly and without concern for what the Federal Government considers appropriate. If they won’t show us the package inserts, and give us freedom of choice, then we will.

It is up to you – everyone reading this – to go and talk to your friends, family, school officials, local parent groups, about these deadly myths: The myth of the ‘virus that causes cervical cancer.’ The myth of ‘life-saving AIDS drugs.’ And they myth of ‘HIV testing.’

These may be hard subjects to broach, but we all have a responsibility to self-educate, and to save those who cannot yet make critical decisions from a State which has been lobotomized by an infected ‘science,’ which cares nothing for facts, critical thinking, compassion or choice. We must all of us, every day, fight tyranny, most of all by interjecting reality into the public square, by speaking about controversies, and by supporting independence of thought and action throughout our troubled country.