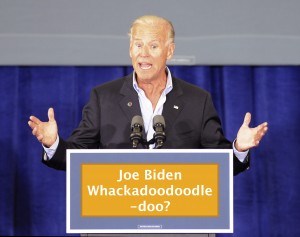 A few years back, the press was lampooning Joe Biden at every turn. They loved to quote his gaffes:

“I mean, you got the first mainstream African-American who is articulate and bright and clean and a nice-looking guy. I mean, that’s a storybook, man.” (about Barack Obama, January 31, 2007)

“When the stock market crashed, Franklin D. Roosevelt got on the television and didn’t just talk about the, you know, the princes of greed. He said, ‘Look, here’s what happened.’” (2008)

There was no commercial television when the market crashed in 1929, and Roosevelt wasn’t president then.

A few years ago, Biden was considered an inept clown. The fact that he was a heartbeat away from the presidency was something people didn’t want to think about at all. As commander-in-chief, he might punch in the codes for a nuclear attack while thinking he was calling his wife about dinner.

And now…Biden is a serious candidate for the Oval Office.

How interesting. One might infer all the networks and the major papers are working from the same script.

They’re pushing Biden because he could take Primary votes away from Bernie Sanders and thus leave a clear trail for Hillary to the nomination? Perhaps.

Whatever the reason, the press operates in unison. And not just in this case.

However, if the big three networks routinely disagreed on major stories, the effect would be catastrophic for the advancement of mind control. Viewers would be forced to think, compare, contrast, consider.

The mainstream game is the manufacture of seeming difference—“well, we have three separate major television networks”— when in fact there is one network.

What about FOX? It appears to represent the anti-Democrat point of view. But in forwarding a Republican agenda, it fosters its own illusion of difference. Why? Because on key issues (e.g., big government, Globalism, militarized police forces, the primacy of the medical cartel), the two major Parties are not different; they are on the same page.

The Biden story proves the networks can simultaneously change their minds (from “idiot” to “capable”) without even blinking, without even a moment of embarrassment.

“Look, Bob, just a year ago we were saying Biden was deranged. Now we want to make him a statesman? Isn’t that a risk? I mean, don’t we look like fools?”

“Don’t worry, Chet. People don’t remember what they had for breakfast yesterday. It’s not a problem. And we can always double back and call him an idiot again if we want to.”

But isn’t it obvious we’re pushing Biden so he can take Primary votes away from Bernie Sanders and hand Hillary the nomination?”

“It might be obvious to you, but you’re a reporter, and you know how to keep your mouth shut. Let’s just say, as far as Biden is concerned, the situation is fluid. We can make him into anything we want to. Clown, statesman, Obama’s choice, foreign policy expert, idiot, Party hack, Senator with a long and distinguished record, wackadoodle.”

“My wife doesn’t like him. He came up behind her at a party, put his arms around her and kissed her on the neck.”

“Yeah. If need be, we can find women who’ll call him a serial sexual harasser. It all depends.”

“Just kidding. Let’s get a drink.”