Even a FOX news affiliate is now asking who helped Holmes in the Batman murders in Aurora.  Where did Holmes get the money for all his weapons and gear purchases?  Who showed him how to rig his apartment with a sophisticated array of explosives (or did the rigging for him)?  Who let Holmes in through the side exit door in the theater?

No major media outlet, however, has yet asked who Holmes’ doctors are.

But a young man, Torrence Brown, who was in the Aurora theater last Friday night during the shooting has retained a Beverly Hills lawyer, Donald Karpel.  Business Insider (linked at infowars) states that Torrence Brown is filing a lawsuit gainst Warner Brothers, the theater, and Holmes’ doctors, who “prescribed many medications without keeping an eye [on] their patient, [attorney] Karpel argued.” 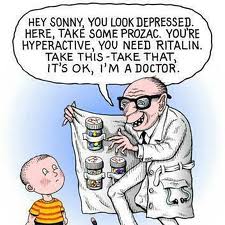 The odds are Karpel doesn’t know who those doctors are, but if the lawsuit advances he may get a chance to find out.  Clearly, the plan is to interview these physicians during the discovery process and lay bare their drug-treatment protocols for James Holmes.

It’s an open secret that Ritalin, Prozac, Zoloft, Paxil, Wellbutrin, and other psychiatric medications can and do cause violent behavior, including suicide and homicide.

Here’s the catch.  Citing doctor-patient confidentiality, these physicians can refuse to disclose what drugs they gave Holmes, making the lawsuit difficult to pursue in this area.

Assuming Holmes did (or does) have prescribing doctors, the doctors can simply state they saw no unusual drug-induced behavior on Holmes’ part and leave it at that.

Attorney Karpel may have to work the case from another angle: find witnesses who can reliably state what medications Holmes was on, and then track them to his doctors.

Don’t assume this is a walk in the park.  You can be sure the American Psychiatric Association and the companies that manufacture the drugs in question have eyeballs on Aurora right now.  These players don’t want the truth to come out: the drugs cause people to commit murder.

There is a tight fit between these players, and the cops, the FBI, and prosecutors in the Holmes case.  Why?  Because all parties want a smooth road to a guilty verdict.  They don’t want a jury deciding that psychiatric meds impelled Holmes to commit murder.  Therefore, it’s probable that law-enforcement people on the scene in Aurora are combing through witnesses and telling them not to speak about the case.  This happened in the 1999 Columbine school shootings, where it finally emerged that one of the shooters, Eric Harris, was on Luvox, an SSRI antidepressant that can push a person over the edge into mania and violence.

In the fall of 2011, in Canada, Judge Robert Heinrichs ruled that a 16-year old, who suddenly stabbed his friend to death, “no longer poses a risk to anyone and that his mental deterioration and resulting violence would not have taken place without exposure to Prozac.”  The judge therefore refused to send the case to an adult court, where the sentence for the 16-year old would have been much more severe. From the point of view of law enforcement, this is the kind of “complication” that can jump out of the box when the medical drugs take center stage.

Mainstream reporters can demand to know what meds Holmes may have been on.  Yes, they can.  They can apply pressure.  But there is an obstacle.  The companies these reporters work for survive on pharmaceutical advertising.  A journalist (who shall remain nameless) who once worked for a major US newspaper told me the following story: his paper ran a piece that questioned the safety of vaccines; the next day, a gaggle of suits carrying briefcases marched into the newsroom and headed straight for the editor’s office; the suits were from the company who made one of the vaccines named in the article; the company was also a buyer of significant ad space in the newspaper; the suits proceeded to blast the editor, as if he worked for them.

Well, in a real sense, he did.

UPDATE:  Fox News is now reporting that Holmes mailed a package to a University of Colorado psychiatrist before the killings, where it has sat in the mailroom, undelivered.  The package contains a notebook, in which Holmes laid out “details about how he was going to kill people.”

This Aurora psychiatrist is also a professor at the University.  His name is not disclosed.  No one in law enforcement will reveal what’s in the notebook.  A judge has already placed a gag order on it.  Of course, the real question is: who is the psychiatrist and was he treating Holmes?  If so, with what drugs?

Combing through the extensive faculty directory of the department of psychiatry at the U. of Colorado (Anschutz Medical campus), I find six names, just from w-z, who fit the bill as both psychiatrists and teachers.  It’s a long list.