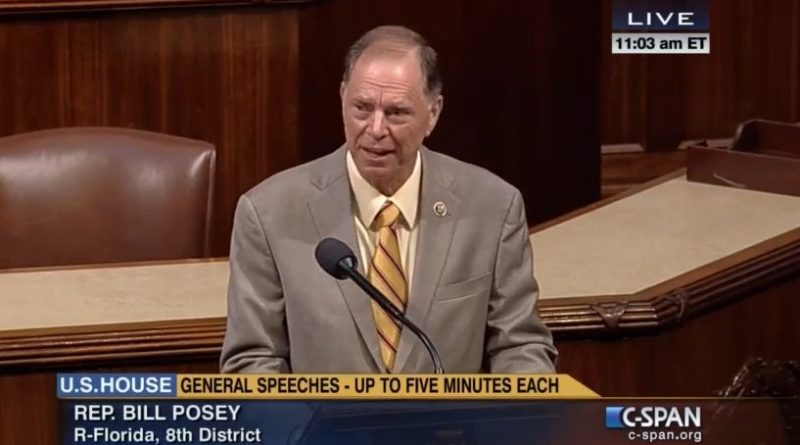 Representative-elect Mark Green (R) (Tennessee) (twitter) pledges to investigate claims that the CDC is fraudulently managing the vaccine-damage data they collect. This story is a developing.

In light of this development, I am re-posting this article of mine from July 2015. July 2015 was seemingly the last time a Congressman took a stance on this issue — and did so on the House floor — in order to get claims of fraud into the Congressional record.

“…the [CDC] co-authors scheduled a meeting to destroy documents related to the [MMR vaccine] study. The remaining four co-authors all met and brought a big garbage can into the meeting room and reviewed and went through all the hard copy documents that we had thought we should discard and put them in a huge garbage can.” (William Thompson, CDC researcher)

On July 29, 2015, US Congressman Bill Posey made his last stand on the floor of the House. Granted five minutes to speak, he laid bare the lying of the CDC in a now-famous 2004 study that exonerated the MMR vaccine and claimed it had no connection to autism.

“No connection to autism” was the lie.

Congressman Posey read a statement from long-time CDC researcher William Thompson, one of the authors of the 2004 Pediatrics study designed to determine, once and for all, whether the Measles-Mumps-Rubella vaccine could cause autism.

Thompson saw and participated in violating the protocol of the study. He was there. He helped his co-authors destroy documents that would have shown an MMR-autism link.

You can see a transcript of Congressman Posey’s remarks here (on the ageofautism.com website), which includes his reading of a statement from whistleblower Thompson.

Posey pleads with his colleagues for a Congressional investigation.

Of note: two of the CDC researchers on the infamous 2004 study, who according to Thompson, destroyed vital documents, are Coleen Boyle and Frank DeStefano. They are both high-ranking executives at the CDC in the area of vaccine safety.

This calls into question every single CDC study, under their tenure, that claims vaccines are safe.

“However, because I [Thompson] assumed it [destroying the documents] was illegal and would violate both FOIA and DOJ requests, I kept hard copies of all documents in my office and I retained all associated computer files. I believe we intentionally withheld controversial findings from the final draft of the Pediatrics paper.”

Thompson has the smoking-gun documents. So does Congressman Posey. I believe others do as well.

There are lawsuits to be filed. Eleven years have passed since the CDC committed its crime of concealing the MMR vaccine-autism connection. How many parents, never informed of the truth, have permitted their children to receive this vaccine? How many children have been struck down by the vaccine?

The lawsuits should be filed against the CDC and the individual authors of the 2004 study. Lawyers must depose every CDC employee who had knowledge of the crime.

And what about the fact that the MMR vaccine is one of the shots that has been mandated, by law, in California (SB277), in other states, and in Australia? Mandating neurological destruction of children is a crime that must be investigated and punished. If these states (and other countries) insist on keeping the MMR on their schedules, they are guilty parties.

Here, for background, are earlier articles I wrote about whistleblower Thompson, starting when the story broke in the summer of 2014.

Understand what we are dealing with here, in terms of public exposure: the author of a peer-reviewed and published study; the author who has worked for many years at the CDC; the author who participated in destruction of vital documents; the author has come forward and admitted his crime and the crime of his colleagues. This kind of confession never happens.

But it did happen.

And this story and what it means must not die, no matter how major media outlets try to spin it or ignore it.

Government officials anywhere in the world who make this continuing crime possible are liable.

So are manufacturers of the MMR.

Get busy. Expose the truth.