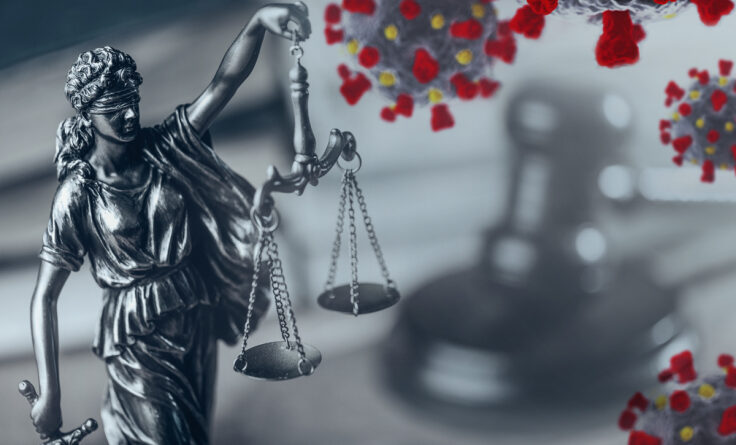 Ohio attorney, Thomas Renz, on behalf of plaintiffs, has filed a case against the state of Ohio and Governor Mike DeWine. Renz is asking for a jury trial.

This case, in the current climate, should provoke intense interest from the public, and from every lawyer within hailing distance.

Here is the impressive opening salvo in the court filing:

“In recent months, entire states have been imprisoned without due process and with the clear threat to impose such lockdowns again, interstate travel has been severely restricted, privacy rights have been devastated, numerous business takings without compensation, and many regulations being implemented without statutory process requirements under the guise of a health emergency that is roughly as dangerous as a seasonal influenza outbreak. The plaintiffs in this case have all been injured in various capacities by these unconstitutional actions, and without action by the Court, will be left without redress. More terrifying, without action by the Court, the Court will be setting future precedent that will allow states to withhold fundamental Constitutional rights, in violation of US Supreme Court precedent, circumventing the various levels of scrutiny applied to such rights, and justify such actions under public health emergency orders without subjecting those orders to any real review—just trust the bureaucrats because they are the experts.”

Here is the most important point: “We humbly ask the Court in this case to…Recognize that the political process and operative orders are invalid if based on false or misleading information… and recognize the criticality that all future emergency orders be based and maintained on clear, honest facts—particularly when such orders are infringing on Constitutional rights.”

In other words, a declared State of Emergency cannot stand on the mere basis of arbitrary edict.

People can’t be locked down and restrained from earning a living and having contact with other humans simply because a state authority decides to issue such orders.

If this case goes to trial, the door will open to the presentation of fact and science.

Attorney Renz, for the plaintiffs, is well aware of this, and his filing is studded with bold and accurate claims of fact:

“According to recent data from the Ohio COVID-19 Dashboard, we can see that the ‘spike’ in cases is actually just a spike in testing. The State went from a few thousand tests per day to 25,000 tests plus per day. The positivity rate for COVID-19 has remained fairly steady but there have been more tests.”

“When the Emergency was declared we heard a daily drumbeat about the danger and deaths related to COVID-19. Now that the case fatality rate has been shown to be roughly the same as the yearly flu…those [death] numbers are simply not scary to the public. As a result, the State sees no impact from talking about
fatalities and has instead begun testing more so they could tell us there are more cases.”

“The PCR tests are generally viewed as the means of determining if a patient has COVID-19. The problem is that the inventor of the PCR test, who won a Nobel Prize in chemistry for the invention, specifically stated that the test was not well-suited to and never designed to diagnose disease. Much has been made about this in the press and elsewhere but the reason there are issues with PCR testing in relation to COVID is that PCR testing cannot detect how much of a virus exists in a person. Exposure of the existence of incomplete traces of a virus do not mean a person is infected with a disease [,] which is part of the reason the PCR tests have an elevated rate of false positives.”

“…there is not even a true standard for testing…Instead we have numerous tests from numerous vendors that may or may not have a similar standard for what it means to ‘have’ COVID-19. The CDC, governor, and ODH [Ohio Department of Health] know this so they have allowed for the diagnosis of cases based on as meaningless criteria as a cough in a community in which COVID supposedly exists.”

Plow through this quote and then receive the translation below: “Another document also came to light that is critical in demonstrating the egregiously misleading nature of the public COVID-19 data. On the final paragraph of page 39 of a document published by the FDA regarding instructions for a COVID-19 test is the following quote: ‘Since no quantified virus isolates of the 2019-nCoV are currently available, assays designed for detection of the 2019-nCoV RNA were tested with characterized stocks of in vitro transcribed full length RNA (N gene; GenBank accession: MN908947.2) of known titer (RNA copies/μL) spiked into a diluent consisting of a suspension of human A549 cells and viral transport medium (VTM) to mimic clinical specimen’.”

“In plain English this means that there are no available pure 2019-nCOVvirus isolates to test against so instead an educated best guess is being used. The question this leads us to is how accurate can a test be for a virus that has not been defined…? If our freedoms are to be abridged under an emergency declaration related to a disease, should it not be a requirement that the disease at least be defined?”

As you can see, this case is being argued not only on Constitutional grounds, but on major and deep issues of science. The plaintiffs are not accepting “the Word from the experts.”

There is no reason why they, or anyone, should surrender and accept.

In Ohio, a bright light is shining in the darkness.