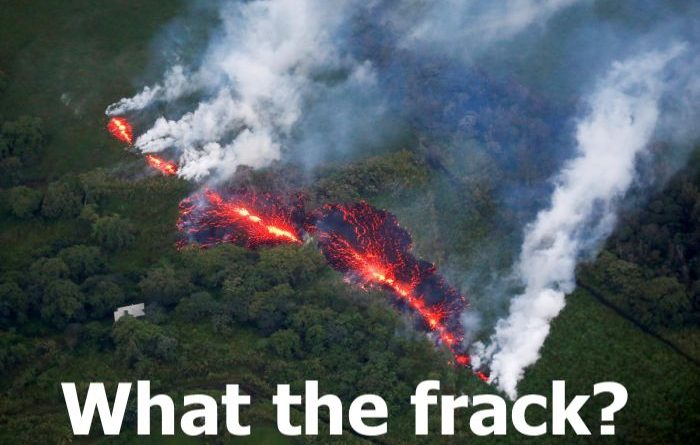 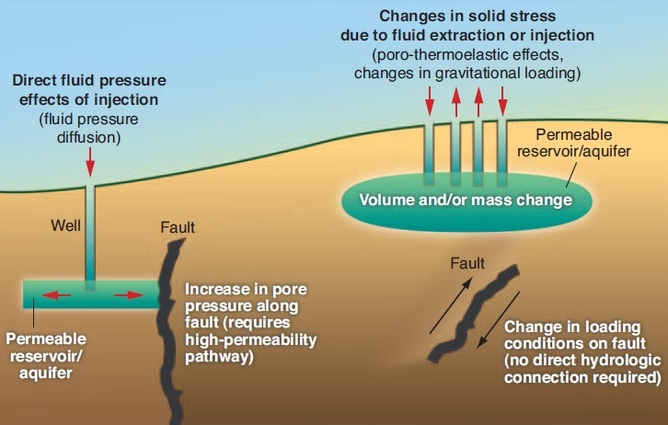 On the Big Island of Hawaii, where the Kilauea volcano has explosively erupted, there is a geothermal energy plant. It is the Puna Geothermal Venture (PGV) Plant, in Puna.

There is a long-running debate about whether PGV is fracking. The debate may be a matter of terminology, because in the geothermal process, as hawaiifracking.com reports, “…the drilling and the injection of cold water into hot rocks used in geothermal energy plants does fracture the rocks, which can induce earthquakes and through contamination of the atmosphere and water tables can affect our health and safety.”

Whether deep injection of fluid aims to capture oil, gas, or heat (geothermal), the beginning stage of the process is the same.

Earthquakes induced by this water-injection could obviously trigger a volcano.

For example, here is an alarming article about a geothermal project in Switzerland. Swissinfo.ch, December 10, 2009: “The authorities in canton Basel City say they will cancel a geothermal energy project, which three years ago caused minor tremors that damaged many buildings.”

“A risk analysis study published on Thursday found that the danger of setting off more earthquakes was too great if drilling at the site resumed.”

“The project was put on hold three years ago after thousands of claims for damage were filed with insurers. Total costs for the damage were around SFr9 million ($8.78 million).”

“The study, commissioned by the canton, concluded that Basel was ‘unfavourable’ for geothermal power generation.”

“It said the resumption of Deep Heat Mining project and its operation over a 30-year period could set off around 200 tremors with a strength of up to 4.5 on the Richter Scale – in 2006, the quakes were about 3.4.”

“This would result in damages up to SFr40 million.”

“The Basel facility drilled five kilometres into the earth. The borehole was designed to be injected with water to capture the extreme heat. Back at the surface, the hot water – at a temperature of around 160° Celsius – would run a steam turbine coupled with a generator.”

This Swiss article outlines the risks, and also confirms that deep water-injection is used in the geothermal process—which can and does trigger earthquakes.

Here is another reference—The Guardian, July 11, 2013: “Pumping water underground at geothermal power plants can lead to dangerous earthquakes even in regions not prone to tremors, according to scientists.”

“Prof Emily Brodsky, who led a study of earthquakes at a geothermal power plant in California, said: ‘For scientists to make themselves useful in this field we need to be able to tell operators how many gallons of water they can pump into the ground in a particular location and how many earthquakes that will produce’.”

“It is already known that pumping large quantities of water underground can induce minor earthquakes near to geothermal power generation and fracking sites. However, the new evidence reveals the potential for much larger earthquakes, of magnitude 4 or 5, related to the weakening of pre-existing underground faults through increased fluid pressure.”

“The water injection appears to prime cracks in the rock, making them vulnerable to triggering by tremors from earthquakes thousands of miles away. Nicholas van der Elst, the lead author on one of three studies published on Thursday in the journal Science, said: ‘These [injected] fluids are driving [earthquake] faults to their tipping point’.”

“The analysis of the Californian site showed that for a net injection of 500m gallons of water into the ground per month, there is an earthquake on average every 11 days.”

“Heather Savage, a co-author on the same study said: ‘It is already accepted that when we have very large earthquakes seismic waves travel all over the globe, but even though the waves are small when they reach the other side of the world, they still shake faults [such as the faults induced by geothermal water-injection]. This can trigger seismicity in seismically active areas SUCH AS VOLCANOES where there is already a high fluid pressure.” (emphasis added)

So, on the Big Island of Hawaii, where there is a massive volcanic eruption underway, there is a geothermal plant, PGV. How close to the volcano is PGV?

The Washington Post, May 12: “Long a concern for residents and the target of lawsuits challenging its placement ON AN ACTIVE VOLCANO, the Puna Geothermal Venture (PGV) is a major safety issue [i.e., chemicals stored at PGV] in the wake of the eruptions and earthquakes that have shaken the Big Island for days, government officials say.” (emphasis added)

I see. PGV is ON the volcano. Other reports claim PGV is 15 miles from the volcano. In either case, PGV is close, very close.

Who owns PGV? Ormat Technologies. Through internal merger and stock swapping, Ormat appears to be a jointly owned Israeli and US company now.

Ormat is no stranger to scandals. At blog.heartland.org, H Sterling Burnett writes (4/1/15): One scandal that could haunt [Harry] Reid for his remaining time in the Senate (and possibly beyond) was reported on recently in the Washington Free Beacon and Courthouse News. It seems the Reid helped the green energy company, Ormat Technologies, a firm that owns and manages geothermal plants in California and Hawaii, secure nearly $136 million in economic stimulus funding from the 2009 American Recovery and Reinvestment Act.”

“Reid’s ties to Ormat are deep. The company runs geothermal plants in Nevada and Reid has been a big booster of the company in D.C. As reported in the Free Beacon, ‘Reid bragged about securing Ormat a $350 million loan guarantee from the Department of Energy (DOE) and took credit for expanding the Treasury program that the former employees say illicitly provided Ormat with millions more in taxpayer funds’.”

“It is also worth noting that Ormat’s DOE award came a year after investors sued the company for allegedly inflating its stock price through ‘fraudulent accounting and overstated financial results.’ Ormat settled the allegations in 2012 for $3.1 million.”

A massive volcanic eruption on the Island of Hawaii.