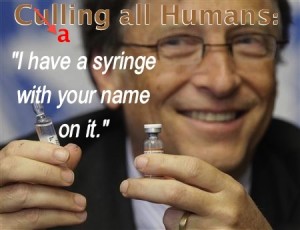 Here is the direct quote from Bill Gates’ grant-award machine:

An anti-vaccine surveillance and alert system

Seth Kalichman of the http://www.uconn.edu/ in the USA will establish an Internet-based global monitoring and rapid alert system for finding, analysing, and counteracting communication campaigns containing misinformation regarding vaccines to support global immunization efforts.

This means the attack is on.  Gates intends to do a surveillance operation across the Internet and locate anti-vaccine advocates.  His minions will then undertake a counter-insurgency campaign to neutralize them.

How does such an operation work?  I’ll tell you how it works: “This writer has no medical credentials.”  “This writer is spreading dangerous information that will harm children.”  “This filmmaker tells lies about the most important medical technology the world has ever seen.”  “The evidence for vaccination is overwhelming, and this writer is operating out of the Dark Ages.”

And that’s just the nice stuff.

“This writer was once an MD, but it’s been said he gave up his practice after several patients made complaints to the medical board.  Now he spends all his time attacking vaccines.  He’s a criminal menace.”

“Don’t read anything by this writer.  He’s obviously mentally ill.  He wants you to stop vaccinating your children, so they can catch life-threatening diseases.”

And it will go downhill and get nastier from there.

This is Nixon’s dirty-tricks war all over again.  But instead of having a few million dollars in a slush fund, Gates has billions at his disposal.

He’s going to use surrogates to do his work for him, so it will be difficult, in many cases, to know where the attacks are coming from.  That’s how cowards operate.  They slink around behind the scenes and let other people do the heavy lifting.

Gates is obviously out to create an atmosphere and set a tone for legislation that would make vaccination mandatory everywhere, with no exemptions allowed.  That’s what he’s shooting for.  That’s his wet dream, the one that goes hand in glove with depopulation, his mountaintop desire.

The press, as always, will be on his side.  They were on his side by giving short shrift to the explosive story out of India, where 47,000 cases of paralysis were caused by his polio vaccine.

He intends to create his very own Surveillance State, in which the targets are all Internet reporters and groups that have dug up the real facts about vaccines.  The facts the medical cartel wants to hide in their vaults: vaccine deaths, paralysis, maiming, brain damage, autism, immune dysfunction…

He wants to create a chilling effect, for those who are thinking about covering the vaccine issue honestly.

Well, here’s a newsflash.  Those facts are already out there, on thousands and thousands of sites.  The horse left the barn years ago.

He’s late to the party, but he’s going to throw a lot of money at the problem.  Essentially, he’s opting for suppression of accurate journalism.  Like so many before him, once he wrangled his fortune in the free market (?), he turned around and realized he didn’t want a semblance of freedom anymore.  He only wanted control.

Those of us who have been writing and speaking about vaccines for years would love to go up against Gates’ medical doctors in an open debate.  Nothing would please us more.  But Bill doesn’t want that.  People like him are terrified of openness.  So be it.

He can take the low road.  He’ll only induce more opposition.  That’s the way his style of attack works.  People who were asleep will wake up, once they realize he’s just another puffy Marmaduke who, when he doesn’t like the game, decides to take his bat and ball and go home.

And he will go home.

His money against our freedom is a game in which many of us like the odds.

Go ahead, Bill.  Deal your first greasy card from the bottom of the deck.  We’ve got eyeballs on you, too.