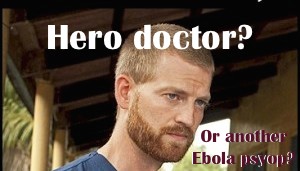 Every psyop needs heroes as well as villains. So-called epidemics are managed out of a playbook.

The playbook looks very much like something the CIA would come up with.

I’m going to give you my raw notes. They tell the story.

One: Here’s how the medical matrix is built: “Heroes come to the rescue.” Doctors set up clinics in the middle of epidemics and save lives. They work miracles.

Three: Globally, there is great disparity in medical care for the rich and the poor. This disparity must be overcome. This is the great mission.

Four: These are all lies.

Five: And many doctors, medical bureaucrats, pharma executives, researchers, and NGO organizations know these are lies.

Six: No bacteria/virus-epidemic will ever be solved by medical intervention, because those epidemics aren’t caused by germs. They’re caused by weakened and destroyed immune systems, which can’t fight off the germs.

Seven: Not long after one epidemic runs its course, a new one begins in the same territory.

Eight: It’s all about the terrain, in which debilitated immune systems are a chronic condition.

Nine: Any old germ which sweeps through such an area kills large numbers of people.

Ten: Widespread immune-system failure is caused by non-medical factors, and can only be fixed by eliminating those factors.

Twelve: The image of the heroic doctor is actually promoted as a diversion, a cover story, a false trail, a way to conceal the true causes of illness—and a way to refrain from eradicating these true causes.

Thirteen: A debilitated and destroyed population doesn’t have the ability to resist corporate takeover of their countries’ land and resources.

If you want a perfect example of the cover story, read the interview-transcript of the “Democracy Now!” episode, “Dr. Paul Farmer on African Ebola Outbreak: Growing Inequality in Global Healthcare at Root of Crisis.”

Farmer is the co-founder of a Harvard-associated NGO, Partners in Health. He’s a professor at Harvard and a special adviser to the UN. He has the reputation of a heroic doctor.

Farmer: “Well, I think the most important thing to understand is that this [Ebola outbreak] is a reflection of long-standing and growing inequalities of access to basic systems of healthcare delivery, and that includes the staff, the stuff and, again, these systems.”

Not once during the extensive Amy Goodman interview does Farmer mention the true conditions that spawn epidemics.

Instead, the theme is: inequality in healthcare.

This is the diversion.

When it comes to epidemics, this is the big lie.

Build enough medical clinics for the poor and life will change.

Sure it will. Take a person who is suffering from life-threatening gastrointestinal disease, because he is routinely drinking sewage that’s being pumped directly into the water supply, and give him antibiotics. Wonderful. Thanks, Doc.

Take a person who can barely stand, because he’s been pumped full of toxic vaccines—on top of his already-failing immune system—and give him…what? An antidepressant? AZT?

The truth is starkly obvious when you look at it.

“Your house is starting to burn down. Three of the eight rooms are on fire. You know why? It needs a new coat of paint. Look at the heroic painter. He’s up on a ladder, sanding and priming the exterior walls. Let’s give him a Nobel Prize.”

Ah, but you see, there are many people out there who want to be associated with “humanitarian causes.” They want to be known for that association. They want to feel good about themselves.

So they pick a symbol—a heroic doctor, a politician, a medical organization—and they say: “That is goodness. My ‘role models’ are good. I’m good. And isn’t what’s happening so very, very tragic. We must help. We must remedy ‘the inequality in healthcare’”.

How many dupes can dance on the head of a pin? Apparently, there is no limit.

The author of three explosive collections, THE MATRIX REVEALED, EXIT FROM THE MATRIX, and POWER OUTSIDE THE MATRIX, Jon was a candidate for a US Congressional seat in the 29th District of California. He maintains a consulting practice for private clients, the purpose of which is the expansion of personal creative power. Nominated for a Pulitzer Prize, he has worked as an investigative reporter for 30 years, writing articles on politics, medicine, and health for CBS Healthwatch, LA Weekly, Spin Magazine, Stern, and other newspapers and magazines in the US and Europe. Jon has delivered lectures and seminars on global politics, health, logic, and creative power to audiences around the world. You can sign up for his free emails atwww.nomorefakenews.com