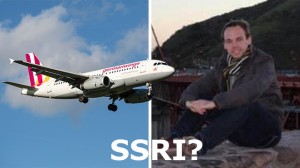 “When systemic fraud reaches a certain level where collapse of some basic institution is inevitable, the powers that be invent a different storyline. They tell an outright fairy tale and keep pushing it. They’ll even stage events that confirm the fairy tale. Anything to avoid the truth that would disintegrate the whole structure. For example: the structure called Psychiatry.” (The Underground, Jon Rappoport)

Airbus A 320 flight from Barcelona to Dusseldorf. Crashed in French Alps. All 150 aboard killed. Pilot Andreas Lubitz flew the plane into a mountain. Lubitz had seen a psychiatrist for depression.

Should airline personnel have known one of its pilots was suffering from depression? Did they know? Did they cover it up, or ignore it?

These media outlets studiously ignore the elephant in the room: the drugs used to treat depression.

This blackout is intentional. Any decent reporter would look into the antidepressants, Prozac, Paxil, Zoloft, etc., as the cause of the pilot crashing the plane.

So where is the media coverage now, in the Germanwings case? It’s virtually nowhere.

The go-to media experts in the field of psychiatry are cover-up professionals. Drug Companies, of course, buy enormous numbers of TV ads.

But beyond these factors, exposure of the truth about antidepressants and their connection to suicides and murders would take down psychiatry itself. The whole profession would collapse.

The sleeping population would stir and sit up and take notice.

Governments would be forced to admit their overt support of psychiatry is based on fraud, from top to bottom.

That is what’s at stake here.

And if the major media lived up to their (mythical) role of investigators of truth, the Germanwings story would expand into every nook and cranny of psychiatry: fraudulent diagnoses of every so-called mental disorder, for which there are no physical diagnostic tests: no blood tests, no urine tests, no brain scans, no genetic assays.

Battalions of real reporters doing real probes, backed up by media giants, would force doctors and medical bureaucrats out of their closets, and confessions would pile up.

But this will never happen, because those media giants are committed to supporting the Establishment of which they are a member.

The entire system of psychiatry—fraudulent diagnoses, dangerous and toxic drugs—is a colossus sitting on an earthquake fault. A triggering event, however, is protected from happening by the very media who should be making it happen.

This is a circle of lies.

“Since I first began working as a medical expert in product liability cases way back in the early 1990s, I’ve spent innumerable hours culling the sealed data contained within the files of companies like GlaxoSmithKline and Eli Lilly. Among other things, I long ago found evidence that Paxil and Prozac cause suicidality in adults. These discoveries then led to settlements in product liability suits brought against the two companies brought by surviving family members.” Dr. Peter Breggin

“I got involved in the Miller case. Matt Miller was a 13 year old boy who had just changed schools and was feeling nervous. His parents prompted by the teacher brought him to a doctor who put him on Zoloft. Seven days later he hung himself in the bathroom between his parent’s bedroom and his bedroom.” David Healy, Professor of Psychiatry, Bangor university, UK

Any media outlet, aware of these two statements (and many other similar statements), who did not then dig much deeper into the recent Germanwings disaster, would be actively concealing vital truth.

In other words, they would be carrying on business as usual.