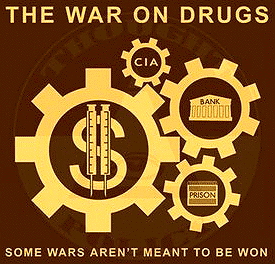 He’s waiting for his October trial to begin, after three years of delays. DEA agents arrested him in Mexico City in 2009, on drug-trafficking charges.

Why all the postponements?  US national security issues are involved.

Niebla wants to introduce evidence he says will show he, and the entire Sinaloa cartel, the most power drug-trafficking organization in Mexico, were given immunity from prosecution by the US government.

In return, Sinaloa has been providing US officials with intelligence on lesser drug cartels in Mexico, so they can be taken down.

If this sounds like a deal to permit Sinaloa to bring huge quantities of drugs into the US, that’s exactly what defendant Niebla is implying.

Federal prosecutors admit there are national-security issues in the Niebla trial.  They deny Niebla or Sinaloa were ever granted immunity by the US government.  However, they have made motions to keep unspecified classified information out of court proceedings.

Bill Conroy, who has been writing groundbreaking articles for The Narco News Bulletin, quotes Niebla’s lawyers:  “The United States government considered the arrangement with the Sinaloa cartel an acceptable price to pay, because the principal objective was the destruction and dismantling of rival cartels by using the assistance of the Sinaloa Cartel—without regard for the fact that tons of illicit drugs continued to be smuggled [by Sinaloa] into Chicago and other parts of the United States and corruption continued unabated.”

Does this in part explain the rising tide of violence in Chicago?  Are we looking at an exact parallel to what the late journalist Gary Webb described, in his explosive Dark Alliance, about US officials opening the door to massive drug-trafficking in South Central Los Angeles?

Journalist Conroy goes on to reveal a number of relevant emails captured by Wikileaks from Stratfor, a private intelligence company based in Austin, Texas.  Stratfor refuses to comment on the emails.  The company indicates that, in general, this type of email may be factual or may be intentionally fictitious.

The emails are the observations of a Mexican diplomat code-named MX1.  Noting his probable identity has already been published online, Conroy writes, “[Fernando de la Mora Salcedo is] a Mexican foreign service officer who…served in the Mexican Consulate in El Paso, Texas, and is currently stationed [or has recently been recalled] in the Mexican Consulate in Phoenix.”

Here are choice excerpts from Salcedo’s emails, allegedly sent to Stratfor between 2008 and 2011.  They bolster the idea that the US government is supporting the Sinaloa Cartel.

April 19, 2010: “…I think the US sent a signal that might be construed as follows: ‘To the VCF [Vicente Carrillo Fuentes] and Sinaloa cartels: Thank you for providing our market with drugs over the years…please know that Sinaloa is bigger and better than VCF…let’s all get back to business [and stop the violence.]’”

June 3, 2010: “They [the US and Mexican governments] want the CARTELS to negotiate with EACH OTHER…if they can do this, violence will drop and the [US and Mexican] governments will allow controlled [drug] trades…The major routes and methods for bulk shipping [of drugs] have already been negotiated with US authorities.  In this sense, the message that Sinaloa was winning was, in my view, intended to tell SEDENA [the Mexican military] to stop taking down large trucks full of dope as they made their way into the US. These large shipments were Sinaloa’s, and they are OK with the Americans.”

The explosive nature of the upcoming Niebla trial in Chicago could shed light on Operation Fast&Furious.  After all the reasons that have been given for walking guns into Mexico, suppose the true explanation is the most simple?  The US government supports Sinaloa, the biggest drug cartel in the world.  Therefore, they gave Sinaloa guns.