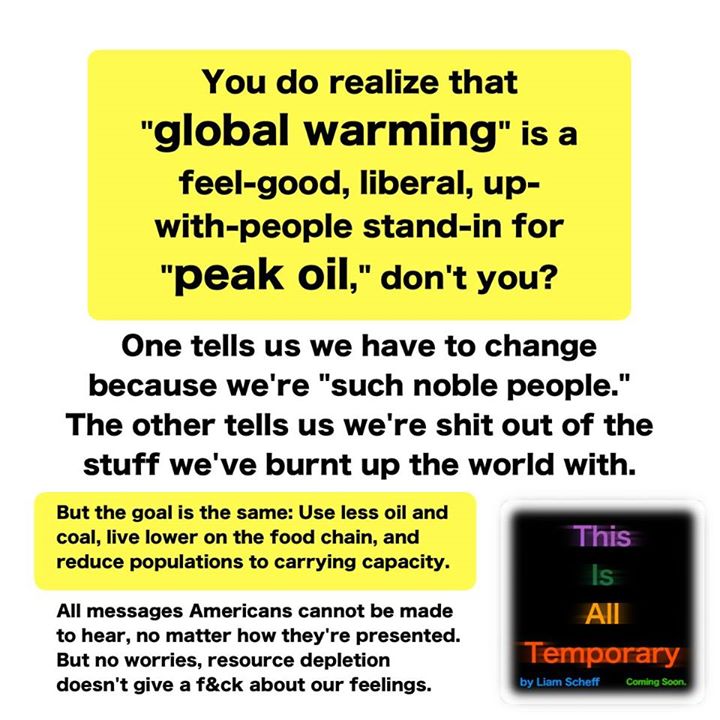 June 1, 2017, a day that will live in infamy for the liar, thieves, and killers of the new international economic order. They will see it as infamy, because their plan to sink the economy of America into a final death rattle has been rejected by Trump.

Fake climate science has been the lynch pin, justifying orders to cut CO2 emissions—but make no mistake about it, cutting emissions means cutting energy production in almost all countries of the world. THAT’S THE GLOBALIST TARGET. ENERGY PRODUCTION.

Get that one straight. The Globalist “utopia” isn’t a trillion solar collectors or a trillion windmills—it’s lights going out all over the world.

That’s the monster hiding in the closet. That’s the outcome arch-Globalists are determined to foist on the planet, because that’s the society they want to control—poverty-stricken, abject, shuffling along a bleak path to nowhere.

Trump just stuck a knife in that scheme.

Yes, I fully understand the devil is in the details, but it is up to people everywhere, who have active brain cells and can see through the climate hoax, to take this opportunity to reject, publicly, the whole climate agenda.

CO2 is not the enemy.

Do the research yourself and see if there is any way these so-called scientists can assess, now or in the past, THE TEMPERATURE OF THE WHOLE PLANET.

The science is settled? There is no room for argument?

Freeman Dyson, physicist and mathematician, professor emeritus at Princeton’s Institute for Advanced Study, Fellow of the Royal Society, winner of the Lorentz Medal, the Max Planck Medal, the Fermi Award: “What has happened in the past 10 years is that the discrepancies [in climate change models] between what’s observed and what’s predicted have become much stronger. It’s clear now the [climate change] models are wrong, but it wasn’t so clear 10 years ago… I’m 100 per cent Democrat myself, and I like Obama. But he took the wrong side on this [climate change] issue, and the Republicans took the right side…” (The Register, October 11, 2015)

Green Guru James Lovelock, who once predicted imminent destruction of the planet via global warming: “The computer models just weren’t reliable. In fact, I’m not sure the whole thing isn’t crazy, this climate change.” (The Guardian, September 30, 2016)

And these are but a tiny fraction of the statements made by dissident scientists who reject manmade global warming.

But regardless, never lose sight of agenda based on this “settled science.”

And at the same time, truly viable forms of energy production (e.g., water turbines, hydrogen), that could be brought online with but a fraction of previously chiseled government subsidies for oil and nuclear, are sitting on the shelf gathering dust—BECAUSE THE MODEL OF SCARCITY FOR THE PLANET IS WHAT THE GLOBALIST EMPIRE DESIRES.

Until such time as that model is destroyed, Earth needs energy, all the energy it can produce.

The climate criminals, working for Globalism Central, staged their Paris “Treaty” to try to torpedo that production. Obama signed on in Paris, knowing full well he was committing a criminally unconstitutional act by disregarding the vote of the US senate, a vote that was needed to confer legitimacy to the agreement.

There is nothing binding about the Paris “Treaty.” Nothing.

And today, Trump squashed it.

Might he re-enter negotiations and give away some of what he’s just taken back for America? Anything’s possible. But for now, the Paris Accord is a dead duck here in the US.

Trump is going to catch a new version of Hell for what he’s just done. But if enough Americans, and people around the world, realize the true implication of this historic day, and proclaim it, they’ll win. We’ll win. Each one of us.