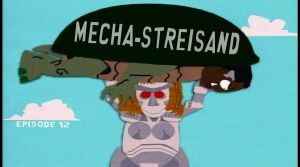 “The complexity of any mind-control program is a function of the people who are meant to be controlled. In Hollywood, you’re dealing with the most gullible, and therefore the tactic is simple. One feint, and then deliver the poison to the target.” (The Underground, Jon Rappoport)

I’ll keep the introductory background brief: political rulers need dupes. They court the famous and rich for their money; and for their vocal support, because the majority of the public adores stars. Stars are archetypes who live the lives “regular people” dream about. So if stars are fawning at the feet of a certain brand of politician, the public will tend to fawn as well. By proxy. By extension. By default.

At a Hollywood fundraiser a few days ago, Obama mingled with Julia Roberts, Gwyneth Paltrow, James Brolin, Julia Louis-Dreyfuss, and Barbara Streisand. There was no mention of George Clooney. But don’t worry; next month, he’s co-hosting a Hillary event with Steven Spielberg.

Let’s brush aside the obvious fact that, in Hollywood, it’s good to be on the Left. Good for the career.

Let’s also dispense with the sober: “Given two choices, the Democrats are better than the Republicans.”

Inside the minds of these stars, something else is going on. And it certainly isn’t a preoccupation with limiting the power of mega-corporations, who roam the world and feast on vulnerable populations, their lands and resources. The Democratic leadership (Obama, Hillary) have no interest in curtailing that operation. They’re all for it.

So what is happening in the skulls of these liberal stars, beyond political-Left conditioned reflexes?

You might say: not much. And you’d be right. But still…

It all goes back to this: “help others.”

Tucked away in stars’ minds, you might find a few socialist ideas, a few Marxist sentiments, but the big one is: “help the less fortunate.”

This vague nugget has been with them for a long time. It isn’t thought out. It certainly isn’t the lead sentence in a comprehensive understanding. Are you kidding?

For some stars, there are crusty bits of motivating image: the old Hollywood blacklist, the McCarthy hearings, the board that used to censor movies, the early civil rights movement.

For others, it’s more recent material. The anti-war protests of the 60s, smoking weed, Watergate and Nixon, the “unfair pummeling” of Bill Clinton over his affair with Monica Lewinsky.

Mainly, “helping the less fortunate” casts a wide, wide net; and not much thinking is required. That’s a plus. Let the best politicians on the Left work out the details.

However, an unlimited number of crimes are cooked up behind this Humanitarian Hustle. For example, through “greater-equality” Globalist trade treaties, we have the creation of an expanding unemployed American underclass, terminally dependent on government for survival. For example, bringing “democracy and freedom” to backward nations actually results in predatory empire-building, destabilization, chaos, pain, death. That sort of thing.

“We pity those who can’t survive on their own” holds a foul patronizing odor, especially when the political implementation of that self-righteous notion buries the less fortunate in a swamp worse than the one they’re trying to get out of.

But again, these Hollywood stars aren’t noted for thinking things through.

Instead, they jump from the central mantra to other empty generalities: e.g., more access to education and healthcare and community programs.

But now we’re going too deep for Hollywood. Please. Back off. Let’s stick with the high-flying generalities. “It allows us to feel good. And we must feel good. We’re rich and we’re sensitive human beings, so we need to hitch our wagons to a fairy tale of progress, even if there isn’t any.”

George Clooney, I have to say, is a real piece of work. He can make a movie like Syriana, which excruciatingly tracks a mega-corporate/political/intel monstrosity collaborating to produce planetary tyranny, and he supports Hillary Clinton, who’s never seen one of these monstrosities she didn’t love in real life.

And here I have to return to a story I’ve been pounding on for the last week or so: the film Vaxxed (trailer), which exposes criminal fraud at the CDC, where fake science was consciously deployed to give the MMR vaccine a free pass and pretend it had no connection to autism.

But forget the message for a moment. The film itself was shut down, canceled, closed out at two film festivals; the Tribeca in New York and the WorldFest in Houston. That’s called censorship. Of a film.

Free speech? Never heard of it.

So naturally these liberal Hollywood stars would stand up and scream. They would denounce, with all their power, the blackout. Because, if there is finally a concrete issue which these Lefties comprehend, it’s free speech in the arts.

Sorry. Not so. Not true. The defenders of the just and the righteous turn out to be cowards of the first order. They move on with their eyes straight head and they say and do nothing.

Why? Because it happens that the Left is virulently pro-vaccine. And that issue takes precedence over the inherent right to see a film.

As a matter of fact, all the Left’s programs, every single one, as enacted in Washington to support the idea of “helping others,” negates that very idea—because Help is just a cover story. It isn’t real. It never was, in Washington.

Here’s how it works. You, a venal venomous scumbag of a politician, descend on Hollywood and connect with the vague sentiments of stars: you and they feel the little people’s pain. Establishing that, you croon and moon and get them to open their checkbooks. Then you fly away, and you push programs that, while appearing to help, actually cause more misery.

Does this create an embarrassment the next time you, the politician, shake your sticky wings and tune up your fangs to dive on Hollywood and extract more money? Not in the slightest.

Mainly because the stars you harvest don’t want to know the particulars of what you do. They really don’t. And even if they did, they’re not smart enough to track the deceptions you’ve worked on them. And even if they could, why would they want to stand up and admit how they’d been bilked and conned and shucked?

They’re only smart and they only have courage on the screen.

Ask them to admit they really have no idea what the pols they’re writing checks for are doing in Washington? Fat chance.

Predictive programming in movies and the deployment of secret-society symbols? At the level at which Hollywood stars operate, things are much simpler: their minds are juvenile to the extreme. They’re politically naïve and they’re afraid.

(And if you think I’m reserving praise for the stars who are on the Right, you’re wrong. They, too, are numbskulls. They see wars and empire-building as national-security imperatives. They clamor for conquest. Hell would freeze over before they could adequately distinguish a military built for defense of the nation from a force that roams the world on behalf of corporate objectives.)

In Hollywood, there’s a political playbook that every successful actor on the Left reads. It’s only one line, so they can all understand it:  “Support the politicians who say they’re helping the less fortunate.”

It only remains for the stars to make their political support sound convincing. Well, convincing is what they’re trained to do.

When they leave one of these political soirees, after the mingling and the donation-acknowledging and the champagne-sipping and the Presidential chatting, they may for a moment wonder what it was all about. But having attended so many such staged goofs, the wondering is inconsequential. Lesser power brushed up against greater power, a tingling was felt, certain niceties were exchanged and vague questions were answered vaguely. It was an event. They, the stars, were seen by other stars, who were also looking to be seen. And The Most Important Person, the pol, the President, held their attention.

A dedication to The Good was mutually made, even if no one actually understood what it was, except The Most Important Person, who had been briefed a long time ago by his superior secret princes and kings, to whom he swore his fealty.

But don’t worry about that.

It’s in another league, to which you, the stars, have no access.

Just know your place, your beautiful place. And all will be well.

Of course, on a quiet night, when you’re alone and bored, you might look into, or at least think about, the 50-year War on Poverty, which has sucked up something on the order of two trillion dollars to turn around the plight of inner cities. You might wonder why those inner cities seem to be in far worse shape than they were in 1966, when Lyndon Johnson, the prototype of a Left share-and-care President, grandly announced the War, while he was also escalating the other war in Vietnam.

You might think about President Obama and Hillary Clinton turning Libya into a sea of chaos and pain, and sustaining ISIS in Syria while “attacking ISIS.” All on behalf of helping the less fortunate.

You might ponder Obama and Hillary standing firmly on the side of that helping-hand corporation, Monsanto, which spreads its carcinogenic Roundup from one end of the planet to the other.

And again, you might pause for a few moments and consider the unshakable Obama-Clinton support of Globalist trade treaties, which sacrifice millions of American workers on the altar of mega-corporate profits piling up in Third World countries, where, day in and day out, virtual slaves turn out products for penny-wages—no unions, no safety regulations, no environmental concerns. What a boon for the less fortunate.

You might contemplate these and other examples of liberal sentiments in action.

You might, but you won’t. You’ve acted in movie after movie where the con and the shuck and the jive were central to the plot, but somehow, in life, you just can’t pick up the same thread. You can’t see the hustler and his mark.

Because the hustler’s mark, his target, is you.

One thought on ““Inside the liberal minds of Clooney, Streisand, Julia And the whole Left Hollywood crowd” by Jon Rappoport”