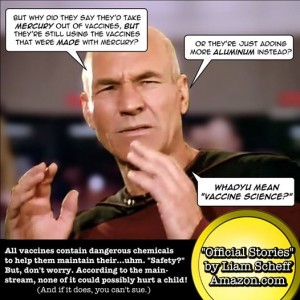 Now only a medical doctor’s note stating a person should not be vaccinated will provide an exemption—and you can be sure doctors who sign a number of these notes will be tracked, scrutinized, harassed, and attacked by the State.

SB277 requires all children who attend public and private schools to receive the full schedule of vaccines.

Home-schooled children can opt out of vaccination. Pay attention, parents.

I’ve written many articles about vaccines, about their dangers, their undeserved reputation for having eliminated contagious diseases in the West, and the absurdity of so-called herd immunity.

Here, first, I want to underline the obvious: freedom is under egregious attack. It has been replaced in the public mind by “safety and protection.”

This is a conscious formula for so much of what now passes for “culture” in America and other countries:

New, broader and more vague definitions of terrorist threats; pressure to conform to politically correct speech; the need to spy on everybody all the time; these are the signs of the times.

From the caves of 100,000 years ago, all the way forward to the Modern State, that assertion has been used to exert more and more control over the people.

At higher levels of political power, beyond direct medical issues, mandatory vaccination is being used as yet another hammer, in order to elicit compliance from citizens.

In this case, X involves the injection of toxic substances like aluminum, formaldehyde, Polysorbate 80 and numerous other harmful chemicals into the body.

A Mother Jones article (6/12/2012), “Can Exposure to Toxins Change your DNA,” reports on the damaging effects of environmental chemicals. The connection to toxins in vaccines, though not mentioned, is an obvious parallel. Here are quotes from the MJ piece:

“Most recently, researchers from Washington State University, led by biology professor Michael Skinner, reported last month that short-term exposure of pregnant rats to several kinds of chemicals caused ovarian disease not just in their daughters but also in two subsequent generations of females. Symptoms that paralleled those found in human polycystic ovarian disease and primary ovarian insufficiency, both of which can reduce fertility, were identified in the descendants of rats exposed to a fungicide, pesticides, dioxin, jet fuel, and a mixture of plastics, but not among descendants of controls [given a placebo].”

We are talking about lasting genetic changes, from parents to children, down the line.

There is every reason to believe that injecting chemical toxins (in vaccines) would have a still greater permanent effect than, say, breathing pesticides.

But don’t worry. The State is here to protect you and your children. Just obey, and all will be well.

And now, a look at the future of vaccines. See the New York Times, 3/15/15, “Protection Without a Vaccine”:

“The first human trial based on this strategy — called immunoprophylaxis by gene transfer, or I.G.T. — is underway, and several new ones are planned.”

Read that again: “the synthetic gene is incorporated into the recipient’s own DNA.” Alteration of the human genetic makeup. Not just a “visit.” “Permanent residence.”

This is where vaccination has been going since its inception, and this is where it’s going in the future: the restructuring of human DNA, under conditions sufficiently random to rule out any reliable predictions of the outcome.

And the State of California has just stamped its seal of approval to genetic alteration, by making vaccination mandatory.

You’ll be remembered for your decision.

Make no mistake about it: the entire human race has been, is, and will be (unless resistance builds to a very high roar) the subject of a vast, multi-century genetic experiment.