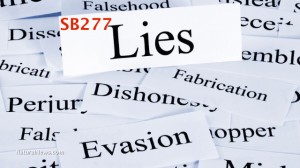 I’ll repeat myself a bit here, in case you missed my last article. Then I’ll get into something else, something dangerous that a Federal Judge knows nothing about…

Federal Judge Dana Sabraw is overseeing a lawsuit against mandatory vaccination in California.

So far, Sabraw has denied a petition to suspend mandatory vaccination for school children while the case moves forward.

He believes tradition and history are on the side of forced vaccinations. That’s because he doesn’t know what he’s talking about. Or he’s just making it up out of thin air.

As the LA Times reports: “U.S. District Judge Dana Sabraw in San Diego wrote that state Legislatures have ‘a long history of requiring children to be vaccinated as a condition to school enrollment, and for as many years, both state and federal courts have upheld those requirements against constitutional challenge’.”

I don’t see how Judge Sabraw’s opinion could be more ridiculous.

Why? Because ‘the long history’ he refers to is quite different.

SB277, the new CA law, goes against the tradition, to say the very least. SB277 breaks new ground in allowing the state to operate as a medical fascist in the area of vaccinations.

So…let’s look at one of the mandatory vaccines that’ll be injected into children in California, whether their parents agree or not. I’m talking about the DTP shot—diphtheria, tetanus, pertussis (whooping cough). Let’s give Judge Sabraw a history lesson. You know: actual history.

“Assistant Secretary of Health Edward Brandt, Jr., MD, testifying before the U.S. Senate Committee on Labor and Human Resources, rounded… figures off to 9,000 cases of convulsions, 9,000 cases of collapse, and 17,000 cases of high-pitched screaming for a total of 35,000 acute neurological reactions occurring within forty-eight hours of a DPT shot among America’s children every year.” (DPT: A Shot in the Dark, by Harris L. Coulter and Barbara Loe Fischer, Harcourt Brace Jovanovich)

“… Based on the only U.S. findings on adverse DPT reactions, an FDA-financed study at the University of California, Los Angeles, one out of every 350 children will have a convulsion; one in 180 children will experience high-pitched screaming; and one in 66 will have a fever of 105 degrees or more [all signs of acute and very serious neurological reaction].” (Jennifer Hyman, Democrat and Chronicle, Rochester, New York, special supplement on DPT, dated April, 1987)

“A study undertaken in 1979 at the University of California, Los Angeles, under the sponsorship of the Food and Drug Administration, and which has been confirmed by other studies, indicates that in the U.S.A. approximately 1,000 infants die annually as a direct result of DPT vaccinations, and these are classified as SIDS (Sudden Infant Death Syndrome) deaths. These represent about 10 to 15% of the total number of SIDS deaths occurring annually in the U.S.A. (between 8,000 and 10,000 depending on which statistics are used).” (Leon Chaitow, Vaccination and Immunization, CW Daniel Company Limited, Saffron Walden, Essex, England, 1987)

“… Barker and Pichichero, in a prospective study of 1232 children in Denver, Colorado, found after DTP that only 7% of those vaccinated were free from untoward reactions, which included pyrexia (53%), acute behavioral changes (82%), prolonged screaming (13%), and listlessness, anorexia and vomiting. 71% of those receiving second injections of DTP experienced two or more of the reactions monitored.” (Lancet, May 28, 1983, p. 1217)

“Publications by the World Health Organization show that diphtheria is steadily declining in most European countries, including those in which there has been no immunization. The decline began long before vaccination was developed. There is certainly no guarantee that vaccination will protect a child against the disease; in fact, over 30,000 cases of diphtheria have been recorded in the United Kingdom in fully immunized children.” (Leon Chaitow, Vaccination and Immunization, p. 58)

“Pertussis (whooping cough) immunization is controversial, as the side effects have received a great deal of publicity. The counter claim is that the effectiveness and protection offered by the procedure far outweigh the possible ill effects… annual deaths, per million children, from this disease over the period from 1900 to the mid-nineteen seventies, shows that from a high point of just under 900 deaths per million children (under age 15) in 1905, the decline has been consistent and dramatic. There had been a lowering of mortality rates of approximately 80% by the time immunization was introduced on a mass scale, in the mid-nineteen fifties. The decline has continued, albeit at a slower rate, ever since. No credit can be given to vaccination for the major part of the decline since it was not in use.” (Chaitow, Vaccination and Immunization, p. 63)

Again, the DPT shot will be required and mandatory in California for school children.

It helps to know history, especially since major media refuse to touch the truth with a ten-foot pole.

Shoot your child up with the DPT vaccine?

Go along to get along?

Bury your head in the sand?

One thought on ““Mandatory vaccination in CA – let’s school Federal Judge Sabraw: here’s something you didn’t know about the DPT shot…” by Jon Rappoport”