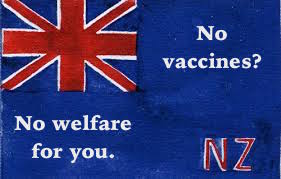 Following in the footsteps of Australia, 2014 New Zealander of the Year, Dr. Lance O’Sullivan, wants to punish people who don’t get vaccinated.

The New Zealand Herald (4/15) reports: ‘A leading New Zealand doctor has called on the Government to follow Australia’s example to cut child welfare payments to families who do not vaccinate their children, saying the policy would help protect the most vulnerable in our society.”

O’Sullivan should know better. He works with poverty-stricken families. He leads an initiative to build houses for the poor.

The issue is not vaccines, when it comes to illness among his patients.

It doesn’t matter how much medical care you force on people living in these circumstances. They will get sick. They will suffer. They will die.

Vaccines might obscure the visible symptoms of some diseases and allow doctors to conclude the shots are working, but a) the vaccines are actually increasing the toxic load on the body; b) the people who are vaccinated will inevitably break out with new symptoms; and c) the vaccines won’t cure the obvious reasons (listed above) for immune-system suppression.

You can’t substitute vaccines for the factors that actually strengthen immune systems. That’s a fairy tale.

Dr. O’Sullivan is whistling in the dark. He needs to go back and rethink his entire education. It failed to provide him with basic facts.

The idea that doctors moving into areas where, for generations, people have lived on the margins—and making medicine substitute for the essentials of health—that notion is absurd.

“Here, son. You don’t have nutritious vegetables and protein to eat, but I’ll give you a shot in the arm.”

A fantasy. A myth.

As for people in New Zealand who do have the essentials of life—good clean food, clean water, a warm home, plus money—guess what? Unless they abuse themselves with junk food and drugs, unless they’re exposed to toxic factors in their environment (e.g., pesticides), they’re in the process of strengthening their immune systems.

They don’t need vaccines in order to ward off illness. When children get sick, they’ll undergo a full and acute inflammatory response, recover, and their immune systems will be stronger.

My vote for persons of year in New Zealand are all the people who understand these simplicities and are willing to stand up for them.

The attack dogs for the vaccine manufacturing complex are on the move, worldwide. They’re saying and doing whatever they can to keep populations hypnotized and walled off from the truth about vaccines. They’re trying to pass more stringent legislation eliminating vaccine exemptions. They’re aiming to coerce everyone and eliminate freedom and choice.

They’re saying, as Dr. O’Sullivan does: We’re doing this for your own good. You don’t see that, but it doesn’t matter. We do. And we’re going to take control.

Don’t let this happen. Don’t fall for it.

Wherever you go in the world, extreme poverty and everything that goes along with it cause illness. It’s not a matter of “finding reasons for sickness” behind the obvious. The medical system and its promises actually function as a cover story and a distraction.

I’ve been writing about this issue since 1987. The people who could eliminate the conditions that cause illness and death in poverty-stricken don’t do it. They appoint task forces to do studies and make reports.

Instead, doctors bring medicines and vaccines—as if their lack were the reason for suffering and disease in the first place.

If Dr. O’Sullivan lived as his patients live for five or 10 years, he could dose himself with all the medical drugs and vaccines he wants to—and he would still sink into chronic illness. To imagine otherwise is the height of folly.

All doctors, when they offload their indoctrination, realize this. All public health agencies know this.

“Well, we may not be able to eliminate poverty yet, but in the meantime we can eliminate disease with vaccines.”

No. No you can’t. The symptoms of one disease may decline, but another disease will pop up. It’s all because—can we understand this, once and for all—people who live in conditions of poverty soon develop weak immune systems and lose their ability to fight off chronic illness.

As Ivan Illich wrote, in his 1977 classic, Medical Nemesis: “The combined death rate from scarlet fever, diphtheria, whooping cough and measles among children up to fifteen shows that nearly 90 percent of the total decline in mortality between 1860 and 1965 had occurred before the introduction of antibiotics and widespread immunization. In part, this recession may be attributed to improved housing and to a decrease in the virulence of micro-organisms, but by far the most important factor was a higher host-resistance due to better nutrition.”

Things are not as complicated as they seem. Most doctors don’t and won’t understand the simplicities.