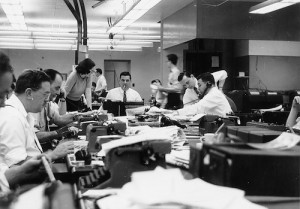 “Because it’s not true!” She says it with unintended force from air that pummels its way out of her lungs and guts and makes the words throaty and heavy.

Joe paces the length of the long, open desk. Rob and Kelly are at their stations, six feet on either side, clicking away, like statues with motorized fingers. Joe cocks his head. She sees him winding up. He doesn’t surprise her.

“Because,” he savors the phrase, “it’s not ‘true.’” He lets the words ring. “Well, I guess we can — lemme go tell Natalie to shut down reception because we can all go home. We’re not running a paper, we’re running a fortune-tellers’ clinic.”

She says nothing. She’s learned that much. Just waits as he goes through his gyrations. His greatest hits: “Truth and appearances of truth, getting the story, pounding the pavement, making the calls, vetting your sources,” and the bayonet at the end of the rifle: “And what does your opinion have to do with truth?”

He’s so wound up he doesn’t let her finish. He screams out, “Don’t say it: Not True.” Rob snorts a little, because the self-congratulatory delivery is funny, not because it’s right. Andie looks at him. He keeps typing. Andie’s turn, and she goes.

“Don’t say Fukushima. Don’t say it. That is JAPAN! Andie!”

“Joe, Goddamn it, when are you going to wake up to this fucking story?”

“When are you going to wake up and get it: we’re 7,000 miles from Japan. We’re 2,800 miles from Arizona. It is a story, Andie. I am not saying that it isn’t a story. But I am telling you that you can’t accuse the NRC of being a bunch of lying industry prostitutes who don’t care if they blow up entire towns without getting someone on the record first –”

“On the record. Who has some iota of authority or achievement –”

“I didn’t say you couldn’t quote the critics. But that doesn’t start the Goddamned article, Andie.”

She’s silent for a moment. Her head rumbles:  Why didn’t I stay at an independent magazine. Why did I exchange flattery and a salary as a reward for having honestly covered the war? Why did I have bills to pay, a depressed, half-suicidal poetry-teacher husband to support, and a bright, lonely child to worry about?

“Fine. I will find someone. But the critics are in paragraph four.”

“Eight. You cover the story for seven paragraphs before you tell the people that everyone in charge are not-so-secretly throat-cutting bourgeois capitalists –”

“Who want nothing more than — “

“The end of the country as we know it.”

“Joe, you’re such….” She makes herself stop speaking.

Andie is quiet for a moment. Some part of her is close to tears, but she won’t show it. But it’s small compared with the part that wants to get up, rip the tiny dick off this asshole’s body, shove it into his mouth and tell him to write his own fucking copy. The sell-out bastard. But don’t you have to believe in something before you can be a sell-out? she thinks.

She’s drifting. She raises her eyebrows as though she heard a noise somewhere in the room. “Something I can do for you, Boss?” She says, spitting out the word.

Joe steps away, and points himself back to his corner of the large open office. He pauses. “Andie, you’re a hell of a writer. But you can’t just write what you feel.”

The last word drops like a stone in her ear. That’s his gambit – his trick. It’s the narrative he’s constructed for these battles. She writes what she ‘feels,’ and so has to be handled, reined in. Some of the boot-lickers on the floor parrot his line. But most are indifferent. It’s been unmistakeable since she was hired, Joe takes a special interest.

“He definitely wants to fuck her,” is the general consensus around the floor, “but she’s out of his league.”

Probably true, Andie thinks to herself. God, if I were just hideous like Kathleen. Fat and round-faced, stuffing my mouth with pastel-colored eight-dollar cupcakes, made by the Martha-Stewart knockoffs on Beacon Hill. No…not hideous, she thinks, correcting herself. Just… She shoots a glance at Kathleen, who notices, smiles rabidly and does a tight open-palmed wave.

Andie lifts her forearm and forces her hand open, and holds it still for a moment without looking. Yeah, girls stick together, she thinks. She flashes to the movie: Dolly Parton.. who was it. The lesbian. Funny…Tomlin. Lilly. And Jane…Fonda. “9 to 5.” They kidnap their boss and kill him or rape him or something. No, not…but chain him up, and…Whatever. Wake up. This isn’t the movie version.

Joe’s been away 10 minutes, and Rob and Kelly, as though on cue, slide their chairs toward her, each four feet to the right or left to meet Andie in the middle.

“Are retarded. And I say that with due respect to all the people who have good excuses.”

“So, can you get a witness?” asks Kelly.

“Do you suspect a cover-up?” Rob asks, suddenly shifting into a serious tone. He knows how deep the research goes for Andie. He knows Fukushima has been leaking all over the world, and he knows Joe’s nose for controversy ends at the state line. (‘He loves anything Bulger or Big Dig or pension scandals, but get him to use his mind elsewhere?’ Is the scoop on Joe.)

“Cover-up.” she says, weighing the words. “It’s not that complicated. As soon as the industry talks on record, you know they’re lying,” says Andie, dead calm, absolutely serious. “Do you want a list?”

“Aren’t they talking about a moratorium Pacific-wide?” Rob asks. “Down through Australia?”

“I read that, too.” says Kelly. “It’s been the north-west Pacific for two years. Korea has been importing fish from the Atlantic –”

“Which is ‘fished out,’ says Rob. Or, that’s what they’re calling it. ‘Fished out.’ The whole ocean.”

Andie shakes her head. “Nothing good. And Mr. Friend-to-Industry over there,” motioning to Joe’s office on the other side of the floor, “never met a…a go-America, oil independence energy source that he didn’t –”

“Want to fuck,” Kelly throws in. They laugh quietly and look around. Editorial is across the floor. Advertising in the middle. Secretaries toward the front. But they have to check their voices. It’s not all friendly territory. There are a couple sharpies in sales who love to interfere with stories, if they can convince Joe it will upset conservative advertisers. “Fuck the liberals,” has been Joe’s motto for some time. “They fought for the right to make jokes — so, they can take a joke. It’s the conservatives we have to worry about.”

God, he’s such an asshole, Andie thinks to herself.

Andie nods. “I’ve got a million calls to make.”

They both give her an affirming look. Kelly pats her shoulder. They scoot their rolling chairs back to their thirds of the long desk. Across the office, through his window, Joe takes note.

Andie gets back to her screen. Questions: What is happening in Arizona. Why is the town closed. How many people have died. Is it in the water. Which way does the wind blow?

They’re calling it class 6. Six out of seven. I don’t believe it. Why are they evacuating? How big was the explosion? Was it hydrogen? Hydrogen can come off Zirconium – the coating on the rods. Was it a total meltdown?

She goes to Alternet, to Drudge, to Rockwell. Normal stuff. “Nuclear is dangerous.” Check. I know, she thinks, but I can’t tell people that, not plainly.

“Nuclear is safe, but the old reactors are dangerous.” Bullshit. New or old, it’s the same splitting atom.

“Experts are debating whether the explosion was caused by a meltdown.” Again, bullshit. Fukushima had three meltdowns. It had a total collapse of a fuel building three years after the disaster. The radiation spray has made outdoor living on the west coast “unadvisable,” during rainstorms, according to the National Weather Service. FEMA provides boron for anyone west of the Rockies. Pacific Salmon are considered endangered species and are unfishable. Industries have tanked, nose-down into the bottom of a cesium-stabbed ocean.

Debating, she thinks. It was only a matter of time. The country has 100 working reactors, 80,000 tons of spent fuel – that’s on the record. And God knows what else. Perchlorate factories, old Grumman and Boeing death-machine plants. Millions of barrels of industrial pus littering barricaded fields, plains and mountain-tops…

And…I’ve got to get a ‘source.’ she thinks. Because the truth is too true for print.

Five hours later, she is reading and typing in a kind of defeated slump at her desk. Five hours of neck strain, phone calls and 40 emails to try to get someone on record.

The office is quiet and half dark. Empty except for Sid in ads and Mike and John in layout. She feels a presence behind her. She spins her shoulders and head – it’s Joe.

He’s pursing his lips, smirking a bit. Trying to smile, she thinks.

“Hey,” she says, turning back to her work, trying to get him to get to it and not linger.

“Hey.” He breathes heavily, as though he’s going to impart some important piece of information.

That’s why I’m so hard on you, she says in her head.

And I don’t want to see you do less than your best, she says in her head.

“And I want your work to stand up to all scrutiny.” he says.

“All scrutiny?” She asks, knowing she’s taking the bait. “Joe, it’ll stand up to scrutiny. But that’s not what I think you’re worried about.”

“Oh?” says Joe, ready to deflect. But he baits her, “So what am I worried about?”

She pauses and finds the shortest way to say it. “Is General Electric an advertiser?”

“Is General… oh, no. You’re not using that old… Andie.” he says. “Andie, Andie, Andie. We can say what we want about this story without worrying about GE. I just want to make sure we have grounds to say it, before we kick an advertiser in the gonads.”

He nods his head in a kind of ’till tomorrow’ gesture, and walks away.

Shit, she thinks. He almost just agreed with me.

I must be onto something.

This is Story 6 in 15×15. A story written and edited in one to two hours with no major revisions.

Liam Scheff is author of Official Stories, The Geneticals, and co-author of Summer of ’74, and its teaser comic – all available on Amazon and/or Kindle.