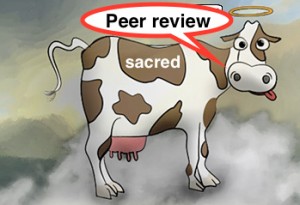 “Government science exists because it is a fine weapon to use, in order to force an agenda of control over the population. We aren’t talking about knowledge here. Knowledge is irrelevant. What counts is: ‘How can we fabricate something that looks like the truth?’ I keep pointing this out: we’re dealing with reality builders. In this case, they make their roads and fences out of data, and they massage and invent the data out of thin air to suit their purposes. After all, they also invent money out of thin air.” (The Underground, Jon Rappoport)

Introduction: Since 1987, one of my goals as a reporter has been to educate the public about false science.

Between then and now, I have found that, with remarkably few exceptions, mainstream reporters are studiously indifferent to false science.

They shy away from it. They pretend “it couldn’t be.” They refuse to consider facts. They and their editors parrot “the experts.”

Official science has a stranglehold on major media. It has the force of a State religion. When you stop and think about it, official science is, in a significant sense, a holy church. Therefore, it is no surprise that the church’s spokespeople would wield power over major information outlets.

These prelates invent, guard, and dispense “what is known.” That was precisely the role of the Roman Church in times past. And those professionals within the modern Church of Science are severely punished when they leave the fold and accuse their former masters of lies and crimes. They are blackballed, discredited, and stripped of their licenses. At the very least.

The government, the press, the mega-corporations, the prestigious foundations, the academic institutions, the “humanitarian” organizations say:

“Here are the genes. This is what they do. This is how they can be changed and substituted and manipulated. These are the outcomes.”

“These are the data and the statistics. They are correct. There can be no argument about them.”

“This is the path. It is governed by truth which our science reveals. Walk the path. We will inform you when you stray. We will report new improvements.”

“This is the end. You can go no farther. You must give up the ghost. We will remember you.”

We are now witnessing the acceleration of Official Science. Of course, that term is an internal contradiction. But the State shrugs and moves forward.

The notion that the State can put its seal on favored science, enforce it, and punish its competitors, is anathema to a free society.

For example: declaring that psychiatrists can appear in court as expert witnesses, when none of the so-called mental disorders listed in the psychiatric literature are diagnosed by laboratory tests.

For example: stating that vaccination is mandatory, in order to protect the vaccinated (who are supposed to be immune) from the unvaccinated. An absurdity on its face.

For example: announcing that the science of climate change is “settled,” when there are, in fact, huge numbers of researchers who disagree. —And then, drafting legislation and issuing executive orders based on the decidedly unsettled science.

For example: officially approving the release and sale of medical drugs (“safe and effective”) which go on to kill, at a conservative estimate, 100,000 Americans every year. And then refusing to investigate or punish the purveyors of these drug approvals (the FDA).

For example: permitting the widespread use of genetically modified food crops, based on no long-term studies of their impact on human health. And then, arbitrarily announcing that the herbicide, Roundup, for which many of these crops are specifically designed, is non-toxic.

For example: declaring and promoting the existence of various epidemics, when the viruses purportedly causing them are not proven to exist and/or not proven to cause human illness (Ebola, SARS, West Nile, Swine Flu, etc.)

A few of you reading this have been with me since 1988, when I published my first book, AIDS INC., Scandal of the Century. Among other conclusions, I pointed out that HIV had never been shown to cause human illness; the front-line drug given to AIDS patients, AZT, was overwhelmingly toxic; and what was being called AIDS was actually a diverse number immune-suppressing conditions.

Others of you have found my work more recently. I always return to the subject of false science, because it is the most powerful long-term instrument for repression, political control, and destruction of human life.

As I’ve stated on many occasions, medical science is ideal for mounting and launching covert ops aimed at populations—because it appears to be politically neutral, without any allegiance to State interests.

Unfortunately, medical science, on many fronts, has been hijacked and taken over. The profit motive is one objective, but beyond that, there is a more embracing goal:

On the issue of vaccines, I’ve written much about their dangers and ineffectiveness. But also consider this: the push for mandatory vaccination goes a long way toward creating a herd effect—which is really a social construction.

In other words, parents are propagandized to think of themselves a kind of synthetic artificial “community.”

“Here we are. We are the fathers and mothers. We must all protect our children against the outliers, the rebels, the defectors, the crazy ones who refuse to vaccinate their own children. We are all in this together. They are the threat. The enemy. We are good. We know the truth. They are evil.”

This “community of the willing” are dedicated to what the government tells them. They are crusaders imbued with group-think. They run around promoting “safety and protection.” This group consciousness is entirely an artifact, propelled by “official science.”

The crusaders are, in effect, agents of the State.

They are created by the State.

They live in an absurd Twilight Zone where fear of germs (the tiny invisible terrorists) demands coercive action against the individuals who see through the whole illusion.

This is what official science can achieve. This is how it can enlist obedient foot soldiers and spies who don’t have the faintest idea about how they’re being used.

This is a variant on Orwell’s 1984. The citizens are owned by the all-embracing State, but they aren’t even aware of it.

One of my favorite examples of double-think or reverse-think is the antibody test. It is given to diagnosis diseases. Antibodies are immune-system scouts sent out to identify germ-intruders, which can then be wiped out by other immune-system troops.

Prior to 1985, the prevailing view of a positive test was: the patient is doing well; his body detected the germ and dispensed with it. After 1985, the view was suddenly: this is bad news; the patient is sick or he is on the verge of getting sick; he has the germ in his body; it does harm.

Within the medical community, no one (with very few exceptions) raised hell over this massive switch. It was accepted. It was actually good for business. Now, many more people could be labeled “needs treatment,” whereas before, they would have been labeled “healthy.”

While I was writing my first book, AIDS INC., in 1987-8, I wrote the FDA asking about a possible AIDS vaccine. I was told the following: every person given such a vaccine would, of course, produce antibodies against HIV. That is the whole purpose of a vaccine: to produce antibodies.

However, I was informed, patients receiving this vaccine would be given a letter to carry with them, in case they were ever tested for HIV and came up positive. The letter would explain that the antibodies causing the positive test were the result of the vaccine, not the result of “natural” action inside the patient’s body.

In other words, the very same antibodies were either protective against AIDS (good) or indicative of deadly disease (bad).

This was the contradictory and ridiculous and extraordinary pronouncement of official science.

It carries over into every disease for which an antibody test is administered. If a vaccine against disease X is given, it delivers immunity, because it produces antibodies. But if a diagnostic test for disease X reveals the presence of the same antibodies, this is taken a sign of illness.

Extrapolated to a more general level, the Word is: synthetic medical treatment is good; the action of the body to heal itself is incompetent.

This is a type of superstition that would astonish even the most “primitive” societies.

It no longer astonishes me. I see it everywhere in official science.

From the medical establishment’s point of view, being alive is a medical condition.

We are now living in a society where an incurable itch to meddle everywhere and at all times is the standard.

A new definition of Reality emerges: “that which needs to be monitored and surveilled.”