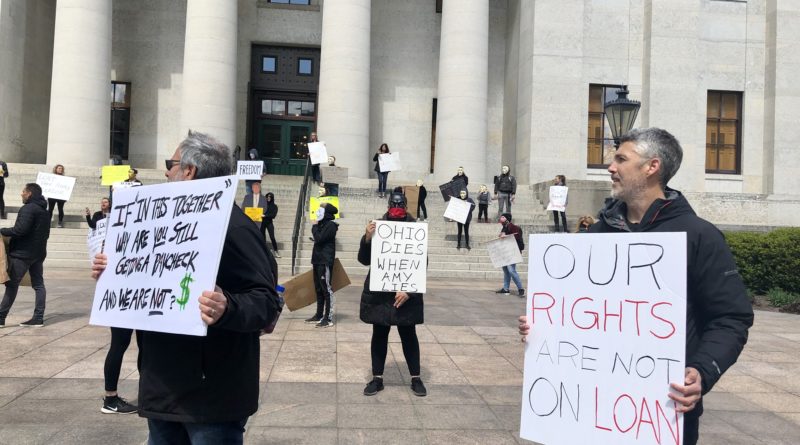 “The people never give up their liberties but under some delusion.” — Edmund Burke, 1784.

The Chinese regime broke the ice by imprisoning 50 million people at the start of Operation Fake Pandemic. It sent a signal to the fascist CDC and World Health Organization that they could command huge imprisonments in other countries.

Well now, in America, a different kind of ice is being broken. —The resistance against the imprisonment, against the economic devastation, against the loss of freedom.

The governors of American states are behaving like the governors of the original colonies, taking their orders from a foreign power. In this case, the power is the CDC, the World Health Organization, and by extension, the United Nations, of which the WHO is a branch.

The UN, in particular, has stated in a thousand different ways that it wants the US, and every nation, to bow to a world authority. The current strategy is medical. If climate change didn’t do the trick, try another angle.

“This will teach the Americans a lesson.”

Americans may have their own lesson to teach.

The last time I looked, Bill Gates hadn’t bought off the whole country yet.

The Telegraph, UK, April 16: “Release us!’ Anti-lockdown protests break out across America, with some featuring flags and guns”

“In Kentucky the protesters chanted ‘we want to work’ and ‘facts over fear’. In Michigan some carried rifles with their US flags as the snow fell.”

“There were Trump caps visible among the crowds gathered in Ohio, while in North Carolina a woman led away by the police shouted ‘God Bless America’.”

“Right across the United States, a country now in its second month of tight restrictions to stem the spread of Covid-19, small but vocal protests have begun to spring up.”

“These anti-quarantine gatherings, emerging amid unprecedented surges in unemployment, are happening at state capitals and often targeted at governors.”

“The common thread is a demand for orders keeping people at home and businesses shut to be loosened, thereby helping a US economy choked off by the lockdowns.”

“Many of the signs and shouts accuse the state governments of overreach – a clue, perhaps, as to why such protests are being seen in America but not yet in Britain.”

“Suspicion of big government is deeply rooted in a country born from revolution and a point of pride on the Right, where many of the protests appear to be emanating from.”

“It may also reflect frustration voiced by Donald Trump, who has made no secret of his desire to lift restrictions and at times bemoaned scientific advisers pushing social distancing rules.”

“On Wednesday the US president was set to share with governors his administration’s guidance on how to open back up society after the ‘Great Lockdown’.”

“In recent days Mr Trump has stuck an upbeat tone, talking of ‘light at the end of the tunnel’ and saying on Wednesday that America had passed its peak of Covid-19 cases.”

“One of the biggest protests occurred in Michigan, whose governor Gretchen Whitmer is a rising star in the Democratic Party and has clashed with Mr Trump in recent weeks.”

“Thousands of people descended on the Michigan Capitol in Lansing on Wednesday, many sitting in cars and honking horns in what was dubbed ‘Operation Gridlock’.”

“One poster read ‘hands off our citizens!!!’. Another declared ‘I prefer dangerous freedom over peaceful slavery’. A third just had two words written: ‘Release us!’”

“Some of those present said Ms Whitmer’s stay-at-home order was too restrictive, stifling the economy and unfairly undermining personal liberty.”

“[A] woman who spent some of the protest waving the stars and stripes from the back of a pick-up truck had been impacted by job losses.”

“’Our community is struggling. My husband is on unemployment [benefits] for the first time in our life,’ she said. ‘We want to go back to work’.”

“Michigan has been one of the US states hardest hit by the financial deep-freeze caused by the coronavirus pandemic, with a quarter of the workforce filing for unemployment.”

“Right across America record job losses are being recorded. On Thursday it was announced 5.2 million people filed for unemployment benefits last week.”

“That takes the four-week total up to 22 million, or around one in eight people working a month ago. It is unlike anything seen since the Great Depression in the 1930s.”

“In Kentucky, another Democratic governor, Andy Beshear, was the target of criticism as around 100 protesters voiced their disapproval at the state Capitol in Frankfort.”

“They chanted ‘open up Kentucky’ and ‘you’re not a king, we won’t kiss your ring’, sometimes through megaphones, as the governor tried to brief the press on the outbreak…”

—For one of their International Youth days, the United Nations cooked up the slogan, “Change Our World.” Through their World Health Organization, they’re trying all right. But the phrase is so weak. Maybe I can help them out.

—Workers of the world, unite. You have nothing to lose but your chains. Remember that one? Doesn’t really gain traction when the first step is firing all the workers from their jobs. How about one people, one country, one leader, Hitler’s contribution. No thanks. There’s always Stalin’s gem: a single death is a tragedy, a million deaths is a statistic. No, let’s leave Joe and Mao and Adolf in the dustbin of lunatics. So what else?

It ripples. It has waves. Far reaching implications.

Those protestors in Michigan and Kentucky and Ohio and North Carolina. They’re peculiar. They’re not behaving like robots wearing medical masks. They’re acting like… live humans. Humans who are free.