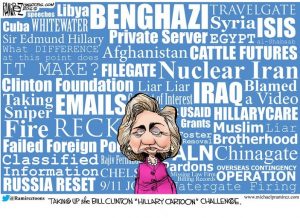 The Hillary email scandal and the Clinton Foundation scandal have been slithering, segment by segment, into public view.

And now we have “pay to play.”

The latest revelation, from the Associated Press:

“More than half the people outside the government who met with Hillary Clinton while she was secretary of state gave money — either personally or through companies or groups — to the Clinton Foundation. It’s an extraordinary proportion…Combined, the 85 donors contributed as much as $156 million [to the Foundation].”

The implication is clear. “You want a favor from the State Department? Pay the Clinton Foundation.”

The National Review gives us the tip of the iceberg:

But let’s put all this in the right perspective. Let’s reverse engineer this. The media has it backwards.

Heading up the State Department didn’t incidentally afford Hillary the opportunity to funnel cash into the Clinton Foundation, in return for granting favors to donors. No.

Head of the State Department was her side job. She was really an officer of the Foundation. And as such, she picked out a plum position that would allow her to expand the Foundation’s coffers: she became Secretary of State.

It would be like the son of a mafia crime boss landing a slot as a judge, so he could rule in favor of his father’s mob associates in court. The judgeship was just an angle, a way of serving the family. The family comes first.

Yes, as Secretary of State Hillary could remain in the public eye—an essential factor for her later run for President. And she could also exercise her passion for making war and wreaking havoc: Libya is a prime illustration. But behind it all, she has been Hillary Clinton of the Clinton Foundation.

Right now, as the latest chapter in the Clinton Foundation scandal is exploding, Bill, her husband, is promising to tighten Foundation rules for accepting donations. He’s presenting a typical mafia ploy: “The Family is getting out of the rackets. We’re going completely legit.”

Sure they are. Bill and Hillary have an itch that can never be scratched. They have to run a racket. They have to pile up money through cons and schemes and payoffs. That will never change.

Hillary convincing Obama to give her the Secretary of State job was a champagne moment for the Clintons. The husband and wife team were in clover. The State Department would become their satellite office for the Foundation, and as such, it would go global and suck in gobs of cash from California to Saudi Arabia.

Annual huddle of the Foundation: “Well, folks, our marketing arm, also known as the State Department, has exceeded all expectations. Everything we’ve been working for, all these years, is coming to fruition. It’s called free money, and we’ve got it.”

What Hillary has done is typical for any clandestine agent: she went undercover; her cover story was, she was Secretary of State; in that role, she achieved hidden ulterior objectives.

Except, as usual, she and her husband did sloppy work. They failed to conceal their operation properly. They wandered off the reservation.

What’s next? Well, how about the Clinton Global Initiative? What might be discovered during a deep probe of that charity? Now we’re talking about real money: over 2000 projects and 69 billion dollars raised (Reuters, 9/22/11). Who diverted and kept how much of that gargantuan sum? Who used money from that vault to extract favors?

Doug Band, the long-time Clinton associate who pulled off this fund-raising feat, was also, according to reports, the man who convinced Obama to give Hillary the job of Secretary of State. If true, one wonders if Band made the President an offer that was hard to refuse: a financial boon after the Oval Office faded in the rear-view mirror.

Every President needs a nest egg, something to fall back on after rendering public service to the nation.

Why shouldn’t the Clintons throw a few large bags of cash out of a plane winging over Hawaii, as the Chosen One and his family arrive to build their new home on a hill?