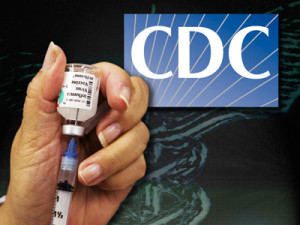 —Understand the implications of new CDC rules, if you want to know where the medical dictatorship is heading.

Let me paint a scenario:

You live in a polluted city, so you have a low-level cough. On your flight to another state, the cough becomes worse because the air in the plane cabin is foul. Unknown to you, a passenger complains to a flight attendant. The passenger is a typical meddler. When you arrive at your destination, a health-agency employee is waiting at the gate for you. He apprehends you and takes you to a room, to decide whether you have a communicable disease. His first standard question—are you up to date on your vaccinations? And things go downhill from there…

It can get worse: the same story as above, except when the detained passenger is injected with a load of vaccines, he then becomes very ill, or even dies. Using plane passenger lists, health authorities search out and detain everyone who was on the flight, claiming the deceased passenger died as a result of a disease—not the vaccinations—and now all the passengers will be detained and “treated,” because they are “infected.”

The CDC is doubling down.

The agency is on the verge of expanding its power to detain and force medical treatment on anyone.

The new proposed CDC regulations are contained in the Federal Register dated August 15, 2016, under the heading, “Control of Communicable Diseases—Notice of Proposed Rulemaking.”

Reading between the lines, the stark message is: any person in the US suspected of carrying a serious communicable disease, even if his disease is in an “invisible” stage, can be detained, isolated, quarantined, and medically treated (e.g., forcibly vaccinated). Upon conditional release, the person can be monitored, and this can involve wearing electronic tracking devices.

Those are the broad strokes of the new policy, and, obviously, they’re broad enough to cover anyone.

Tortured linguistic gibberish from the CDC guarantees that any American can be assessed with a disease, justifying arrest. Force yourself to wade through the next paragraph, and you’ll get a feel for the lunatic bureaucratic doublespeak, and the loopholes through which the government can drive a truck:

Is that clear as mud? The “qualifying stage” of a disease? Translation: “we can arrest you whenever we want to, and we can say you have a disease.”

Here’s more garble from the CDC. Notice the absurd Orwellian definition of “agreement”:

“…HHS/CDC believes that it is important to define for the public what is meant by the term ‘apprehension.’ Apprehension means the temporary taking into custody of an individual or group for purposes of determining whether quarantine, isolation, or conditional release is warranted…When an apprehension occurs, the individual is not free to leave or discontinue his/her discussion with an HHS/CDC public health or quarantine officer….In certain circumstances, the individual may remain apprehended pending confirmation that he or she is not infected or not reasonably believed to be infected with a quarantinable communicable disease…Generally, however, HHS/CDC does not expect that the typical public health apprehension will last longer than 72 hours…HHS/CDC is proposing a definition for ‘agreement’ which refers to an agreement entered into between the CDC and an individual expressing agreement between the parties that the individual will observe public health measures authorized under this part, as the CDC considers reasonably necessary to protect the public’s health, including quarantine, isolation, conditional release, medical examination, hospitalization, vaccination, and treatment.”

Translation: Any person can be arrested, held, and vaccinated, without his consent. That’s what “agreement” means.

And finally: “HHS/CDC has proposed a definition for ‘electronic or internet-based monitoring’ that defines this term as referring to mechanisms or technologies allowing for the temporary public health supervision of an individual under conditional release, including electronic mail, SMS texts, video conference or webcam technologies, integrated voice-response systems, entry of information into a web-based forum, wearable tracking technologies, and other mechanisms or technologies as determined by the Director or supervising health authority.”

Translation: Once released from custody, an individual can be monitored electronically, including by the attachment of tracking devices.

To prepare the public for this version of fascism, the CDC has been promoting a whole series of phony epidemics over decades, using scare tactics. SARS, MERS, bird flu, Swine Flu, West Nile, Ebola, Zika—they’ve all been duds. The CDC has only cared about one thing in this campaign: softening up the public to accept a medical police state.

And as this new document indicates, the CDC is turning the screw several times in that direction.

In 1987, I began warning the public that medical ops are the most dangerous, because they appear to have no political partisan bias. They’re promoted on the basis of “we’re the healers and we only want to protect you.”

Well, what I’ve discussed above is ultimately the kind of protection they’re talking about at the CDC.

And you can bet that a detained adult who hasn’t taken his recommended slew of vaccines would be looked upon as an outlier, a person whose “medical condition” could be leveraged into multiple shots in the arm, before being dumped back out into the street.

If you think I’m exaggerating what the CDC would actually do to you or anyone else, keep two things in mind. One, this is a step-by-step long-term op. A nibble on your freedom today, another nibble tomorrow. And then, a few years from now, you’ll look back and see how far they’ve come.

And two, as an illustration, how many people believed, ten years ago, that the state of California would push through a bill (SB277) mandating the full CDC toxic load of vaccines for every child attending public or private school? How many people believed the state would wipe out the religious and personal-belief exemptions, or relegate the concept of informed consent to the dustbin of history?

The enemies of freedom are writing the future at this moment and erasing the past.