The following is an exclusive excerpt from the new book “Official Stories” by Liam Scheff, from Chapter 5: Vaccination – The Religious Science.

The Official Story: Vaccination, injecting viruses into people, especially small children, prevents future infection and is therefore good for you. It began with Louis Pasteur, who devised germ theory. Then Edward Jenner developed a vaccine against smallpox. Jonas Salk’s vaccine stopped Polio in the 1950s. We use vaccines today to fight latent “slow viruses” like HPV which, officials say, can cause cancer in women, eventually.

The Lone Gunman: Viruses. But this time there’s a counter-attack and it’s equally powerful – the syringe full of specially-prepared viruses.

The Magic Bullet: Whatever is in those syringes; it stopped polio, it’ll stop HPV and the bird, pig and every other flu too.

Scratch 1: Vaccination comes from the word “vacca.” We could call it cow-injection, to be true to history, because, and we’re never really told this, but the vaccine that made it all famous – smallpox – came from the sores on the underbellies and legs of cows and horses. Pus and blood were scraped off, put on the ends of small, sharp pronged forks or lancets and jabbed into people’s arms. Yes, “vacca” means “cow.” Does that surprise you? Do we generally think that animal blood and pus is good thing to put into our bodies? Probably not, but we’ll get into that in a minute.  Vaccines are regarded as a nearly magical process, like a totem or a crucible, a station of the cross in the Western world; it has replaced baptism as a holy right. Those who are opposed are mistrusted and feared, almost as witches; certainly as troubled heretics. But no one ever asks the question:

What Is In A Vaccine?

Scratch 2: Vaccines are not conjured at Hogwarts by honest wizards. Willy Wonka doesn’t brew them in his chocolate factory. They are not magical and there is a reason, or many, why some people oppose them so strongly. Vaccines are toxic, by their very nature.

The liquid in the syringe is filled with very small pieces of…well, a lot of things. These materials come from laboratory dishes where putative viruses are grown. But nothing biological can be grown, except in a “medium” or substrate. That is, it takes living tissue to grow living microscopic entities. So, what tissues are vaccines grown in, or really, culled from?

The first substrates were a variety of animal body parts, including spines and brains; rabbits were often used. Sometimes it was pus and blood from a sick animal. Then it was monkey kidneys and testicles; that’s what the putative polio virus was grown in. Of course, monkey cells contain monkey proteins, viruses, bacteria, mycoplasmas and toxins. It is not possible to filter out one microscopic particle, from a sea of similarly-sized or smaller particles. These particles, proteins, viruses and cellular debris have been and are being injected into millions of people, in the name of stopping polio – and every other disease for which there is a vaccine.

Hamster ovaries, washed sheep blood, dog kidney cells and here’s a favorite with the Christian crowd – aborted human fetal tissue; these are newer substrates. These cells are cultured, fed, stimulated and made to replicate so as to produce…well, that’s what this chapter is about and we’re almost there.

In addition to the living tissue, vaccines have added to them a series of metals and preservatives, as well as chemical agents sent to inflame and agitate your cells. Mercury is one of the longest-used metals in vaccines. Formaldehyde has made it into countless batches. Formaldehyde is used to embalm dead people – to keep them from rotting. Is that good for children? No, it’s a toxic poison. But there it goes, into the blood.

Squalene is one of the most famous adjuvants for its starring role in Gulf War Illness. Its job is to agitate your muscles, blood vessels, cells and tissue into an inflamed state. Vaccine manufacturers actively seek this inflammatory response. They feel it helps their vaccine work. But it can also bring on real illness: Pain, nausea, cramps, fainting, tremors, seizures and a long list of neurological responses. Some-times vaccines cause death; sometimes instantly. Yes, that has happened too.

Vaccine proponents will tell you that the 30,000 adverse events reported annually on the government’s VAERS self-reporting system for vaccine side effects are worth it. It doesn’t seem to bother them that even the government agrees that VAERS captures about 1% of the total number of toxic events due to vaccination. It’s like a religion. There are the vaccine true-believers – and their generally ridiculed opponents.

If you can believe it, I was agnostic for a long time about vaccines. Understanding vaccination came late in my studies. I didn’t like them, but, I wasn’t sure. Maybe they helped. After all, there had been polio and now there isn’t. Smallpox has gone away. I couldn’t discount vaccination entirely. 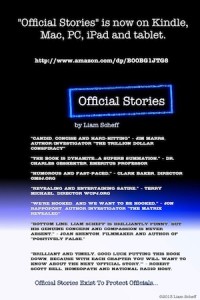 I was three or four years old. I was in a doctor’s office. I saw a needle coming for me – it was going to be put into me. INTO. I knew with all my being that this was insane. Wrong. WRONG. Not going to happen. Large hands held my small limbs and forced the needle and fluid into me, sending a hot swelling pressure into my arm.

I had a lot of strep throats as a kid. I had a number of very bad fevers. I felt awful, a lot. The next time I went, I remember being older by a few years. I held still; I looked away; I held my breath. “That’s a brave young man,” they said. I continued to have a lot of flus and strep. But, I had a terrible diet.

I stopped getting stuck with needles in my…I can’t quite recall. Early teens? After childhood, I avoided doctors and all medical procedures. Maybe it’s that I come from a family of doctors. It turns you off to it. On the inside of a group of medical men they’ll tell you, “Oh, it’s just a flu, tough it out.” So you do. Decades on, I don’t get sick the way I used to, but my diet is entirely different. I also haven’t been injected with anything for decades.

So I was agnostic. I did not know. I had to read and study, starting with polio 6 or 7 years ago, then HPV and then reaching back to the beginning, Pasteur and Jenner. What I learned was a hidden history. What I can do for you is to share it.

Vaccination, The Other History

People have always gotten sick and people have always died. That seems to be part of the deal here on Earth, for as long as anyone can remember. In order to deal with this reality, some ancient cultures, including the Chinese and Indian, devised complex medical systems involving categorization of energy types, effects of food and herbs and interaction among the organ systems. They had great success with them for thousands of years.

One method of disease prevention was to take pus from people and animals who had the “pox” or pustule-forming diseases, remove it from the pustules and dry it in the sun. (Sunlight and fresh air – the ultimate disinfectants). That dried material would then be crumbled or ground into a powder and blown (whoosh!) up your nose and sinuses, if you’d never had the disease and especially if you were young. By this method of introducing dried, sterilized powder from a sick creature into the nasal passages, the recipient would receive a benign exposure to an otherwise toxic substance. Some cultures would prick your skin with this dried, sterilized substance.

Let’s make a check here: Breathing something into your nasal passage is very different than opening a wound in your flesh and pouring in the dripping wet pus and blood drawn from the sick animal. And pricking skin with dried, sterile material is different than injecting diseased animal remains deep into your muscle. Without reading another word, you can begin to understand the problem with the Western system of vaccination.