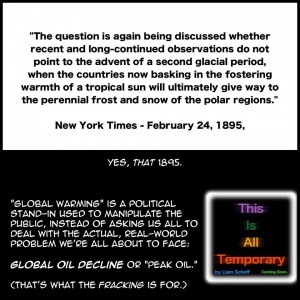 by Liam Scheff for the Robert Scott Bell Show.

The future of energy is not in your hands – but it should be! On today’s show (3/27/2015), I’ll tell you why planting food trees in your town is a better bet than waiting for big government plans for “next generation energy.”

I’m digging into the oil patch and reporting on the worldwide declines in the energy markets in preparation for my new book and speaking/garden-activist tour. The book’s working title is “This is All Temporary,” a reminder to snap out of iPod-land and to value food growing and local resilience as more important than George Clooney’s fake marriage troubles and Paparazzi-friendly wedding pictures.

But wait – did I say “oil declines?” Aren’t gas prices lower than ever? Why, yes they are! So, why worry? (Because these prices are more short-term than the attention span of a school kid on Cocoa Puffs.)

Due to the instant-gratification market mentality of Wall Street, we’ve been flooded by expensive fracking oil — sold on the cheap. The stuff which cost a hundred dollars per barrel to pull out of the ground is being sold at significant losses to compete with oil supplies coming from cheaper, traditional, non-fracked wells from other countries. Yes, we’re losing in order to “be number one.” Go figure…

The major revenue loss has caused fracking to come to an abrupt slowdown in the U.S., dropping 75,000+ jobs over two months, and pulling up over 600 drills [LINK]. Not that I mourn a slowdown in fracking – but the reality is, fracking was the only thing keeping U.S. oil production out of the dog house.

Consumers balked at $100+ per barrel oil, ie, four to five dollar per gallon gas at the pump a few years ago, and the “economy” – that fictional concept that all things must incessantly grow (like a cancer) to be successful – ratcheted down. Which, for some reason, is “bad.”

Yes, it’s “bad” to actually inhabit the space you live in rather than “living” vicariously through cable TV! It’s “bad” to stop spending hundreds per week on shipped-in Monsanto-land “phood,” and to instead grow food locally! And it’s awful to give up your single-passenger car and instead share rides! And community interests! Bad, I tell you, bad!

So, what’s the solution? Will we conserve? Thereby extending our oil allotment for a century, rather than decades? No! Why would we ever bother thinking prudently about something like energy!?

So, what’s next? How about…”renewables?” We’ve only been ignoring those for a century! Now let’s start to pay attention! And who’s in the lead? Will it be solar? Wind? Recycling?

With a few states decreasing coal burning (a little) and others increasing both solar and wind, greenies can give a slight cheer – but the small volumes of electricity they’re generating won’t save the oil and growth-dependent economy of the United States from a severe oil downslope. LINK

Meanwhile, China sees the writing on the oil wall and is doubling down on wind, solar and…NUKES! Yes, nuclear power – which the mainstream greenies see as “GREEN!” for “emitting less CO2.” But is nuclear power “Green?” Is it even “CO2 friendly?” Not hardly! We’ll explore why on the show – but have a look at the standard industry selling point for why to build a nuke plant:

• 400,000 cubic yards of concrete—as much concrete as was used to build the Pentagon
• 66,000 tons of steel—the same amount used to build the Empire State Building
• 44 miles of piping
• 300 miles of electric wiring—enough to stretch from Boston to Philadelphia
• 130,000 electrical components.” NEI.org LINK

Each plant a Pentagon, Empire State Building, 44 miles of pipes, 300 of wires and 130,000 bits of electronics. If you’re worried about CO2, you can be assured that heating limestone for concrete, mining iron and nickel and bending a sky-scraper’s worth of steel, plus the hundreds of miles of electrical wire and machined parts – all require a hell of a lot of “CO2-emitting fossil fuels” to be burned, baby burned. (Well, maybe we can rely on hydroelectric dams! What’s the worst that could happen?)

But maybe “new nuclear” will come to the rescue? Not hardly, if years of hold-ups and set-backs are to be accounted for.

Speaking of CO2, China is exporting its steel-making to other countries, like South Africa and Thailand, to “comply” with “CO2 caps.” So what difference does it make? Hey Al! I thought Carbon was “sewage” and “poison?” How did the Gore-texed Daily Show army convince the world that this “deadly poison” could be “traded” to make the problem go away?

In the U.S., the future of nuclear is dour – because it’s so damned expensive compared with EVERYTHING else. Here, some old nuke plants are having their lifespans extended with “replacement parts,” (because radiation even kills steel), while others are being shut down early (for the same reason). But China is building nuclear reactors all over their massive country – 30 new ones by 2020. (But, we’ll see.) In the meantime, they’re also exporting them: They’ve already built two (and counting) reactors in Chashma, and have six more slated for Karachi, a city of 20 million in an earthquake zone in Pakistan. From Oilprice.com:

“Still, for a city that is no stranger to cyclones or earthquakes, a natural disaster could spark a nuclear catastrophe. Any sort of emergency situation would be a nightmare because of the power plant’s proximity to the megalopolis of Karachi. With only a few dozen fire trucks on hand, a handful of public hospitals, the capacity of the city to respond to such a situation is uncertain. “You couldn’t even dream of evacuating Karachi,” Pakistani nuclear physicist Pervez Hoodbhoy told the Post. “The minute an alarm was sounded, everything would be choked up. There would be murder and mayhem because people would be trying to flee.” LINK * 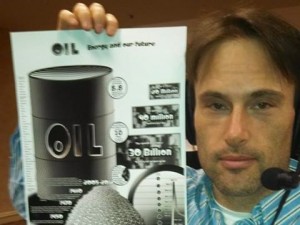 What’s a concerned citizen to do? Here’s my strategy: Start planting food, fruit and nut trees, shrubs and bushes – as household and neighborhood projects. Don’t wait for the government to apologize for getting it all wrong. And don’t leave a neighbor behind…

Liam Scheff is author of Official Stories, a reverse textbook to all the fibs you were taught in school; his current project and next book is “This is all temporary,” all about the collapse we’re just beginning to soak up, coast to coast.

[Correction – on the RSB show, I was in error on the number of firetrucks in Karachi – I said there were “a dozen firetrucks,” misreading the line “a few dozen” in Karachi. See the excellent article (and many more) by Nick Cunningham of Oilprice.com – my new favorite web news source: LINK]