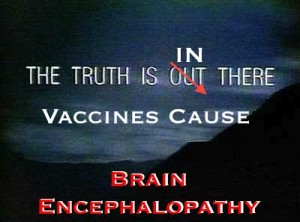 Let me start with this controversial statement: The worst thing parents can do is obtain a diagnosis of autism for their vaccine-damaged child.

The primary fact to keep in mind is: the government must deny any link between vaccines and autism, because to admit the connection would force it to pay out gigantic sums of money to parents, under its Vaccine Injury Compensation Program (VICP).

VICP was created in 1988, through an agreement between the US government and pharmaceutical companies, to funnel all law suits for damage away from those companies, and into a bureaucratic maze of government madness, where the parents’ chances of compensation are minimal, where the deck is most assuredly stacked against them.

Once parents enter the maze, hoping to gain funds to care for their children, they are immediately confronted with a list of disorders and diseases.  This list essentially tells them:

“If your vaccine-damaged child has been diagnosed with any of the following medical conditions, you may be able to win financial support.  If not, you’re out of luck.”

Can things be any clearer than that?  A diagnosis of autism is a trap.

One: a young child receives a vaccine.

Two: he suddenly withdraws from life.

Three: a doctor makes a diagnosis of autism.

Four: the parents want to sue the company that makes the vaccine, but they can’t; they must apply to the VICP for funds to care for their child for the rest of his life.

Five: as soon as they enter the VICP system, they learn that the label “autism” is the very thing that will keep them from the funds they desperately need.

That is the long and short of it.

Forget about the fact that the parents never wanted to involve themselves with a federal government program.  They wanted to sue the vaccine maker.  They wanted a court award.  But they were barred from suing.

At this point, you might say, “But if their child really does have autism and it was obviously caused by a vaccine, then they should be able to find justice somehow.”

Because, you see, the label of “autism,” the very label that keeps parents from getting help for their children, is an arbitrary word that means nothing.

A deviously designed word that means nothing is keeping parents in a lifelong state of desperation, as they go bankrupt trying to care for their vaccine-damaged child.

We begin here: all 297 official mental disorders, listed in the (DSM) publication of the American Psychiatric Association, are defined and approved by committees of psychiatrists.  Whether it is schizophrenia or autism or ADHD or clinical depression or bipolar disease, the definitions consist wholly of described behaviors.  That’s all.

Psychiatrists will tell you these symptomatic behaviors are signs of underlying chemical imbalances or genetic aberrations, but they have no tests to back up this assertion.  Therefore, all they are left with are the behaviors, their own menu-like clusters of those behaviors, and the “mental disorder” label they place on each cluster.

If they had more, if they had blood tests or brain scans or genetic assays, they would publish those tests and claim they are definitive for diagnoses of mental disorders.  But they don’t.

Here is an exchange between a respected psychiatrist and a PBS interviewer, which occurred during a Frontline report titled, “Does ADHD Exist?”

PBS FRONTLINE INTERVIEWER: Skeptics say that there’s no biological marker—that it [ADHD] is the one condition out there where there is no blood test, and that no one knows what causes it.

BARKLEY (Dr. Russell Barkley, professor of psychiatry and neurology at the University of Massachusetts Medical Center): That’s tremendously naïve, and it shows a great deal of illiteracy about science and about the mental health professions. A disorder doesn’t have to have a blood test to be valid. If that were the case, all mental disorders would be invalid…There is no lab test for any mental disorder right now in our science. That doesn’t make them invalid. [Emphasis added]

Yes, it actually DOES make all those disorders invalid, unless “science” suddenly means “the opinions of psychiatrists sitting in a room, collecting together various human behaviors, and labeling them.”

Here is a link to the official psychiatric definition of autism disorder.  It’s worth reading:

Despite public-relations statements issued by doctors and researchers, they have no laboratory findings to establish or confirm an autism diagnosis.

But, people say, this makes no sense, because children do, in fact, withdraw from the world, stop speaking, throw sudden tantrums.  Common sense dictates that these behaviors stem from serious neurological problems.

What could cause the behaviors listed in the official definition of autism disorder?

Vaccine injury; a toxic medical drug; a head injury; ingestion of a poison; an environmental chemical; a severe nutritional deficit; oxygen deprivation at birth; perhaps the emotional devastation accompanying the death of a parent…

There are many possible causes of the behaviors arbitrarily called autism.

However, then, why bother to say “autism?”  Why not just say vaccine injury or head injury?  Why not try to find the crucial event that brought on a specific child’s sudden and unique withdrawal from the world?

The answer should be clear.  By establishing a label like autism, medical drugs can be sold.  Studies can be funded.  An industry can be created.

Something more can be done, too.  The government can reject vaccine injury as a defining event in a child’s life, and reject the need to pay out compensation for it.

Poof.  It all goes away.  Did you catch the sleight-of-hand trick?

Let me expose it.  A child is given a vaccine.  The child goes into a massive withdrawal from life and communication.  A doctor, assessing the child’s behaviors, connects them with the official menu of behaviors labeled “autism.”  The doctor then says, “This child has autism.”

Then the parents try to obtain government compensation through the VICP, the Vaccine Injury Compensation Program.

The parents, who now have alarmingly high expenses for ongoing care of their vaccine-damaged child, go to the VICP and say, “Our child has been diagnosed with autism, and we want to collect funds for the vaccine-injury he sustained.”

The government replies, “This is impossible.  You see, we know that autism isn’t caused by vaccine injury.  We know it because many children who are diagnosed with autism have never been injured by vaccines.  Some autistic children have never had vaccines.”

Do you see what is going on here?  The parents stepped into a fatal trap.  They said “autism” and the government said “vaccine injury does not cause autism.”

You might think the parents could back up and regroup.  They could say, “We don’t care what you call it, we just know our child was severely damaged by a vaccine, and we need funds.”

But, you say, this is an evil word game.  Of course it’s a word game.  The whole notion of “autism” based on no definitive tests was a word game to begin with.

What is called autism (merely a label) is not one condition caused by one factor.  It is a loose collection of behaviors that can be caused by various traumas.

Parents say, “My child’s life was stolen away from him.  He must have autism.”

A label provides some measure of relief for the parents.  It doesn’t prove that the label actually means something.  In fact, the label can be a diversion from knowledge that would actually help the child.  Suppose, for example, after receiving the DPT vaccine, the child went into a screaming fit and then withdrew from the world.  Calling that autism tends to put the parents and the child in the medical system, where there is no definitive effective treatment.  Outside that system, there might be some hope with, say, hyperbaric oxygen treatments, or other strategies.

If all this creates a sense of outrage in you, you are not alone.

If a hundred thousand parents of children who have been devastated by vaccines traveled to the headquarters of the Vaccine Injury Compensation Program, at the Parklawn Building, 5600 Fishers Lane, Rockville, Maryland, and if they stayed there and Occupied the area, and if they had a unified position that cut through the word game and the purposeful official delusion, perhaps this criminal insanity would end.

A doctor’s diagnosis of autism most assuredly does not end the insanity.  It adds to it.

I once had a conversation with a parent whose child was vaccine-injured and then diagnosed with autism.  She spent years trying to obtain compensation from the VICP and failed.  Here is a paraphrase of how our conversation went:

“I found out my child wasn’t the point of the VICP proceeding at all.  The government’s attorney was doing everything possible to deny us compensation.  I felt I was up against a monster.”

“They denied you benefits because your son had been diagnosed with autism?”

“Yes.  They said there was no established connection between the vaccine-damage and autism, so they rejected my claim.”

“So you see that the the label ‘autism’ was the very thing they used to reject your claim.”

“You also know there is no reason to use the ‘autism’ label.  It’s an arbitrary word.”

“Do you realize that, if your doctor had diagnosed your son with a different catch-all label, you would have stood a better chance of gaining compensation?”

“So you’re telling me it was all a game, and if I could have gotten the doctor to understand that, he might have written a different diagnosis in my son’s chart, and my chances [of compensation] might have improved.”

In the world we live in, that parent has to prove her child was diagnosed with a condition that the government admits could be caused by a vaccine.

And if the doctor wrote down the word “autism,” the chances of compensation are suddenly very, very remote.  They’re zero, unless the parent was able to obtain an accompanying word like “encephalopathy.”

Finally, people will insist that researchers are getting closer to discovering the true and basic cause of autism.  This is just more arbitrary verbiage.  The “symptoms” listed as definitive for autism are just a collection of behaviors.  I could put together a list, and so could you:

“Fatigue, eye flutters, sadness, lack of desire to participate in school, loss of appetite, halting communication…”  I could give these behaviors a name, “Remoteness Syndrome,” and call it a disorder, and then I could raise a few billion dollars to search for the underlying cause…but there would be no underlying single cause, because the list was a non-starter.  It was just an arbitrary collection of behaviors.

“Autism” is nothing more than a catch-all phrase that indicates a  variety of possible unconnected neurological insults.  Each patient should be examined by a health practitioner who can really find the cause in that case. Then, perhaps, a treatment plan can be devised for that child.

Meanwhile, the government and its VICP program embroils parents and works them over and tortures them for years, and dumps most of them out on the street with no compensation.