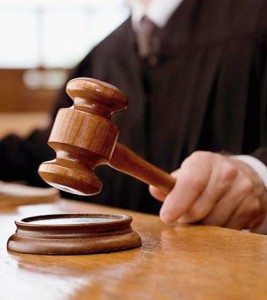 THE SCENE: COURTROOM OF THE FUTURE

A PROSECUTOR ADDRESSES THE JUDGE. THE DEFENDANT IS WAITING FOR THE VERDICT IN A JAIL CELL FAR FROM THE TRIAL.

PROSECUTOR: Your Honor, I have a document written by the defendant.

JUDGE: Why do you present it here?

PROSECUTOR: Because it reeks of ideals which the State does not support. It speaks of the individual.

JUDGE (choking on his coffee): The individual? That old tune? I thought we’d gotten rid of it. Read it to me now.

PROSECUTOR (reading): “As always, I return to the individual.

“Without him, there is no meaning to civilization or the future.

“It was once established that society and civilization existed to liberate him, to remove the shackles of the State from him, so he could pursue his own destiny. This victory was massively opposed by combines, monopolies, and cartels, who seek control over populations.

“It is now up to the individual to stake out his own territory, his own power, his own virtue.

“In doing so, he can settle on little ambitions or great ones. He can develop his mind as a seeking instrument of penetration, or he can absorb himself in shallow ideas. He can make his way along huge trails of adventure, or he can occupy himself with ordinary details of a huddled and mundane life.

“To say these choices are his is obvious. But he has to make them.

“He can imagine and envision tiny advances, or he can view great ascendance.

“He can go down with any number of small ships, or he can build a vessel for himself that will take him across an ocean of invention.

“He can discover what he already knows, or he can create new knowledge.

“He is building the reach of his own spirit, or he is living in a welfare state of mind.

“He is discovering the immortal impulses that reside beyond the language of the crowd, or he is trapping himself in the crowd.”

JUDGE: Treasonous, to say the least. The author is obviously psychotic. Where did he get such ideas?

PROSECUTOR: I do not know, sir.

JUDGE: It must have been the Russians.

PROSECUTOR: I hadn’t considered that. Yes, it must be so. Of course.

JUDGE: We’ve caught them at this before. They recruit dupes and bring them under their control. They’re trying to undermine our way of life.

PROSECUTOR: I recommend a life sentence for the defendant.

JUDGE: A life of silence in an institution. It is so ordered.

PROSECUTOR: Perhaps we could turn him.

JUDGE: Make him into a double agent? I’ll leave that to the psychiatrists. If they believe they can achieve it, they could set him adrift in our cities and let him attract others to his cause. He could help us identify enemies.

PROSECUTOR: A brilliant idea, Your Honor.

JUDGE: They were Russian spies who tried to subvert the United States at the birth of the nation. They spread vile ideas and fake news to the people.

JUDGE: Indeed. It took our leaders many years to discover the plot.

PROSECUTOR: Thank goodness we now have a strong court system.

JUDGE: The loopholes have been eliminated. Next case!