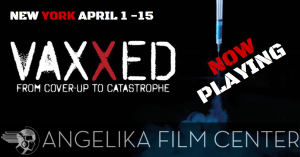 Whatever happens in a doctor’s office must be good, right?

Don’t worry, be happy, angels brought the MMR vaccine to Earth so doctors could shoot your kiddies with it.

The film, Vaxxed, which has been axed from the Tribeca Film Festival, is all about the MMR (measles, mumps, rubella) vaccine.

Long-time CDC researcher, Bill Thompson, publicly admitted he and his colleagues committed gross fraud, to make the vaccine seem safe, to pretend it had no connection to autism, when it did. They lied. That’s what Vaxxed is about.

So pardon me, but I thought I’d offer some quotes about MMR. Just to keep you in the loop.

“In 1977, 34 new cases of measles were reported on the campus of UCLA, in a population that was supposedly 91% immune, according to careful serological testing. Another 20 cases of measles were reported in the Pecos, New Mexico, area within a period of a few months in 1981, and 75% of them had been fully immunized, some of them quite recently. A survey of sixth-graders in a well-immunized urban community revealed that about 15% of this age group are still susceptible to rubella, a figure essentially identical with that of the pre-vaccine era.” Richard Moskowitz, MD, The Case Against Immunizations, 1983, American Institute of Homeopathy.

At the excellent site, thinktwice.com, long-time vaccine investigator and author, Neil Z Miller, has assembled an impressive cache of information about the MMR vaccine. Here are a few highlights:

More from Neil Miller: “This section contains unsolicited adverse reaction reports associated with the MMR vaccine. They are typical of the daily emails received by the ThinkTwice Global Vaccine Institute:

[MMR114] My 12-month-old received his MMR shot on a Friday. The following Friday he had a 104 degree temperature and became violently ill. The doctor said it was a stomach virus. But on Monday morning he woke up with a rash all over. I took him to the doctor and was very upset to learn that this is very common.

[MMR128] Recently, my 13-month-old had his MMR. He now has constant high fevers and seizures, which he never had. He is a totally different boy. This is devastating.

[MMR176] My friend’s 15-month-old daughter received an MMR vaccine. Within eight days she was hospitalized with a 104 degree fever and a skin rash. My friend called to see what I could find out about Stevens-Johnson syndrome. They told her that her daughter may die as a result of this.

[MMR203] A dear friend lost her 15-month old daughter two weeks after her MMR. She was healthy and showed no signs of illness yet died suddenly in her sleep one afternoon. The post mortem revealed a viral infection and traces of pneumonia, but her mother and I find it very hard to believe that the vaccination wasn’t to blame.

[MMR216] Three days ago my friend’s 15-month-old daughter was hospitalized after experiencing a high fever and her first seizure. The hospital put the baby through a series of tests, including a CAT scan and CBC. My friend told me he thought it was a reaction to the MMR vaccine she recently received. However, the doctors were puzzled as to the cause and disallowed this explanation.

[MMR315] When my daughter was just over one year old, she received her MMR vaccination. Later that day she had a high fever, and I put her to bed. I was busy doing housework downstairs and got this “mother’s intuition” that something was wrong. I rushed upstairs to find her blue and not breathing. I called a nurse. My daughter seemed to be convulsing, so I was instructed to reach down her throat to open her air passage. She was rushed to the hospital and they immediately put her into a cool bath. She was in the hospital for almost a week. Had it not been for my gut feeling that something was wrong, my baby would not be with me today.

[MMR317] Our son developed seizures after his MMR vaccine at 14 months. Today, after two years of anti-epilepsy medications, he has totally regressed. We decided to stop all medications five weeks ago and his grand mal fits have stopped. We are now left with a child experiencing severe constipation and bowel problems.

[MMR321] One week after the MMR shot for my 16-month-old daughter, she had diarrhea. The next day she had three seizures. What steps should be taken once a reaction has occurred. I want to be sure it is documented and the government is made aware.

[MMR398] My daughter had a serious reaction to the MMR shot when she was 22 months. She developed brain damage after a fever of 106 degrees. She also has seizures which are unresponsive to medication, damage to the nerves of her eyes, and learning disabilities that she battles every day. We took her case to court and lost. The doctor who testified on their behalf stated that the government only called him in when they wanted a finding in their favor. What a setup! Of course they don’t have to live with the frustrations and expense of raising these vaccine-damaged children.

[MMR402] Three days after my daughter received her MMR vaccine, she started blinking her eyes and sniffling a lot. She’s been doing this for 2 1/2 months now. Is there a link between the MMR vaccine and facial tics?

[MMR436] My 12-year-old had a seizure within 10 minutes of his second MMR. His head rolled side to side and his arms jerked a couple of times. He was unaware of this, so he must have blanked out. Afterwards, he felt woozy, very tired, and had a headache at the bridge of his nose. Also, his arm that got the shot was numb. The feeling in it gradually returned over the course of an hour.

[MMR443] I have a 15-year-old daughter. I recently moved to the U.S. from the U.K. without her medical records. Upon arrival we were required to give her complete immunizations. I strongly objected, but felt pushed into re-immunization because of state laws to get her into school. After her second MMR she has been complaining of dizzy spells and continuous headaches. Is there a link between over-immunization of MMR and this sickness?

[MMR509] Today, shortly after I was inoculated with the MMR vaccine, I began feeling faint and short of breath. After ten minutes of holding my head between my knees in a dirty gas station bathroom, I decided I could drive the 20 miles home.

[MMR518] I had an MMR shot about three year ago and have suffered from many reactions to this vaccine since.

[MMR552] When I was a child I was given the MMR vaccine. Almost seven days to the hour I became ill: fever, sweats, throwing up even the slightest amount of fluid or food. This went on for a month or so. The doctors would not even consider that the shots caused the illness. Later, they wanted me to have the second MMR; my parents refused. The doctors went through the usual tantrums and said I wouldn’t be able to attend school. When my parents said ‘Fine, he won’t go,’ the doctors gave in. At about the age of 18, I had a blood screening and was told I didn’t have all of the MMR vaccine. Forgetting the episode as a child, I let them give me the shot. Seven days later I was sick again, but not as severe.

[MMR580] My college refused to admit me without an MMR vaccine. I had a terrible reaction and was rushed to the hospital with piercing screams, a high temperature and delirium. Now I have trouble focusing, and can be scattered and forgetful. I can’t stand change and don’t seem to have the energy and drive that I once had. My family thinks I developed obsessive-compulsive disorder. I am very bright, but nearly blew my scholarship after the shot.

[MMR588] I was told by the nursing school where I am enrolled, “No vaccine, no school.” Even though I had all the normal vaccines as a child, I was unable to show this. Five days after I received the MMR vaccine, I was so ill that I ended up in the emergency room. The doctor told me that the MMR did not cause my sickness, and my nursing school supervisor said it was a virus. Why does the medical establishment deny vaccine reactions? Why can’t they tell us this important information and let us make educated responsible decisions. The irony is that I got the vaccine and now I’m so sick that I can’t go to school.

—-But all the quotes I’m giving you in this article—they must be wrong. They must be. The authorities know what they’re doing. They always do. Of course. They would never feed us false information. Everything is good. How could it not be good?

Never listen to mothers of those children who end up with brain damage after getting a vaccine shot. All these mothers must be lying. Of course they are. They don’t actually care deeply about their own children. Right?