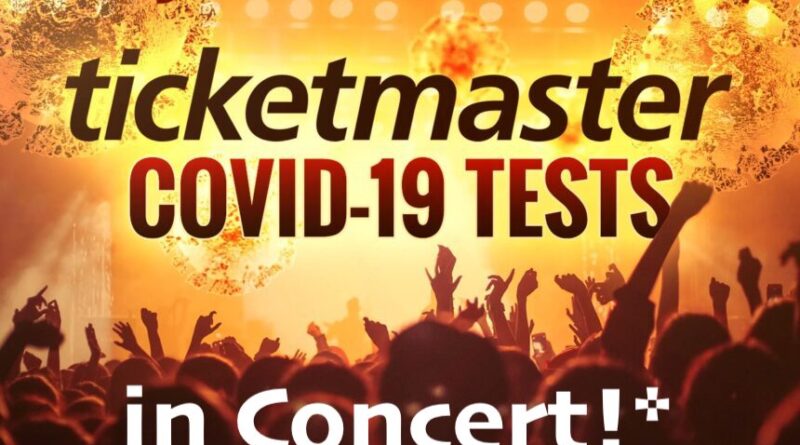 Ticketmaster has a plan.

In order to open up venues and stage music concerts again, audience members would have to show proof of vaccination or a recent negative virus test. Otherwise, they wouldn’t be able to purchase a ticket.

Perfect. A stadium full of obedient, self-congratulating sheep. What will the musicians be playing? Funeral marches?

But this is only step one in the larger process. Think it through. Eventually, no one will have to show proof, because, beyond Ticketmaster’s manipulations, EVERYONE’S medical status will be accessible on a database.

That’s what these “show-proof” training exercises are conditioning people for.

This IS the new world order in action. Want to shop, get a haircut, fly, go to the office, enter a public space? You’re already tagged. AI has you in the database. You’ve been tested or vaccinated, or no dice.

So if you think rebellion is unnecessary, think again. The world locked down, up, and sideways: technocracy loves you only if you obey.

Biden’s nightmare COVID task force is taking shape, as his handlers keep propping him up and pretending the election was on the up and up. Dr. Michael Osterholm, playing the stern schoolmaster, is painting a picture of a dark winter; he wants a national lockdown in all states. EVERYBODY would go on federal welfare, to tide them over, until the experts say it’s safe to tip-toe outside.

No problem. Just stop the whole economy. We didn’t really need it anyway. Only deplorables want to work.

Another new task force member, Dr. Zeke Emanuel, who is, of course, a bioethicist, has stated in the past that 75 years of life for any individual is quite enough. After that, it’s time to die. No reason to take up space.

Does he know Biden’s age? Does he know that the overwhelming percentage of so-called COVID deaths is occurring in the elderly? Perhaps he does. He certainly should. He’s an expert.

Therefore, he’s not only a bioethicist, he’s a population reductionist. Exactly the man we need to “lead the response to the virus.” It’s easy: let the elderly die. That takes care of that. The simplest solutions are often best.

We can assume the Biden task force will push for a MANDATED COVID vaccine. After all, it’s already paid for. The leading candidates are RNA vaccines. The technology has never been approved for any prior drug or vaccine. It’s experimental.

Let’s see. A vast experiment, commanded from Control Central. A whole nation of guinea pigs, under the gun to take the shot. Does that remind you of a past precedent in, say, Germany?

I’ve spent the last nine months, in over 200 articles, dismantling the lunatic fairy tale of a “pandemic,” from every significant factual angle. The SARS-CoV-2 virus has never been proven to exist. The PCR test spits out false-positives like coins from a rigged slot machine, thereby creating fake case numbers, which are used to justify the lockdowns and the economic devastation, which happens to be the real aim of the operation.

COVID is the latest titanic tremor in a long series of globalist shocks aimed at civilization.

One of the prominent features of the disintegration we’ve been witnessing is the cancelation of all rational debate. This nihilistic approach asserts that an idea is worthless if the person advancing the idea has a “personal flaw.”

Aside from the puerile fallacy of attacking the person and failing to examine the idea, the whole campaign is mindless, because every person can be criticized for having a flaw. Therefore, no idea under the sun is worth considering or putting into practice.

At the bottom of this rabbit hole of anarchy, we finally come to Good versus Evil.

Remember the story of St. George and the Dragon? Here is an abridged version:

This vile creature, who lives in a pond, controls a city of terrified citizens. It emits venom into the water and the earth. The people offer sacrifices as placation: their animals, and then their children. But this effort fails. Finally, the king’s daughter, the princess, is sent to be devoured by the dragon—at which point St. George arrives. The princess, in an act of astonishing sacrifice and purity, tries to send St. George away, in order to protect him. He refuses. He charges the dragon and wounds it with his lance, and then beheads it with his sword.

The triumph of Good over Evil.

But in our world, for a long period of time, many successful operations have been carried out, to transform people into the dragon.

Large numbers of citizens now view The Good as the enemy.

What is good and pure and righteous must be destroyed.

In our city, the perception becomes: “the population is being controlled by St. George, and the dragon arrives to save the day.”

This reversal of Good and Evil, of course, is invisible to the “normals,” who have been trained to believe in official authority.

This tyranny will fall.

“Of all tyrannies, a tyranny sincerely exercised for the good of its victims may be the most oppressive. It would be better to live under robber barons than under omnipotent moral busybodies. The robber baron’s cruelty may sometimes sleep, his cupidity may at some point be satiated; but those who torment us for our own good will torment us without end…To be ‘cured’ against one’s will and cured of states which we may not regard as disease is to be put on a level of those who have not yet reached the age of reason or those who never will; to be classed with infants, imbeciles, and domestic animals.” CS Lewis, 1948.

This tyranny will fall, and as it does, the kind smiling face of the leader, the blank face of the bureaucrat, the arrogant face of the scientist will show their dragon’s rictus behind their masks.

The COVID lockdown fraud; the economic devastation; the march toward socialism; the anarchy of looting and burning and assault; the technocratic slavery of surveillance; censorship of truth; the forced unification of collectivist thought; all parts of the same fascist obsession for control.

Those who know freedom are resisting, and will resist. A critical mass is drawing closer. Force from above will not deter it. Evil is overplaying its hand.

You and I are not on this Earth to give in.

The sun does not rise in the morning to shine on eight billion domesticated human animals.

The sun does not choose to shine only on the rancid scum who want to rule us.

The war of thousands of years to establish individual freedom was not fought so we could lay freedom aside like some tired possession. The freedom of each one of us is always there, waiting to be acted upon.

It never dies. In spirit, neither do we.

“The summer soldier and the sunshine patriot will, in this crisis, shrink from the service of their country; but he that stands by it now, deserves the love and thanks of man and woman.” Thomas Paine, October 23, 1776.