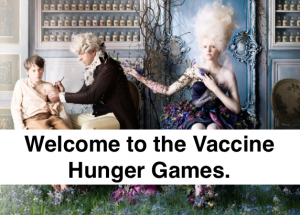 “The combined death rate from scarlet fever, diphtheria, whooping cough and measles among children up to fifteen shows that nearly 90 percent of the total decline in mortality between 1860 and 1965 had occurred before the introduction of antibiotics and widespread immunization. In part, this recession may be attributed to improved housing and to a decrease in the virulence of micro-organisms, but by far the most important factor was a higher host-resistance due to better nutrition.” —Ivan Illich, Medical Nemesis, Bantam Books, 1977

2.3% of kids in Los Alamos public schools don’t get vaccinated. Their parents have received exemptions.

That’s the highest rate of non-vaccination in the state.

We’re talking about parents who work at the US Los Alamos Labs.

People with advanced degrees in science.

People who work for the federal government.

You would think the vaccine rate in that environment would stand at 100%, no questions asked.

What do these people know? Why are they opting out of vaccinations for their kids?

Those are hard questions to answer. Very hard.

Hmm, let’s think. For example, have they done some actual research on their own, and have they decided that vaccines are unsafe and ineffective?

No, that couldn’t be it. Of course not. Who in his right mind would come to that conclusion?

It must be this: these sober PhD federal scientists are being driven into fear by wild-eyed anti-vaccine lunatics. Yes. That’s it. Of course.

These obey-the-government-at-all-costs scientists have gone off the rails.

At Los Alamos Labs, where they do nuclear- bomb and disease research, there must be a Terrorist, whose mission is to subvert “vaccinations for everybody” and, by this covert tactic, aid a revolt against vaccinations and thereby allow the whole USA to succumb and die off from…the measles and mumps.

Finally. We’ve gotten to the bottom of it.

Call in the FBI and DHS. Surround Los Alamos Labs with tanks. Lock the place down.

Send in brave men and women wearing hazmat suits (protection against measles and mumps) to find the Terrorist and take him, dead or alive.

While I was writing my first book, AIDS Inc. (*), in 1987, I began interviewing people about their health. These interviews branched out into areas that had nothing to do with AIDS.

(*) (AIDS Inc. is included as a bonus in my The Matrix Revealed and Power Outside The Matrix collections.)

I discovered a number of people who were in excellent health and had never received a vaccination.

Of course, “medical science” rarely if ever concerns itself with people who are heathy and how they got that way.

One common factor emerged in my interviews with very healthy people: good nutrition.

The more people I spoke to, the more obvious something became:  non-medical, naturally acquired immunity to disease could become a serious problem—for the medical cartel.

This is a quite insane approach.

Yes, many people around the world don’t have access to the foods that constitute good nutrition.

Regardless, if the goal is really excellent health, that underlying aspect must be addressed. There is no way around it.

You can’t say, “Well, for those unfortunate people, we’ll give them immunity with vaccines and guard their health with drugs.”

That’s preposterous. It doesn’t work. It only makes things worse.

The current rabid campaign in the US to inject every human with a whole host of vaccines is sheer madness (*). It intentionally ignores the fact that natural immunity should be the goal, which can only be achieved through non-medical means.

(*) (And, I might add, the people at the National Vaccine Information Center Advocacy Portal are doing a superb job of tracking this rabid madness. I urge you to check them out.)

To cover up this essential fact about health, public health agencies, doctors, and the pharmaceutical industry assault the population with ceaseless propaganda implying that everyone is sick or on the verge of becoming sick all the time.

Well, guess what? Your body is your own. It’s undoubtedly more your own than anything else you possess.

Apparently, this fact needs reaffirming in these times.

Unless, of course, you believe the State owns your body and can inject it with anything it wants to.

Propaganda operations are designed to elicit fear. The fear of getting sick and, therefore, the need for vaccines, is not enough to persuade the whole population to fold up and follow orders.

So the campaign has added a layer: many states are considering bills that would make vaccines mandatory. In this case, the fear of law enforcement would be the goal.

For some, that equals Paradise.

But at Los Alamos Labs, that’s not the case, at least when it comes to vaccination. On every other issue, all the scientists there play strictly by the book.

But vaccination? Protecting their kids from injections of germs and toxic chemicals? Some of those scientists have figured that one out.

This is called a Clue.