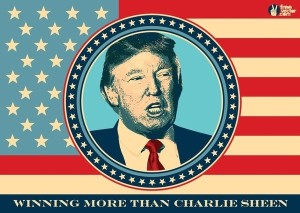 Because they live in a bubble of their own making. That’s why.

And in that bubble, everything about America is manageable. Things can get worse, but then they get better. Money is tight, then it’s loose. Employment figures drop, then they rebound. Wars start, and then they end.

Looking at the country and the population through the wrong end of the telescope, these media creatures feel themselves positioned high above the madding crowd. To them, phrases like “street smart” and “savvy” are the closest they get to anything real.

Occasionally, they remark that people are restless “out there” and looking for a change—as if Obama, with his massive slogans, somehow supplied that need for eight years and solved the whole problem for a while. As if the problem was simply a psychological kink that needed to be worked out.

So naturally, these down-their-nose puffed-up media morons didn’t notice that “things” were actually getting worse, the employment figures were being cooked, month after month, the Globalists with their trade treaties were stealing the whole economy, and had been for decades. Naturally, they didn’t notice that a normal political “correction” wasn’t going to fix America. They didn’t notice that, in a nation where, at minimum, 40 million immigrants already live, people were getting tired of being told they had to be more generous and let the southern border of the US swing open and stay open, or be labeled outright racists. The media puffballs didn’t appear to notice that the political Left was becoming more comfortable with the idea that all private property (except their own) was some sort of crime and ordinary straight-ahead non-crony capitalism was another crime, and earning a living on one’s own was yet another crime, because entrepreneurs and small-business owners “didn’t build that.” They didn’t notice, in other words, that the Left was nudging political discourse and public opinion and “morality” in the direction of funneling more and more of the population into the arms of the central government, as a permanently dependent class. Or if they did notice, they assented to it, because it was trendy and “humane.” They didn’t notice that huge swaths of America were sick and tired of overwhelming federal authority. They didn’t notice that the overwhelming majority of gun owners weren’t shooting people, and resented being lumped in with killers, and objected to efforts to squeeze their 2nd Amendment. Nor did the media morons notice that large elements of the population weren’t buying into psychiatric mental disorders or pop psychology as a way of life in a kinder gentler (drugged) society, but instead were determined to live their own lives with forward-looking energy. The media morons failed to notice that the attack of political-correctness creatures was being sloughed off and laughed off by increasing numbers of people who had no intention of censoring themselves.

Therefore, it shouldn’t have come as a surprise that Donald Trump, whom the media created as a cartoon of final judgement (“You’re fired!”—The Apprentice), would start firing all sorts of people in real life, with success.

But it did come as a surprise.

Because the media puffballs couldn’t imagine that a loose-talking devil-may-care-character would emerge on the scene and speak to the needs and frustrations of so many Americans—and bypass them, the media kings.

Even worse, some Americans who didn’t agree with Trump and didn’t believe he was for real were still liking him, simply because he was cutting across the grain, he was talking back to media and telling them where to get off.

He was violating secrets of the media temple, matter-of-factly saying vaccines could cause autism, and promising to pin the blame for 9/11 on the real killers. He was refusing to go along with the gun-control crowd. He was blowing up the acceptable garble called political discourse. He was talking dismissive smack at his Republican opponents and at Hillary. He was saying the Globalist trade treaties were national sabotage and economic suicide.

He was his own media outlet.

And his ratings were soaring.

After Super Tuesday, he hit the top of the charts.

“But we’re the town criers. We announce the news to the townspeople. We take our orders from the princes and kings and spread their messages. We’re the eyes and ears and mouths of the public. We set the boundaries. We determine priorities and proprieties. We’re the civilized ones. We maintain order. We re-invent language. We decide what can be debated. We choose the representatives of each side. We own the space of The Discussion.”

It doesn’t have to be the way it was.

A cowboy can parachute out of the top of his own tower, and as he descends past his financed and re-financed and formerly bankrupt suites—talking, always talking—as he floats past the mafia-controlled concrete of his structure—talking, always talking—he can broadcast a code to the frustrations of millions of unknown people; and they will respond, because the very media that has been hating them all these years is, somehow, wriggling and moaning at the end of the cowboy’s whip.

The media should have known this was coming, but the media never knows. Pale and dead, it imitates a world of its own making.

Exposed, that’s all it has.