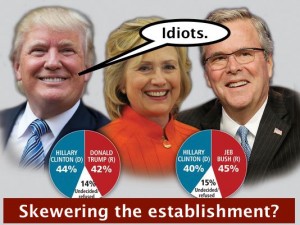 Being a real populist just got real.

Trump. He’s for real. No he isn’t. He means what he says. No he doesn’t. He’s a joke. He’s serious. He’s a liberator. No, he’s the next Mussolini. He’s sane and lucid. He’s off his rocker. He cares about people. He’s a racist. He’ll take American back where it belongs. He’ll drive it over a cliff.

Whatever you think about the man, his campaign has just acquired a new level of reality, after his victory in South Carolina. And the people who were looking to destroy him have greater reason to pursue their goal.

I’m not just talking about the Republican Party bosses. I’m talking about the Rockefeller Globalists, who are watching Trump attack their trade treaties, as he vows to bring jobs back to America. Those treaties are the Globalists’ holy of holies. They’re portals to an emerging world of much deeper poverty and suffering—and as such they’re vital to a new grotesque Globalist planetary order.

Trump now has a straight shot at the Republican nomination. Apparently, nothing he says, short of claiming God and Jesus are fairy tales, will affect his poll numbers.

One line of attack against him would occur at the nominating convention. If the GOP honchos, by hook or by crook, can keep Rubio and Cruz in the race, they might be able to enter the Quicken Loans Arena in Cleveland, in July, with split numbers—no clear winner. After that split vote holds up on the first ballot, all bets are off. The brokers will move in and start making deals behind the scenes. Delegates can switch their positions.

The main target would be Cruz. Promise him the moon; get him to release his delegates and declare he favors Rubio, who is the GOP’s man. Rubio is who the Party bosses want.

But if Cruz stands firm, and if two or three more ballots fail to produce a winner, then the GOP would do a switch and tell Rubio that, for the sake of the Party, he has to fall on his sword and instruct his delegates to line up for Cruz. In other words, the GOP will do anything to stop Trump, including losing the general election.

A scene like this at the Republican Convention would enter a new kind of hell. Trump supporters, seeing the theft of the nomination in real time, ballot by ballot, would blow the roof off the Arena.

If Trump enters the Convention with the nomination locked up, or if he emerges the winner after a few ballots, the GOP will face a dilemma. Should they back him to the hilt or back away, undermine him, and let Hillary demolish him in November?

On his part, if Trump sees his own Party betraying him, he can go directly to the American people and tell them what’s happening—and how this is clear evidence that the Republican GOP needs a complete overhaul—a feat he promises to accomplish. Then, even if he loses the election, he’ll become the de facto leader of his Party, and the bosses will feel his wrath. This is what the GOP honchos fear most. They can handle losing the election, but being thrown off the ramparts of their little fiefdoms and crashing on the rocks below, rattlesnake blood oozing from broken veins…that would be the ultimate devastation.

Meanwhile, the Globalist elite are lining up and considering their options. How about a straight assassination? Donald has a heart attack in a hotel room. Or at a ranch in Texas. Probably better to choose another state. Obviously, the uproar over a stolen nomination at the Quicken Arena would be nothing compared with the fallout from a hit. The very pillars of the “democracy” would fracture.

There is always an upside to chaos, from the Globalists’ point of view, but other options may be open.

If, by some miracle, he wins the nomination and the general election…

A sit-down with Trump. Now. Just in case. Explain to the man that trade treaties, once signed, can’t be thrown in the trash. They’re legally binding. As President, Trump would face unconquerable opposition on that front. However, how about a deal? Donald’s strong suit. Certain accommodations can be made. Negotiations with China and Mexico, to gain a “somewhat more favorable trade balance” for the US. Looks good, seems good, and it is good, in a limited context. Nothing overtly radical. But a political victory. The trade treaties remain undisturbed. NAFTA, CAFTA, GATT, TPP are in place. Bring some, but not many, manufacturing jobs back to the US. A few mega-corporations will cooperate. Again, looks good, seems good. The press will issue compliments.

“It’s the best you can hope for, Donald. You’re a businessman. You’re, above all, sensible. You can get something, or you can try for the moon and fall out of the sky and crash and get nothing. Use your mentality, step up to reality.”

“As for the Big Wall along the Mexican border, you can put up a short piece of a wall, Donald. A showpiece. Great photo-op. Mexico will pay for it, sort of. You know how that works. And then you can stem part of the flow of immigration. Just enough to make a difference, if we massage the numbers. You’re good, we’re good, it’s a win-win, which is what every deal aims for.”

Understand that these Globalists can be very persuasive, because they’re smart and reasonable, and they already hold many cards in the deck. As with any major crime organization, they present “the client” his options, given the shape of the landscape in which they are the kings and the princes.

It’s a re-make of Godfather One. Brando has mob power. Given his position, he’s a reasonable and generous and even caring man—as long as the supplicant comes to him with respect. And if the supplicant himself is reasonable, so much the better.

Does Trump truly understand what being a populist means, according to a definition few men can fulfill? It means going back to the people every time a bribe or compromise is offered to him and explaining it and denouncing it and rejecting it and demanding that the people support him, as he goes up against the Olympians of this world.  It means exposing the real art of the real deal.

Is Trump that man? Is it possible? The Globalist crime bosses of deep politics have no doubts. They’re sure he isn’t. Why would he be? His whole career has been based on wheeling and dealing to arrive at his objectives. They see him as just another client.

“All right, Donald, we can give a little on trade imbalances and immigration. But look on the bright side. You can command the Armed Forces. Here’s a list of targets you can bomb with impunity. You can act tough and talk tough. You can protect the security of the United States and ratchet up your poll numbers.”

I’m sketching these deals in order to reveal the difference between a real populist and a fake one. There are almost no real ones in politics, because the price they have to pay is too high. They have to return to the people, over and over, and tell them about all the temptations that are being laid out and offered on the golden table—compromises which will essentially change nothing, but instead will derail efforts at true reform.  Real populists would have to take their case, over and over, back to the people, and if necessary shatter the foundations of “political business as usual.”

They’d have to wear a real suit of armor and ride on a real horse.

They’d have to make a commitment that exceeds anything they ever imagined.

There is campaign talk, election talk, and Presidential talk. The first two are easy. Even Presidential talk is easy for a sold-out occupant of the Oval Office. He can do it in his sleep. The script writes itself. But when was the last time a true rebel took control of the White House? When was the last time a man went up against the Globalists while wearing the mantle of Commander-in-Chief?

If you don’t understand Globalism, look at operations designed to look like humanitarian heraldry while decimating economies, cultures, traditions, health; while inducing broad chaos behind which a “new order” can emerge to “solve the unrest.”

Look, for example, at the fraudulent climate agenda (lowered energy production for the whole planet); the “migration wave” (a cumulative chaos-inducer); the destruction of education systems (addled minds incapable of following a line of thought); medical care (kills 2.25 million people each decade in the US alone); “free trade” (allows mega-corporate plunderers to roam the world and wreak havoc on local producers and national economies).

These and other operations are woven together to soften up the world population and make control far easier to implement, from above.

Every US President discovers at least some piece of this overall enterprise. Every President is vetted and mentored, so he grasps what he can he do—and what is off-limits and untouchable.

Trump, the fast-talking cowboy, has been stepping on the third and fourth and fifth rail of politics. The places where no one is supposed to go.

If he keeps winning Primaries, he isn’t whistling Dixie anymore. He’s in no-man’s land. He’s trampling out the vintage where the grapes of wrath are stored. He’s got blood on his shoes. He’s entering the mountain cave of the kings and princes with a handful of ideas he’s been mouthing, without concern for consequences—ideas he’s apparently now beginning to believe in. He’s no longer a happy-horseshit warrior. He’s no longer singing and tap-dancing in the rain.

He’s triggered the early warning system, and they’re waiting for him.