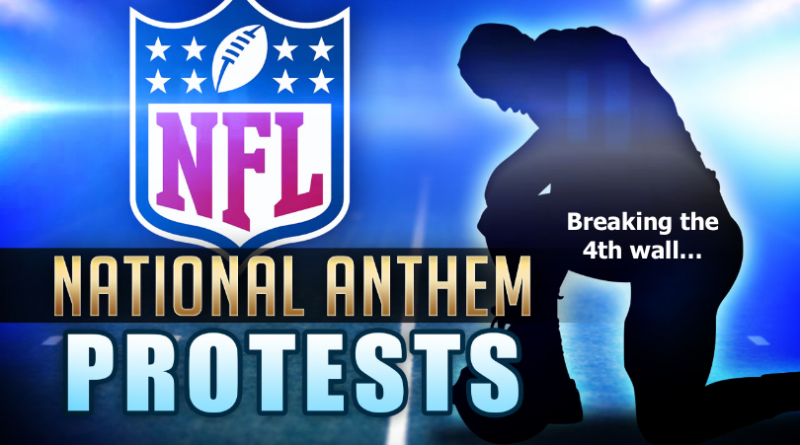 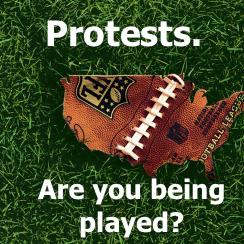 Players are standing up with arms locked, they’re sitting, they’re kneeling, they’re staying in the locker room during the National Anthem, a few owners have come out of their high offices to join with the players on the field, the networks are suddenly airing the pre-game Anthem because TV viewers want to see the protests and it’s all about ratings and ad revenues; viewership for the games is down, one quarterback who stayed with his team in the locker room confessed he wanted to be out on the field and didn’t want to be known for protesting the Anthem, Trump praised fans in the stands for booing the players, it’s a party, a circus, it’s theater, so who’s winning?

According to counts and a survey, 70% of NFL players are black, and 83% of NFL fans are white.

One biracial player, Colin Kaepernick, started the whole business by kneeling during the National Anthem, to protest police brutality against black people.

Colin Kaepernick’s original message, whatever you may think of it, has exploded into pieces all over the landscape. Now people are talking about the flag, the Anthem, patriotism, the veterans, ungrateful millionaire athletes, “unity,” the League, the Commissioner, racism in general, and Trump as a slavemaster according to Jesse Jackson.

But don’t worry. We’re assured these football protests are part of engaging in a “national dialogue on race.”

How many times have we heard that one before?

What dialogue? The whole country is going to assemble in the geographical center of America and begin talking earnestly to one another?

Yes, Trump is “energizing his base,” as they say. But he’s also gleefully attacking the NFL team owners, some of whom were/are his pals. He likes that kind of theater. He’s sticking the owners with the nasty job of defending the players. If the owners remain silent and go away and hide, they’ll be seen as racists. That’s not a good look. So a few of them appeared on football fields Sunday, “standing in solidarity” with their teams. Now they can run away and hide.

“Jeeves, tell my pilot to gas up the jet. I’ve done my duty. We’re heading to the Cape. Let the staff know they’ll have to open up the summer house again…”

Trump also wants his enemies everywhere to understand he’s willing to attack anyone, even the rich owners of NFL franchises. Fallout, no fallout, he doesn’t care.

So today, a Pittsburgh Steeler offensive tackle few people have ever heard of, a decorated ex-Army Ranger, Alejandro Villanueva, is the most popular player in the League, because he didn’t stay in the locker room with the rest of his team during the playing of the National Anthem. He came outside and made himself visible on the field. Suddenly, his jersey has shot up to number one on the best seller list of NFL merchandise.

That 80% of white fans are buying it.

This is supposed to be part of the “national dialogue,” too?

(Update: Villanueva has now apologized for standing alone and “throwing his teammates under the bus.” What’s the policy on returning NFL merchandise?)

The strategic winner in this big NFL story, so far, is Trump. His America-first rhetoric is making a bigger impact than all the NFL protests.

Joe Scarborough, MSNBC: “This may be unpopular but it is a political reality. Every NFL player refusing to stand for the national anthem helps Trump politically.”

Of course, the rest of the politically Left media echo chamber refuses to acknowledge that. The echo-chamber denizens always try to convince themselves they’re creating and owning and controlling the narrative.

“If we say the NFL player protestors are smacking Trump down, the American people will believe us.”

Yes, just as people believed the echo chamber when they elected Trump over Hillary “nothing is my fault” Clinton.

Of course, the echo chamber has to drown out a few voices. For example, a player many think is the greatest NFL athlete of all time, hall of famer Jim Brown: “I’m going to give you the real deal: I’m an American. I don’t desecrate my flag and my national anthem. I’m not gonna do anything against the flag and national anthem. I’m going to work within those situations. But this is my country, and I’ll work out the problems, but I’ll do it in an intelligent manner.”

Hmm. That doesn’t work for the preferred narrative, so put it on the back page.

Where is the wild NFL-Trump-media theater piece heading? It’s obvious, isn’t it? More supporters for Trump. More voters on his side.

And who wants that?

The Russians! Yes. Now we see the light. Vladimir Putin is behind all these NFL player protests because, as a chess player, he understands the end game: Trump wins.

Is WikiLeaks going to play a role? We don’t know yet. Stay tuned.

I’m sure James Comey will fit right in. He can return and testify before Congress:

“Well, we know Ivanka Trump met with Putin eighteen months ago. At the time, he expressed an interest in buying the Dallas Cowboys, with gold bars he found in a Venusian UFO that crashed in Siberia. But then the conversation turned to the possibility of triggering player protests, as a way of garnering support for Donald Trump…”

Putin is also behind Black Lives Matter, Antifa, incidents of violence, riots, cops being shot, because all that, too, will swing support over to Trump.

Note to John McCain: Get moving, John. Put together the Committee hearings on the Hill. We’ve got our man. Putin. We’ve got the tiger by the tail…